The Bridges of New York City 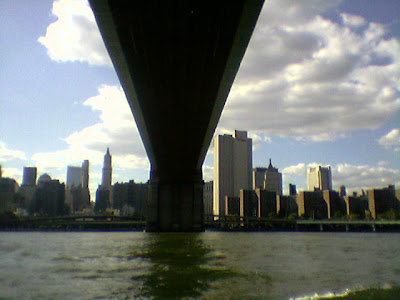 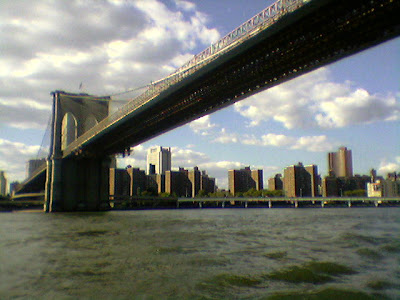 Captain Chase called on Friday afternoon and announced that he was unexpectedly staying in the greater metro area for labor day weekend, so how about going for a sail? Within minutes I had convinced him to spend the whole weekend tooling around New York harbor on his comfortably appointed yacht, Salomé, with me as first mate, and so early Saturday morning we headed up to Mamaroneck, NY, and set sail for the 79th st. Boat Basin. It was just coming on high noon. 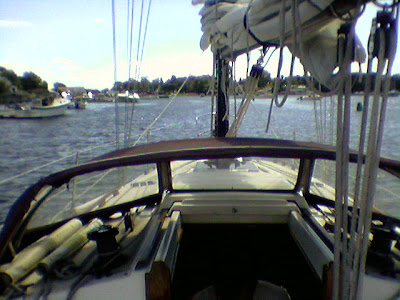 Once out on Long Island Sound a light breeze propelled us gently westwards towards the Throg's Neck bridge. Watching the tide charts and anticipating the vicious currents of Hell's Gate in the upper reaches of the East River, we reluctantly fired up the diesel for a bit of motor-sailing, lest, thanks to our languid pace, the day slip entirely through our fingers. Soon we were passing Riker's Island. On the horizon the Empire State building, homesick view of the lonely incarcerated, presided over a cluster of midtown Manhattan buildings. The jets of LaGuardia roared over our heads before we reached the churning waters of Hell's Gate, where the end of the sound collides with the East River in a turbulent unpleasantness of standing waves and wakes that bounce back and forth between the stone walls of the river channel. 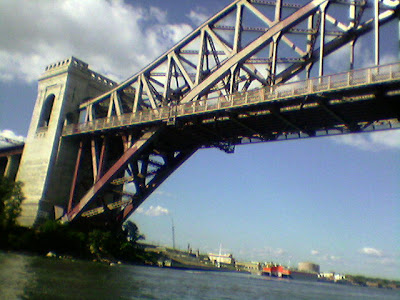 The tide was rushing out, and Salomé positively churned down the East River sluice, passing at a breathtaking ten knots the parking-lot like traffic of the FDR drive, a line of cars cramped and fuming off our starboard side. We zipped under New York's best and most beautiful bridges, the Queensborough, the Williamsburgh, the Manhattan and lastly the majestic Brooklyn. Passengers on the passing Circle line tours waved with envy. 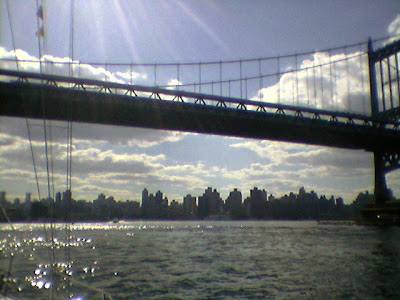 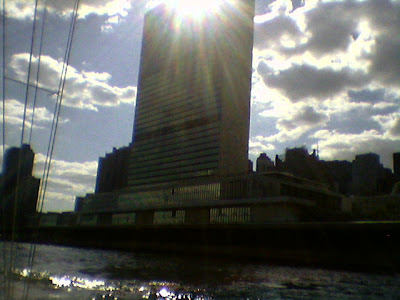 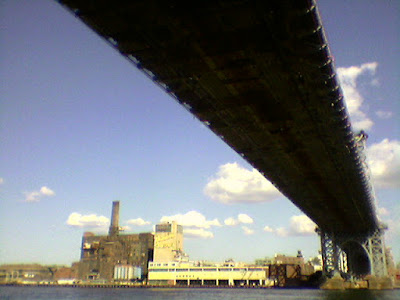 At Five PM or so we shot past the Battery, jousting with the Staten Island Ferry as we spied my beloved Red Hook tucked into the Brooklyn shoreline beyond Governor's Island. The tide was still running hard, both in the East River and the mighty Hudson, so we had ample time to admire the skyline of the business district and ponder the void where the twin towers once stood. In fact, now northbound, we appeared not to be moving at all. Under full power and with the mains'l set, we imagined that a tortoise strolling up the west side esplanade must make more progress. A planned rendezvous at eight at the Boat Basin, a mere ninety blocks or so north as the taxi drives, seemed suddenly optimistic. As we fought our way to Houston St. it was nearing seven. There, amongst the bobbing boats of a small mooring field just to the south of the enormous parking garage where, decades ago, I parked the once-trusty Buick Skylark, we spied an unoccupied mooring. We pulled in and tied up, tired of beating our bow against the outflowing Hudson. Thank goodness for cellphones. Plans have changed, we announced. Meet us at the parking garage at Houston St., not at the boat basin. We're sorry, that's how it goes; put it down to the vagaries of a life at sea. Stay on land if you don't like it! We rowed ashore to purchase provisions (beer) on Varick St., wandering a city newly discovered from the water, fresh-eyed like conquistadors. Back aboard: twinkling lights, an evening slack-tide sail, grilled olives, salume and prosciutto.

On the morrow, Joey Atlas arrived just after dawn, with bagels. Up went the sails and off we drifted, slowly, downstream. There was not a puff of wind. Rigging the spinnaker pole and hanging that voluminous, parachute-like sail in a futile attempt to eke out some progress, we considered our options while watching the unruly acre of silk sink until its front edge was dragging in the water. Some voted for anchoring and swimming in the sandy-bottomed waters of the Bay Ridge flats. Others for anchoring and eating snacks. But Joseph smelled wind. And indeed, just when the rest of us had resigned ourselves to parking the ship and tucking into a relaxing gourmet lunch, a stiff breeze materialized from out of nowhere. Or rather, out of the direction of Sandy Hook, New Jersey. We are not here to eat, commented Joe, who by now had taken over the tiller and was gazing intently at the wind indicator atop the mast. What a maritime Mussolini he turned out to be.

"Il Duce" of the high seas: Mussolini in a beanie

As the wind rose the commands came thick and fast: "Trim the main!" "Ease the jib!" "Ready about!" "Hard a Lee!" Salomé responded well, like a perky pony, leaping forward before the breeze, pointing her nose hard to the wind as we tacked towards the Verrazano Narrows. Slinking for'ard to avoid this tyrannical tirade, I lay in blissful sunshine at the foot of the mast, staring up at the taught, full sails. Once under the mightiest of bridges, we came about, and launched the spinnaker anew. Now she filled easily and pulled us foaming through the water. Ahead two Staten Island ferries crossed paths, and as we turned the corner of Bay Ridge the New York skyline came back into view, capping off a glorious voyage. 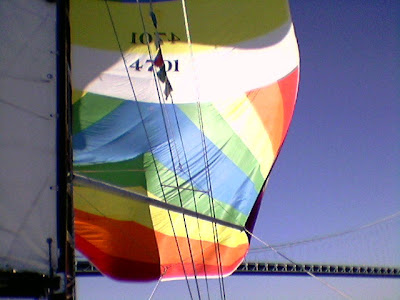 The spinnaker flying in the Atlantic Ocean, just outside the Verrazano Narrows Bridge 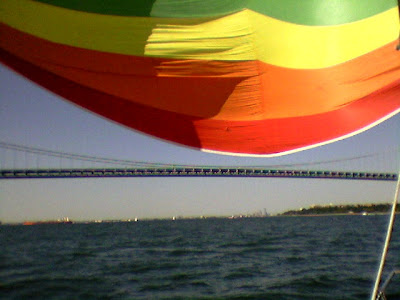 Yet another outstanding blog. If I could find bridge partner like yours I might still be playing.