"...a watchman saw smoke coming from the church, entered and found the body of the Rev. Mariano Arroyo Merino in his room lying on a burned mattress, and he picked the man up to get him out of the room before he discovered that he was dead and soaked in blood."
-- from the Latin American Herald Tribune 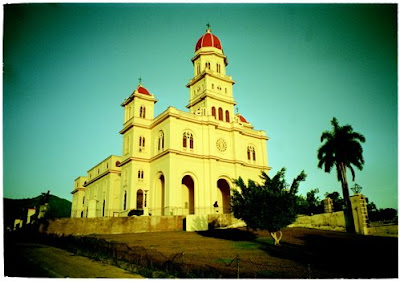 "El Cobre," the cathedral-sized chapel outside Santiago de Cuba, venerated by Catholics and santeros alike. (But take note: the two forms of worship are in no way mutually exclusive).

In a demonstration that truth is always stranger and more perverse than fiction, a second Spanish Catholic priest has been murdered in Havana, some five months after a first gruesome torture-murder. The possibly serial nature of the crime, with its threat of further victims to come, makes this the perfect case for Leonardo Padura Fuentes' thoughtful, and in this instance unfortunately fictional, Lieutenant Mario Conde.

We learn from ABC news Spain a detail: the murdered septuagenarian was "an expert in religious syncreticism." Furthermore, the neighborhood of Regla, where he preached, is known throughout Cuba as a stronghold of santería. Despite rumors, the seventy-one year old Colombian vicar of Christ the Redeemer (Cristo Redentor), who was to have substituted for Arroyo Merino at the church in Regla during the latter's upcoming vacation in Cantabria, "denies the existence of any bad relations between the santería community and the Catholic congregation."

I envision a novel in which the dominance of the Spaniards within Cuba's Catholic Church, set against a backdrop of resurgent religion in the post-Soviet era, becomes a metaphor for the still-scabrous wounds of colonialism. Followers of the politically correct tendency in Miami santería, which increasingly dismisses any European component within the religion of the African saints, calling it a whitewash, manifest themselves in Regla as a violent fringe movement. It will take Mario Conde to penetrate this murky world and uncover the conspiracy.

If Padura Fuentes doesn't go for it, maybe I'll write it myself.