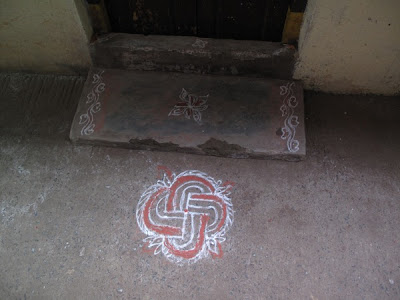 Any country as large as India has profound regional variations that are manifested in culture and politics, tugging and teasing at the fabric of national unity. Kashmir is only the most obvious example. Around Darjeeling, in the Himalayan foothills, the original citizens of the mountains have more in common with the Nepalese and Bhutanese they are sandwiched between than they do even with the other residents of their own state of West Bengal. They want autonomy, and a state, to be called Gurkhaland. One senses that independence from India itself would be just fine with them. In the vast south, over much of peninsular India, the people speak Tamil, militantly avoiding Hindi in the manner of Barcelonans refusing to speak Castillian. They enjoy the most progressively vegetarian cuisine on earth (meat-serving restaurants are labeled "non-veg"). They are darker skinned, and have their own burgeoning movie industry, threatening the supremacy of Bollywood. It's called Tollywood. T for Tamil.

My friend and sister-in-law, Melanie Dean, speaks Tamil, and she is an expert on much of what is distinct in the region. Her doctoral dissertation, recently completed, and which she will be defending before the august sages of the Uni of Penna tomorrow,  discusses Tamil Nadu superstitions related to the concept of the "evil eye." In Tamil culture, an excess of admiration is often interpreted as a possible threat to the thing admired. For instance, it is considered very bad form to goo and gush over a newborn, complimenting it on its good looks, chubby cheeks and overall deliciousness. Your envy is showing, and you likely mean the child harm. (I wish a bit of this would rub off in Brooklyn, where the abundance of children one is all but required to lavish with praise quickly becomes exhausting).

I'm a sucker for whatever bits of voodoo and hoo-hah survive into our more and more culturally homogenous iPad age, and while in Tamil Nadu recently (I'm just back as of three days ago) I kept my eyes peeled for manifestations of popular belief. I wasn't really sure what I was looking for, so I just snapped photos of things I don't see in Red Hook every day. I then sent the snaps along to Melanie. Knowing she was in the mad crush of preparing for her dissertation defense, I didn't have high hopes that she would have time to share the knowledge, but on the other hand, it isn't every day that the illustrious antarcticiana offers outsiders the one-way ticket to fame and glory represented by a guest post in these pages. Within hours the hot copy was on my screen: 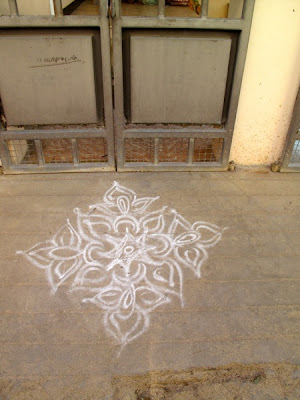 You've taken pictures of just the very things that sent me down the road of this crazy dissertation I just completed. They are all apotropaic in the sense that they attract auspiciousness (in the case of the kolams or rice flour designs drawn on the ground), or they repel inauspiciousness (in the case of the other items you photographed which are evil eye or drishti amulets). The threshold of the home (or business), as a liminal space, is the most vulnerable to evil influences and energies. So, as you have no doubt noticed, it is at the entrance to homes and businesses that you find the greatest concentration of such evil-eye repellent forms.
The rice-flour designs on the ground are called kolam in Tamil and are drawn only by women and girls, usually at the crack of dawn. These types of patterns have mathematical properties that computer programmers are actually quite interested in. They can get very complicated and are drawn freehand by women. These skills are passed down from mothers to daughters. Kolams are a sign that everything in the home is well. They invite auspiciousness into the home, and especially the goddess of prosperity: Lakshmi. They are ephemeral art forms, akin to sand mandalas. They are meant to be trampled and dispersed, and it looks like you have a pic of one in just this state. 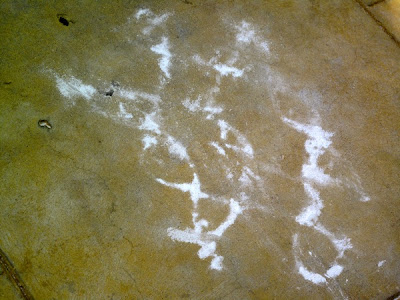 The two Kolams above and below were photographed on the same threshhold, one in front of each of two metal gates giving access to the courtyard. They appear to have matched before one of them was mussed by pedestrians. 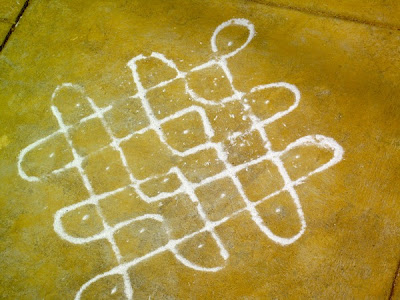 Some people say that putting out a kolam is like feeding a thousand souls, because ants take away the rice flour and eat it. Kolams, with their lines that have no beginning and no end, are understood to confuse evil spirits, who are baffled by them. 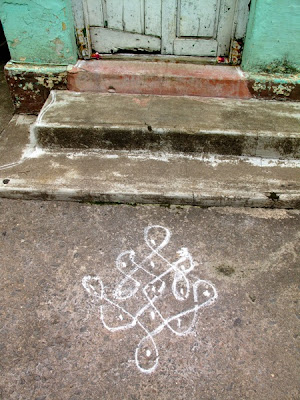 The famous anthropologist Alfred Gell called such designs (like kolams and Celtic knots) "demonic fly-paper" for their ability to "trap" and distract the attentions of wayward spirits. (A great video on kolams can be found here.) 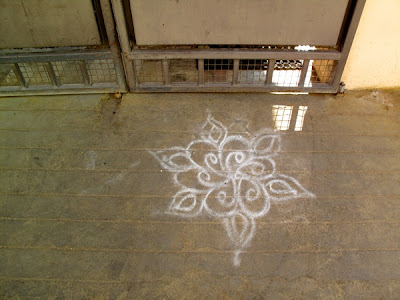 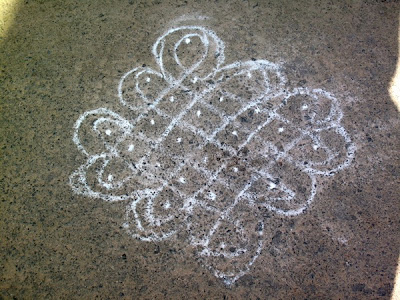 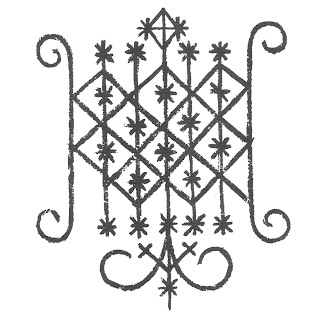 An interesting aside: Above and below are veve, ritual drawings of Haitian vodou, which, coincidentally or not, share a number of attributes with kolam. Both are "drawn" on the ground by carefully allowing a trail of flour or meal to escape from between the thumb and forefinger. Both invoke the supernatural. Both are ephemeral artworks which may begin to be dispersed almost as soon as they are finished. "The veve is not a permanent record," wrote Harold Courlander. "It is made as an act of supplication or veneration, and once it is finished it has no further value. In the ensuing ritual and dance, the veve is obliterated by the feet that pass across it."*

And, from Alfred Métraux: "These emblematic drawings have a magical nature. Merely by tracing them out a priest puts pressure on the loa [spirits] and compels them to appear.... (T)he loa will be irresistibly attracted by the magic of the veve...."** 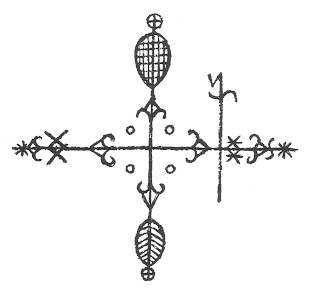 Veve for Legba, perceived as the guardian of portals and doorways--the "liminal space" and threshold of the spirit world. Also taken from Divine Horsemen. 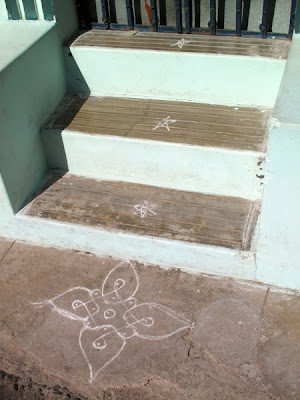 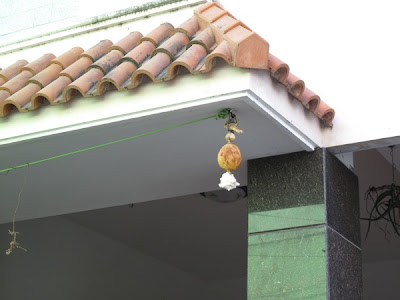 Your pic of the amulet dangling down is a classic "evil eye" or drishti amulet. It consists of a rope of human hair (grotesque and chosen for just this reason!) which holds a conch shell, a palm fruit (?) wrapped in yellow, turmeric smeared cotton string, and a chunk of alum. Alum in particular has interesting evil eye repellent properties. When you burn it, it pops and makes a lot of loud noises which are said to be evidence of drishti. This combination of the hair rope with the conch shell, etc., is quite popular. 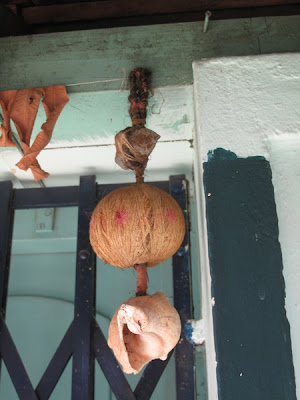 Finally, you've got a very nice pic of an evil eye-repellent coconut demon head! Demon heads are made from papier-mache, they are painted on pumpkins, and they are also-somewhat more rarely-painted on dried out coconuts. These demons (called butam in Tamil) usually have horns, big mustaches, and a tongue sticking out with a scorpion on it. Such scary and ugly amulets are supposed to draw the attentions of onlookers (and potential evil eye casters) who will then be frightened or disgusted by the amulet and look away--their evil eye averted. This one appears to be hanging outside a shop. Places of business are protected from evil eye just like homes. 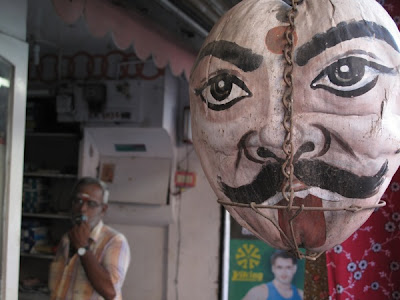 The shopkeeper of the store adjacent to this spectacular coconut-head saw me photographing it, and I struck up a conversation with him that went something like this:

Me: What on earth is that?

Shopkeeper: We have a strong belief here, that if you have something very beautiful, someone can come and admire that thing, and somehow take something away from it. We call it drishti. That coconut relates to that.

S: Yes. perhaps damage it, in some way. And our ancestors, you know, they were not such fools as we may think, so there may be something in that. To prevent it, you must hang something hideous, something ugly there. To guard against that.

M: But I rather like the coconut. What I'm enviously admiring is the very amulet that is supposed to repel me. Story of my life.

(All italicized text courtesy of Melanie Dean, to whom I am extraordinarily grateful for this erudite and illuminating contribution. Best wishes to her on the eve of her doctoral dissertation defense. She cannot but emerge diplomaed and victorious even if she brings to it only a fraction of the clarity and concision demonstrated in this post.)

love the title of this entry. very honored to make a guest appearance in your blog, and I look forward to talking you about all these things when I see you in person in Princeton!