After tearful hugs goodbye I bid adieu to Anne and Sylvestre yesterday, hopped in my rented Toyota Corolla and tried to keep left on the winding coastal highway north from Christchurch to Kaikoura, stopping to investigate the braided shingle riverbeds of northern Canterbury for a few of the birds that specialize in this niche habitat. Black fronted tern and Banded Dotterel, both endemic to New Zealand, were easy to find, as was Southern Pied Oystercatcher. Wrybill, a small wading bird unique in the avian world for having an asymmetrical bill, remained elusive. I'll have to try for that on the road south. Bored yet? 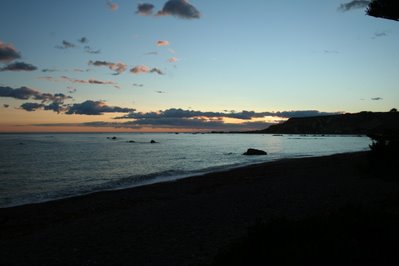 Kaikoura is an oceanic nature-lover's paradise, because here the offshore underwater topography is remarkable. Perhaps nowhere else in the world does the edge of the continental shelf butt up so close against the land. As all enthusiasts of marine wildlife know, the transition zone where the deep waters beyond the shelf collide and intermingle with shallows of the coastal slope, is immensely rich. With fish and krill and shrimps and what have you. All around the world this zone of the ocean is where pelagic sea-going birds concentrate. In New York the continental shelf lies offshore about 80 miles to the east, which is why albatrosses and their smaller cousins are never seen in New York harbor. But at Kaikoura the shelf shelves off just one mile from the New Zealand shore. That's why I came here. A fifteen minute ride in a small powerboat gets you to the land of whales, dolphins and seabirds galore. 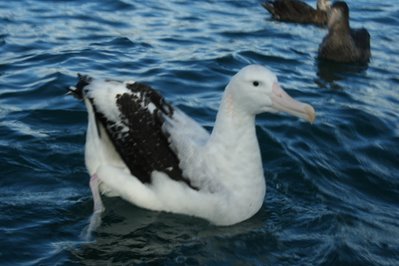 The Wandering Albatross has an ass as big as a swan and can travel hundreds and even possibly thousands of miles in a day on the wings that are folded in this picture.

At six this morning, seven of us eager amateur naturalists, already clutching our binoculars with fevered anticipation, piled into a minivan for the short ride around to Kaikoura's south bay, where we boarded a twin outboard cruiser. With me on board was a hardcore British twitcher on his last day of an intensive all-birds three week trip around New Zealand, with nothing left to see. He was only looking for one species to add to his list, Buller's Shearwater, a blue-gray gull-sized seabird that swoops and soars over the open Pacific. A German couple, wearing identical, matching blue and red anoraks, the way middle-aged German couples always seem to, had telephoto lenses and video cameras at the ready, but didn't seem particularly birdy. Three young dutch ornithologists rounded out the party. They began oohing and aahing with pleasure just minutes after we launched, when the first massive Wandering Albatross wheeled by to check us out. These birds have the broadest wingspan of any species on earth--wingtip to wingtip on an average adult bird measures between nine and ten feet. That is more than a third of our boat's length. They are quite literally awesome. A moment later before we were anywhere that could be considered out of the harbor, a Buller's Shearwater zipped past. "That's it then, I can go home now," said the Brit. "Lovely."

Five minutes later Alistair, our captain, came back to the stern to release some chum, a frozen block of fish offal in a mesh bag that we proceeded to trail a few feet behind the boat. In seconds the massive Wanderers swept in to land like glider-sized gulls, settling onto the surface of the sea four or five feet away from us in the churning wake. More than a dozen Northern Giant Petrels, almost as big, but grotty and ungainly, the hunchback of Notre Dame of seabirds, flew in to join them. Then came a handful of Salvin's Albatrosses. A New Zealand White Capped Albatross, which may or may not be a separate species from the Salvin's, came in to join the aggressive maelstrom of mammoth-beaked gigantor birds pecking mercilessly at the chunk of fish guts bobbing behind us. At times the plunging assault of dozens of seabirds coming in to investigate us filled the sky until we resembled Tippi Hedren under attack, except that most of the birds arriving to visit us had wingspans the length of my rental car. It was a truly amazing spectacle of which I took some spectacularly mediocre photographs. That this was all happening not only within sight of land, but with miles and miles of New Zealand's splendid mountains stretched out above the beach behind us, was truly mind-blowing. 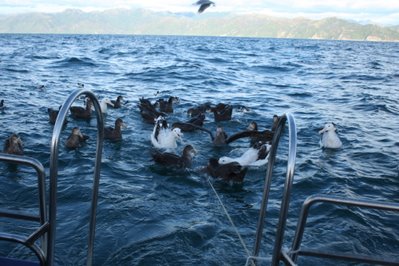 
Off our bows, a sperm-whale tooted and sprayed, blasting its misty breath into the air before it breached. Westland and White Chinned Petrels appeared, and a multitude of Cape Pigeons. I know it's terribly tedious to read about, but this is the sort of thing I do for fun. Suddenly, amidst the gaggle of snapping Northern Giant Petrels appeared a Southern Giant Petrel, identical in all respects except that the curved nail at the tip of its bill is tinged greenish-yellow rather than reddish-yellow as on the nail of the Northern. I'm not kidding. Telling these two birds apart, in flight, at more than about ten feet, would be essentially impossible, but luckily ours were swimming around our bag of stink in a froth of feeding, so close to the boat that I could barely focus the binoculars on them. It was a great morning. 2590, if you know what I mean. 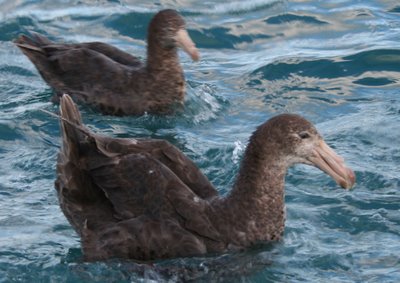 See the muddy-reddish tinge to the bill tip? 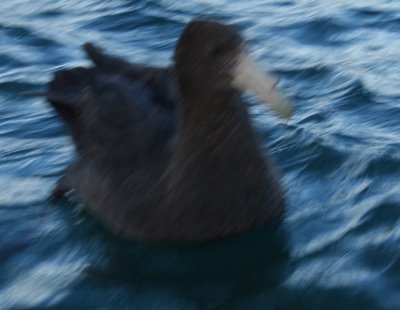 Stunningly blurry Southern Giant Petrel. Note the green tint to the nail at the tip of the bill. Or just take my word for it.

Hey man. I have a new title idea: "Confessions of a Crazy Bearded Man." Does it work? You'd just never be able to shave again. Today, by the way, was the judging of McMurdo's beard growing contest. I think that you would have won, for sure. Thanks for the good photos on your site, and I got the patches...MERCI, mon ami.