I don't have time to do justice to our fabulous final jaunt here in Antarctica; we have been scrambling for days to get out of McMurdo. Packing cameras for cargo flight, boxing up videotapes, doing laundry, returning mountains of camping gear and uneaten granola bars, and trying to prepare psychologically for our departure tomorrow have left little time to write about Cape Royds. The best I can manage at the moment is a photo essay. 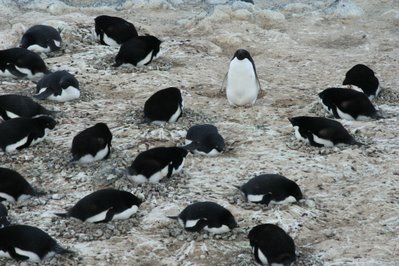 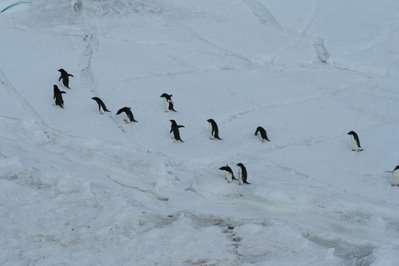 How deep is that crevasse, do you think? 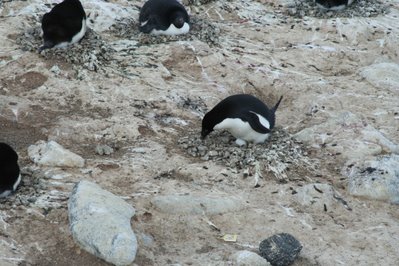 Allan Ashworth, Kelly Gorz, Andrew Podoll and Anne, Sylvestre and I flew out to Cape Royds on Monday to film the geology party on a day of R and R, visiting Ernest Shackleton's hut there. Shackleton and his men set up camp in the midst of an Adelie penguin colony, thereby assuring themselves a plentiful blubber hunt. The colony still thrives, despite those depredations. Before we began filming we walked up to view the penguins and have a look around, and in the meanwhile another film crew arrived. If you are expecting Brad Pitt to show up at the opening of his latest movie in New York it is not surprise to find a bunch of other camera crews on the scene, but it was rather a shock to come upon the competition in the wilds of Antarctica. They had arrived from the Kiwi's Scott Base, in a Hagglunds, a vehicle rather like a Pisten Bully dragging a passenger car, which has the advantage of floating if it falls through the ice. I approached the sound man, here pictured on the right, just behind the camera. "Fantastic," I said. "Amazing; the only other soundman in all of Antarctica! Fancy us meeting this way." To which he had absolutely nothing to say. Not the merest chuckle. A couple of Germans so humorless as to have apparently gotten on board the Hagglunds at central casting. 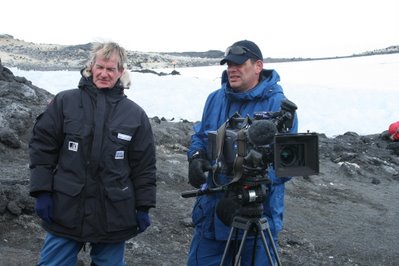 Excuse me, we were here first. Please wait your turn behind the other film crews. 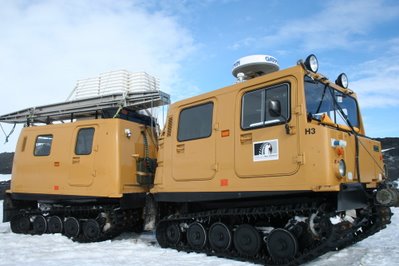 The Kiwi Hagglunds from: Vehicles of McMurdo 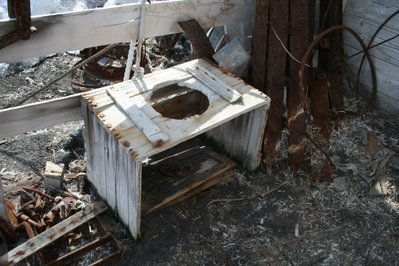 Ernest Shackleton's Thunder box. The hut itself is filled with a display of forgotten Byrd's Custard, Tate and Lyle's Golden Syrup, mildewed socks and a massive coal burning oven that must have kept the place quite toasty. (The images in my last post are from Scott's hut at Cape Evans, which we also visited, later in the day).

I want to sincerely apologize for the sullen behaviour of my fellow countrymen. But hey, remember that bartender on 3rd Avenue who told a bunch of racist jokes and then turned to me, saying: 'You know why there's no German jokes? Because there's nothin funny about those people."

Sorry to diss the fatherland, my man, but I tell it like it is. I was going to call this post "Constipated in Cologne," but I thought that was a bit much for the front page...

You just might have been one of three sound guys down here. Although I guess Werner doesn't count as a "sound guy" per se, he was doing sound for his shoots.

Glad you made it north. Say hi to the rotating-face fountain at the botanical gardens.

Hey Mechanical
Good point about Werner. I tried the same cameraderie-building joke on him "oh, hi, nice to meet you, I'm the other sound guy in Antarctica...." He was less uptight but still didn't quite catch it, he said "Oh, but I am doing sound on my own film..." If you look on IMDB he has exactly one other sound credit, from 1962.... Good to hear from you.