Think before you eat

The extensive reef protecting the Belizean coastline from the surging waters of the Caribbean is, after Australia's Great Barrier Reef, the longest coral reef in the world. In comparison with most of the rest of the reefs of the Caribbean, it is healthy and well preserved. But to anyone who had the privilege of seeing it thirty or forty years ago, it looks like a gray, gloomy and algae-clogged graveyard populated only by a remnant population of small and insignificant fish. 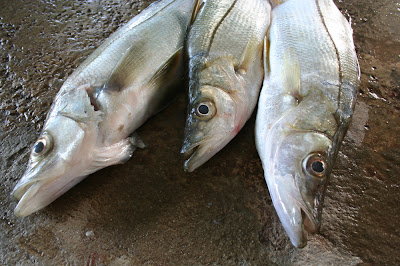 From the deck of our chartered luxury catamaran, bobbing gently on a mooring off of the Silk Cayes, the view of the pristine sea suggests paradise. Tiny islands just big enough to house a handful of coconut palms are scattered in turquoise seas that glint under clear cerulean skies. They are almost a parody of a "deserted island" of the sort that always seems to crop up in New Yorker cartoons, a ring of sparkling white sand encircling a dot of land the size of a suburban backyard, with a few pelicans roosting in the lone, or almost lone, palm tree. 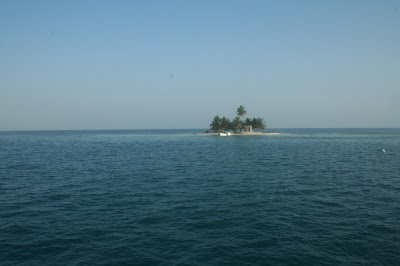 If you were stuck on this why on earth would you want anyone to rescue you?

We are making a "fun show for kids" about how badly we have screwed up the earth which they are going to inherit. Television like this is a rather unique challenge, since gloom and doom must always somehow be counterbalanced with excitement and adventure. If not, our ten-year-old demographic seems unlikely to want to watch, and the message, that they will have to do better than we did, will not be conveyed. This is proving difficult today, as our seventeen and eighteen-year-old hosts interview Richard Foster, a veteran nature photographer and diver who has lived in Belize for almost thirty years. 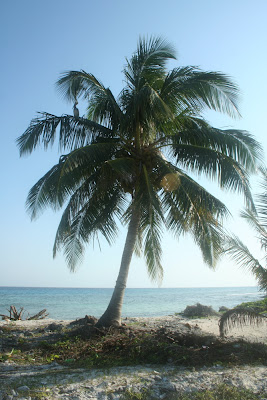 We head out with Foster in an open boat, leaving the sheltered waters inside the reef on the fifteen-minute ride out to a known Nassau Grouper spawning ground. As soon as we have shot through a gap in the wall of coral-heads we find ourselves in very different seas. There are no white crests on the waves of this much deeper blue water, but the distance between crest and trough of the swells is at least eight to ten feet, enough to assure me of the boat's piddly impotence. From here neither land nor caye is visible. Two of the eco-team are diving with Foster to look for grouper, which used to spawn here, he tells us, by the hundreds of thousands. "Today we will be lucky if we find fifteen," he says. "They have literally been fished right to the very edge of extinction, not just here, but all throughout the Caribbean." 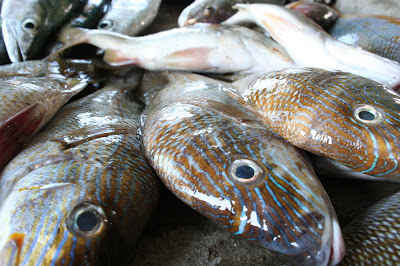 After filming the divers splashing back first into the sea, cameraman Will Edwards and I sit with the boat captain and follow the chains of bubbles where they murmur on the surface. A Hawksbill turtle a good four or five feet long peers at us from the nearby crest of a swell, before diving back down into the depths. The boat goes up, rocks sideways, slides back down into the next trough, rolls the other way, rises gently up again. The horizon is wavy with swell. Proud to have survived the Wollongong pelagic in the notorious waters of the Tasman Sea with my breakfast intact, I am suddenly feeling rather shirty. "Hey Will," I say, gripping the padded rail of the dive boat for some sort of reassurance, "how you feeling?" "Deteriorating," says Will, summing up the seasickness experience in one word. There is nothing to be done but focus on taming the nausea. It is a horrible uncontrollable feeling of sliding into misery, until one wishes for death. Will tells me he once threw up on a sound recordist as he rushed towards the rail to be ill. I ponder our relative positions in hopes this might distract me from my predicament. Perhaps I will manage to upchuck on him first, redeeming the sound recordist brotherhood. But there is no distraction from the dread mal de mer. As all roads lead to Rome so do all thoughts veer quickly back into a single-minded focus on one's churning stomach acids, which threaten to emerge into the freedom of the great wild world at any instant. "Deh some fish back deya waiting fe eat dat," says our captain, encouragingly. I'm glad to hear it won't go to waste. By the time the divers reemerge from their blissful voyage ninety feet below the surface, the two of us are green around the proverbial gills. Their dawdling and unbuckling of weight belts and unslinging of oxygen tanks and removing of flippers and staggered climbing of the swim-ladder seems to take an interminable aeon, while all the while the puke potentiometer needle is flickering ominously in the red zone. Moments later, zipping through the gap, twenty knots of boat speed making a wind in our face, the sea again placid inside the reef, the feeling recedes as quickly as it had come on. Breakfast preserved, but only just. 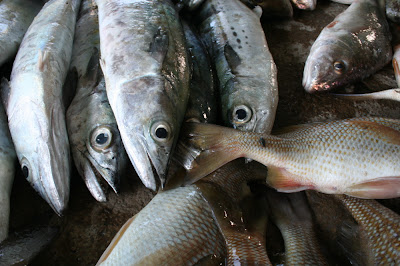 Snorkeling from our catamaran between takes the glorious vista above the waterline becomes gloomier. The Silk Cayes and the nearby Laughingbird Caye are some of the better-managed and protected reef areas in Belize, and still some eighty-percent of the corals are dead gray sandy lumps. Foster is one of those lucky people who saw these reefs when they were in pristine condition. When he first arrived here, he says, the area was clotted with corals fighting one another for space in one luxuriant and thriving underwater garden after another. Today fish still abound, but all are much smaller than they should be. The reefs have been subjected to a multi-pronged attack. Global warming has bleached and killed all but the heartiest examples of coral. According to Foster this happened in the late 1980s, when rising water temperatures turned almost all the coral here into a lifeless white desert down as far as fifty feet below sea level. Gill net fishing has decimated the reef-fish population. These nets trap fish indiscriminately, based on the size of their aperture. Gill net mesh must be three and half or four inches square in Belizean waters, but nets of this size may still be used legally, although they rip corals from the sand, kill many fish which are unwanted by the market, and unless promptly checked and collected, result in many spoiled catches. The effort to entirely ban gill nets has been stymied by corrupt politicians who trade fishing licenses for portions of the catch. As the supplies of good food fish have declined (our divers saw not one single Nassau Grouper on what once was their massive annual communal spawning ground) fishermen have turned to less tasty species that once were not fished, like parrotfish. But these fish are critical to the reef eco-system because they clean the algae from the coral surfaces, allowing the corals to breathe and thrive. It is, like so many environmental crises, a downward circling spiral. Swimming around Laughingbird Caye I add to my fish list (yes, I have a fish list). I spot two species of butterflyfishes, a variety of parrotfishes, a nurse shark about my size, and many, many, many enormous Barracuda. Although these are "unlikely to attack humans unless provoked," it is most unnerving to snorkle past groups of these fearless and curious omnivores, with their massive tubular bodies and vicious teeth. Some I see are a good four feet long, and the diameter of my thigh. 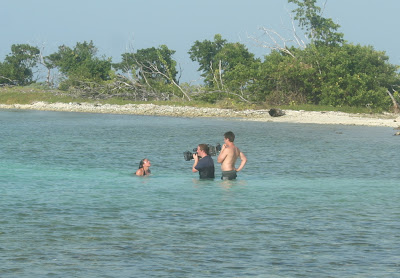 Will "Pigpen" Edwards wades into snorkle territory to film eco-team member Kai Hinson emerging from the Barracuda-infested depths. This kind of "beauty shot" is filmed "MOS," film slang allegedly derived from the bogus German "mit out sound," or as Will, a brit, says, "mute," meaning that instead of working the shot I am free to stroll on the beach and take absurd candid shots of my co-workers.

The Barracuda, Foster explains, are thriving, one of the few beneficiaries of unsustainable fishing techniques. Because of their power and nasty teeth they are not trapped in the gill nets. When they swim into one they are able to rip their way free of the monofilament, which looks something like a wall made out of volleyball netting. Since the other large predators, primarily various species of sharks, have been fished almost to extinction, this leaves the barracuda the only bullies at the top of the food chain. If anything, they are suffering from overpopulation, to the extent that they are now having a damaging impact on the sportfishing industry. One boat captain, Foster told me, was complaining that when his fishing clients catch a Permit, a prized game fish, they are now lucky to land their trophy without its having been ripped apart by Barracuda as they are reeling it in. 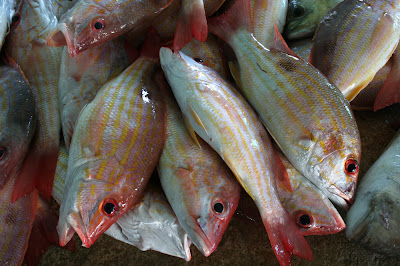 It is hard to be optimistic about this situation. Most tourists are happy with the white sand and the views of the sparkling Caribbean sea visible from the deck of a boat. Many of those who dive overboard do not even recognize that they are looking at a graveyard of coral, as there are now so few places left where any perfect habitat can be observed. All of us have enjoyed delicious fish dishes in the waterfront restaurants here in Punta Gorda. But Foster says he no longer eats fish here. "I can't bring myself to do it," he says. Next time you are in a restaurant considering the fish special consider wondering, at the very least, what country it might have been fished in, and by what means it might have been caught. As Richard Foster said at one point in our filming, "we stopped hunting on land a long time ago, and began farming. Isn't it time we stopped hunting in the sea, as well?"

Got a great book for you on kids and the environment: "Last child left in the woods: Saving Our Children from Nature Deficit Disorder," by Richard LOUV, who points to studies which show kids who play outside at recess in leafy and unstructured environments learn and test better than those same kids on blacktop at recess.

Handsome bookshelf you got there, too.
The Annual Giving Volunteer website
http://www.princeton.edu/giving/ag/agdon/AGVol_Index.html
Best,
ned

Merciless. The check is in the mail.