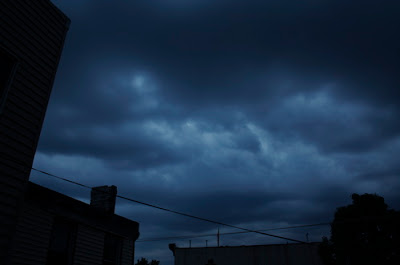 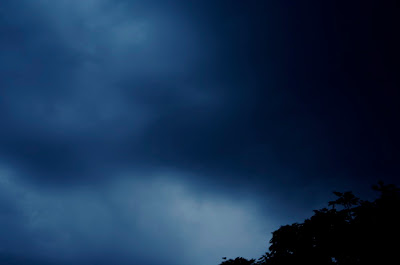 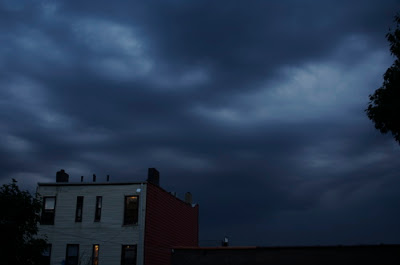 The Pacific navigators of yore leaned out of their proas and observed the angle of the chop of the waves before glancing at the distant horizon to read there a comprehensive meteorological report. Millennia ago, our species could smell as well as many others; alert heads turned at the distant wafted whiff of a predator; our ears pricked up at the scent of potential prey. Today, although in many ways alleged to be more advanced, we have lost those skills. Therefore, I may be wrong when I say that this summer, the sky over Brooklyn has a new and troubling aspect, an ominous look never before seen in these latitudes. There is an inexorable, rolling, bruised eggplant character to clouds that bring waves of rain, falling in sheets before passing quickly on, leaving a churning purple mass to reconstitute itself in the sky. Evening after evening a narrow slit of sulphurous yellow lies to the west, behind the Statue of Liberty, crushed under thick, gray, swirling cotton fit to burst, the sorts of clouds that in all my many travels have always served to announce and reinforce an arrival in the tropics. Here in Brooklyn we have, suddenly, heavy, wet, oppressive skies straight out of the Guatemalan rainy season, weather that one might expect to seeing gathering on the Amazonian horizon or lurking behind an Indonesian island in a Joseph Conrad novel. It is something alien, a Philippine typhoon gathering above New York harbor.

In other news, it is 105 degrees plus in southern Romania, as if it were August in the Sahara.

These things are not normal. 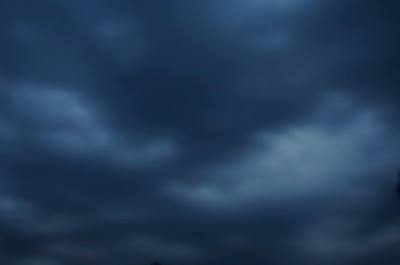 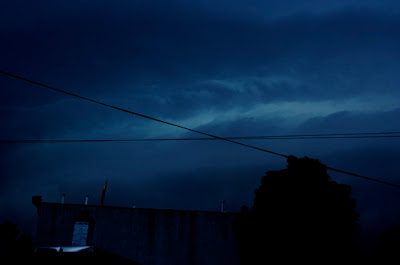 This indeed looks like something Roland Emmerich came up with. Well, it's been eternal spring in Bavaria since about February. Never mind the storms leaving behind a corridor of destruction in the rest of Germany. There's an old-fashioned proverb in German, which describes people who don't give a fuck: 'After me - The Flood'

I refuse to believe that "Apres moi, le deluge" originated in the fatherland. Methinks you may be unwittingly translating from the Franche.