The Rebar Chairs of Cuba 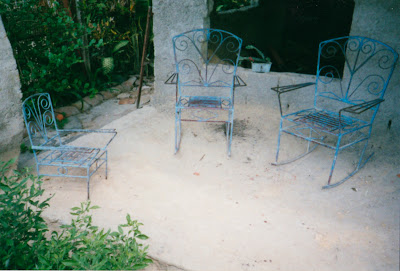 Between polishing my new wood floor and reinstalling my kitchen, I've been spending some time lately going through stacks of photographs taken a number of years ago on my epic journey across Cuba on foot. (If you are new to this blog and work for the State Department or the Department of the Treasury, now is the time for me to tell you that everything written here is a meticulous fiction, no matter how much it may appear to be essentially documentary in nature....) This journey may or may not have happened in what I would refer to as Cuba's "late Special Period," meaning well after the demise of the Supreme Soviet. The collapse of the USSR brought many hardships to Cuba; soap, for instance, was in 1994 and 1995 almost impossible to obtain anywhere on the island, and at that time Cubans washed as best they could with limes. 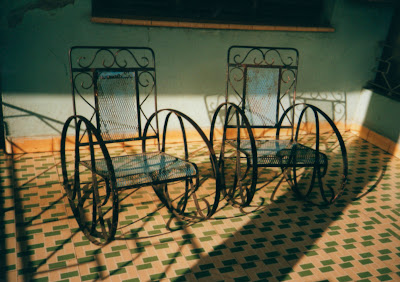 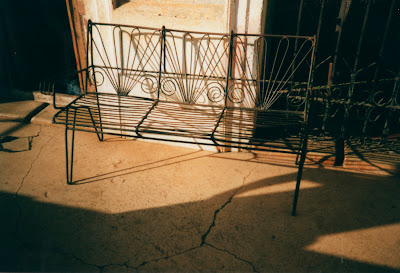 It seems unlikely that the Soviets were ever particularly adept at producing and exporting patio furniture; certainly what little industry there had been in this area had long since ceased by the dawning of the new millennium, when I might have set out to walk the length of the island. One hears much about the ingenuity of the Cubans in that time of hardship and scarcity, and as a result wherever I might have went I found no lack of outdoor seating. 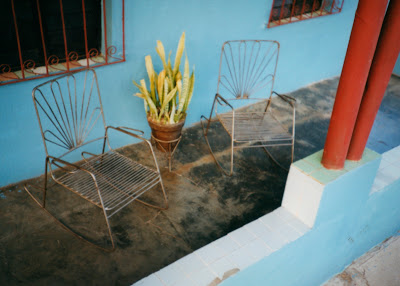 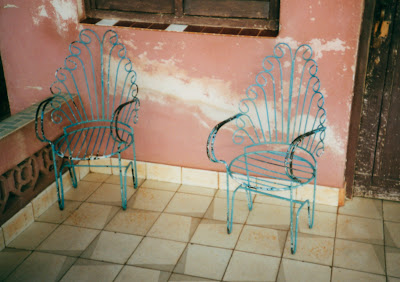 To cope with the difficulties of having a seat on the front porch in a time when there was no seating, the Cubans elevated the lowly rebar, that humble pig-iron rod used in vast quantities for concrete reinforcement, to the status of a primary construction material. The result, with some deft bending and welding, was a plethora of indestructible outdoor furniture. Found the length and breadth of the country, in styles ranging from the bauhaus knockoff to the positively baroque, the rebar chair became for me a testimony to the resilience of the Cuban peoples, and a signifier of their desire to sit down and relax. 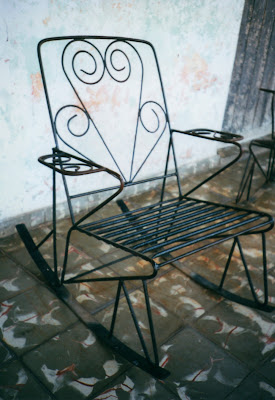 Since then I have become a big fan of rebar, which crops up again and again in the so-called third world, that mass of impoverished countries of which Fidel Castro has so often been pleased to consider himself the philosophical leader. My potrack is made of rebar, welded into a configuration copied from the window-guards of mud houses in Rwanda. The spindles supporting my banister, my friend Joseph informed me while graciously lending me the use of his shop to machine them, are "the only drilled and tapped lengths of rebar in the history of mankind." I have a chisel made of rebar, found in a coastal hardware store in Brazil. Some might say that I have seized on using the material as an ongoing design theme throughout my abode only because I am a cheap bastard, but I prefer to date my interest back to the ingenious, bespoke, chairs of Cuba. 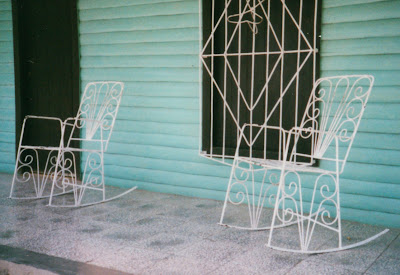 Upon rereading this post I find it suggests that the rebar chairs were a product of the scarcity of the "special period," generally thought to represent much of the 1990s, but I'm not sure that is true; I suspect many of these chairs are from the Soviet era, when rebar was abundant, but patio furniture wasn't.