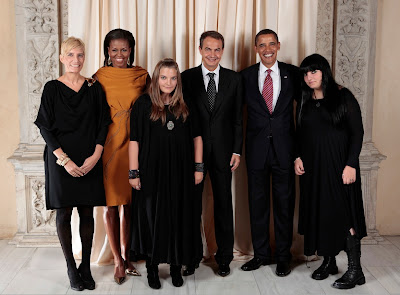 This picture of the Obamas with the first family of Spain has been all over the interwebs. In the darkest corners of the web it is even fueling the assertion that our president is the antichrist, devil-spawn who consorts with demons and devils. (Not to start a new rumor, but I heard the state department suppressed some of the pictures from later on this roll, when this happy group was captured actually stirring a cauldron).

But after my bashing of goth culture about a month ago all such photographs have become vaguely relevant, which of course is all we really need to get us going over here at antarcticiana. Looking at this image, I now regret my cruel dismissal of the black-clothed army of teenagers who favor maroon eyeliner and combat boots. Simultaneously hunchbacked, bashful, excruciatingly awkward, and 100% goth, the Zapatero daughters make adorable poster-children for teen angst. One just wants to give them a big hug and tell them that it is all going to be okay, that it would only take a couple of yoga classes, a popsickle, and a pair of comfortable sneakers to make everything right with the world.