The first of a couple, or a few, installments of the chronicle of an ongoing sail from Cape Cod to New York...

The ferry east from Boston to Provincetown today crosses a calm and silvery sea. On the PA system the ship's concierge announces ideal conditions for the crossing, "not like the past couple of days." He means that it is calm and windless. The hapless sailboats we pass in the harbor have given up their hopes for an exciting labor day sail, and they motor, with bare poles. This is as might be expected, since I am en route to meet Captain Anthony Chase and sail his boat, Salomé, back to New York City with him. My visits to that vessel have with extraordinary frequency been plagued by calm. Anthony and I have spent many afternoons together in Long Island Sound staring at a slack sail in dismay and watching bits of seaweed drift beside us, keeping pace as we bob, wakeless, praying for wind. I'm surprised still to be invited along, so consistently have I brought this sailor's curse along with me. Anthony and I both hate to start the engines, but we are usually forced to when the longed for late afternoon breeze invariably fails to materialize. The sheet of glass that is this morning's Bay of Massachusetts, and the immobile cottony balls of cloud pasted against the sky suggest that this trip will be no different. 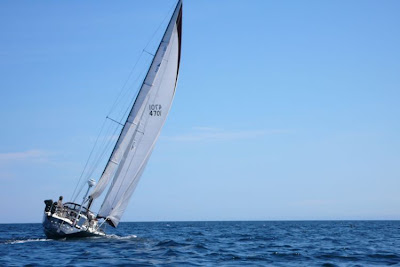 Salomé on a windy day, on the outbound journey. I was not on board.

Evan and Ant pick me up in Provincetown for the drive down the Cape to Wellfleet, where Salomé sits on a mooring. They made the trip north last week, during which Anthony left me not one but two breathless messages of the "you don't know what you are missing" variety, describing deliciously favorable and constant winds, resulting in entire days spent scooting along on a "broad reach" without even the dimmest memory of even having an engine to turn to ever intruding into their delighted minds.

On board we optimistically remove the sail covers and then fire up the motor. Ostensibly this is to help us navigate the counter-intuitive zig-zag channel out of Wellfleet Harbor, but one glance at the pancake sea and I have no doubt that we will be burning fuel all afternoon. Anthony calls his wife, Nini, who does the majority of the landlubbing in the marriage. "Well," he says, "to be honest, we're motoring." He graciously avoids blaming this unhappy state of affairs on me. "Loooooosers...," replies Nini, and I picture her sitting in the country kitchen of her Catskills farmhouse, gleefully making the "L" sign with thumb and forefinger, and holding it up to her forehead. The afternoon is calm as we diesel across the placid pond of the Bay of Massachusetts. The water is flat. How flat? The stunningly round tomato I will soon chop into the the codfish ceviche rests solidly on the cockpit table, tremorless.

Yesterday ended with a long, slow slog through the Cape Cod canal, which connects the Bay of Massachusetts with Buzzard's Bay and points south, saving mariners the danger and distance of going all the way around the outside of Cape Cod over treacherous and shifting banks. Arriving at the canal's northern mouth just at slack tide, we opted to press through and find a harbor for the night. It is an impressive feat of labor intensive engineering, but the canal also serves as a pressure valve of sorts for the tides flooding in and out of Buzzard's Bay. Soon we were motoring against the flood, four knots of current charging straight at us down the narrow channel. We slowed to a crawl.

The sun went down, and it was dusk. The pedestrians out for an evening constitutional on the canal towpaths at first kept pace with us, and then began to overtake us. Not a few glanced over at us in puzzlement, perhaps wondering why we were sitting still in an active shipping channel. Then it got dark, and they could no longer see us.

Finally through, we found a mooring at Onset harbor. We enjoyed ceviche, and miso-marinated grilled cod, enjoying the culinary aspect of the sailing lifestyle, even if we had yet to do any actual sailing. In the morning a dead calm, much like the day before. Rather than subject you to more of the same, here is a short poem I've written to sum up the continuation of our journey:

Stretched out beneath the leaden skies

Limply from the poles

Drowned out by the steady throb

Our excitement at finally watching the sails fill with wind yesterday afternoon--a lazy five to ten knot breeze that gave us just enough of a torpid push to justify turning off the engine--was tempered with anxiety at the weather forecast. Since we were barely moving along through the gentle ripples on the surface, the prospect that today would see fifteen to twenty knot winds, gusting up to thirty, five foot seas, and a "small craft advisory," seemed unlikely, almost absurd, but the sailor who ignores the weather forecast is a fool, and we headed into Newport to sit it out. It is sunny and breezy. No boats are moving in and out of the harbor, and the advertised gusts have us rolling and swinging in the mooring field. There is little to do but organize the tool boxes, eat granola and imagine that outside the harbor it would be just about sailable, but risky, the kind of conditions in which a minor mishap or problem might easily spiral out of control. The wind whistles through the rigging, and the sound of slapping halyards on boats moored upwind carries far over the water. I fantasize about being out at sea, and wonder when it will be time for the next snack. 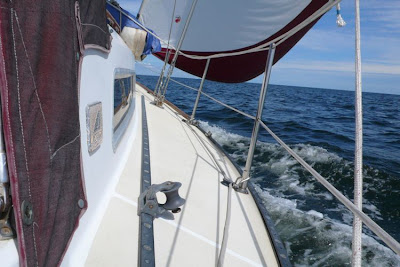 A breezy day on board Salomé, when I wasn't there.
Photos: Evan Eames

"... Cape Cod girls they have no combs, they comb their hair with codfish bones!"