Reading: Long After Midnight at the El Niño Bien by Brian Winter 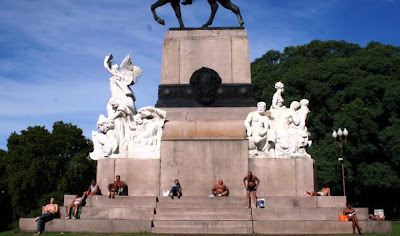 For some time now the idea has been swirling around in my brain that Argentina is a country poorly served by the travel literature. There are of course the usual plethora of Lonely Planet guides influencing the movements of gringo visitors through the country. That's not what I'm referring to. Such books have become tired caricatures of themselves, and lately I have more than once caught myself using them for guidance on precisely where not to go, in hopes of avoiding the backpacker hordes. No, what I mean is that I've been searching in vain for a travelogue that lays bare the soul of the vast Argentine nation. After all, Chile, a much smaller and narrower strip of land to the west of the Andes, has one in Sarah Wheeler's excellent Travels in a Thin Country.

Tales of Argentina do fill most of In Patagonia, indubitably one of the towering skyscrapers of the genre, but Bruce Chatwin's account

rarely ranges farther afield than the boggy wastelands of the remote deep south. It is no more a book about Argentina than an account of frontier life in Alaska could encapsulate life in the United States. What's more, as I've already pointed out, there are scarcely any Argentines to be found between its covers.

I'm still looking, even if Brian Winter makes a gaucho's stab in the right direction with his Long After Midnight at the El Niño Bien.

This account of learning to dance the tango in the wee hours of the morning is resolutely focused on Buenos Aires, a city that resembles New York in the sense that, as Winter says, it ought really to be a completely separate country from the rest of Argentina. Nonetheless, both the tango and gaucho culture are right up there with Malbec on the list of things most foreigners would identify as essentially Argentine, and Long After Midnight does a decent job with each. The book is less convincing at forging a link between the two. When he asks where the dance comes from, Winter stirs up an ancient, troublesome debate amongst the group of cronies he frequents in the milongas, as tango halls are known. He apparently sides with "El Dandy," who attributes the origins of the tango to the gauchos, but I say apparently only because the opposing theories are never outlined with comparable clarity. (Winter's posse, always happy to be stood a round by the young Reuters Argentina financial correspondent, are referred to throughout by nicknames like El Tigre, El Chino and El Griego, and for me none of them really emerged from behind these masks of anonymity to become individual characters.) 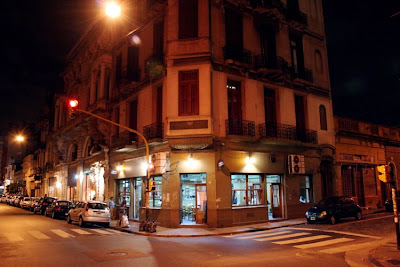 Winter makes a lot of jokes early in the book about learning to tango in order to meet women and relieve his lonely life in a distant city. He then falls in love with his tango teacher, something he cops to as a major cliché, but it is a savagely unrequited love affair that goes nowhere, and it ultimately feels a bit contrived, a convenient bit of plot paste to glue his milonga adventures together. There are lovely moments of self-deprecation here, however, as when Brian believes his foxy instructress has given him a unique whispered invitation to meet up after class for some serious partnering. Arriving at the dance he discovers only a table full of clumsy dweebs from every corner of the planet, a sort of kaffeeklatsch made up from the lovely Mariela's client list. It's my belief that making fun of oneself is the most effective route to humor in travel writing, and Winter comes up with some zingers. I particularly liked the opening to his epilogue: After I left Buenos Aires, I spent a year living in Mexico City, where I was the most grotesque creature imaginable--a Texan with an Argentine accent. I wore too many sweaters, I couldn't hold my tequila, I insisted on saying ciao instead of adios, and I had a strong urge to kiss everyone I met on the cheek, including men.

Winter dips into Argentine history, giving us Perón and populism, but he glances over the dictadura's more recent decades of horror, which he argues were less fertile ground for the tango. This is unfortunately akin to ignoring the holocaust in a consideration of the two Germanies, circa 1960. He argues that "the parallels between the fortunes of the tango and Argentine politics throughout history are truly striking," and goes on to say that the dark and melancholic tango "rose to prominence amid a time of prosperity almost unprecedented in the world; and then it nearly disappeared during the country's darkest hour." It is an elegant thought, but one which Winter promptly contradicts on the very next page, when he notes that between 2000 and 2004, "the worst years of the Argentine crisis...the number of milongas in Buenos Aires doubled." 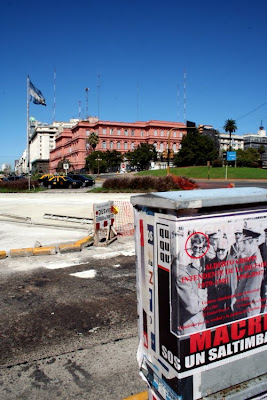 A poster in front of the Casa Rosada demands justice

It is cruel but irresistible to point out that Winter, the Reuters financial correspondent covering one of the largest economic meltdowns of all time (at least prior to the United States of the last two years), demonstrates his perfect qualifications for a subsequent job as deputy foreign editor at USA Today when he opts to abandon the "astonishing sight" of thousands of demonstrators banging on pots and pans at 4 o'clock in the morning in the grand plaza in front of Argentina's Casa Rosada, the pink white house. Caught up in history, he succumbs to peer pressure and rushes off with his milongüero cohorts to visit a whorehouse. 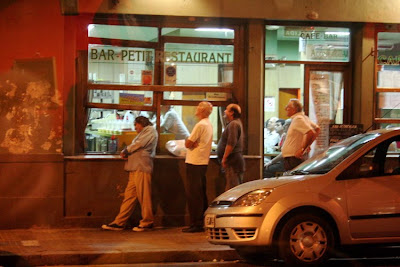 Demonstration? There's a football game on...

I sense stirrings of an imminent odyssey to somewhere in the west no, no, the south .. hmm, even an ocean passage!!

eek, how did that signature appear !! google is messing me up !!

Don't make the classic mistake, so common among many young whippersnappers like yourself, of thinking that the only good books must have been published in the last fifteen minutes. My words for you--following the word "Plastics" of course--are W. H. Hudson, The Purple Land . Try to get the edition (about 1915 or so) with an introduction by Teddy Roosevelt.

And don't you make the classic mistake, so common among many aged eminences like yourself, of forgetting that they have already recommended a particular dusty tome published more than one hundred years ago. My question for you--following the one "did you remember to take your multivitamins today?", of course--is: Aren't you the same Gladly Lerne, Gladly Teche who made the following comment last March after reading my post about Chatwin's "in Patagonia," linked above?

"Greetings from Paris! One good turn deserves another. I recommend W. H. Hudson's THE PURPLE LAND."

I bought it then in an edition bound in leather the color of a three-day old bruise. I admit I haven't read it yet, but I promise it is on the shelf with the rest of the Argentine non-fiction contenders. Even though it is a novel, set in Uruguay, I'm looking forward to it.

Plus the fact that Argentina, Paraguay, Uruguay--all social constructs, every one. Read your Foucault, fella.

Oh, now he wants me to read Foucault! Just when I had migrated "The Purple Land" to the bedside table!

You are a good sport, Mr. Winter, since I made a cheap joke about USA Today at your expense. I've never quite regretted it enough to edit it out, but of course that is largely because in this corner of blogville one doesn't really expect the author to come around and have a look. At least one didn't before the days of Google! Thank you for the reads, and by that I mean both the blog visit and your book.