I am occasionally asked if blogging isn't a distraction from more "worthy" writing projects, and I explain that the habit is a bit like the oil pump in a car. It keeps the writing muscles lubricated and active so that the engine is primed when it is time to produce some literary horsepower. I admit that it is sometimes a welcome distraction from other mundane tasks, doing the laundry, for instance. But rarely am I so busy with other writing that I had better not waste time blogging. 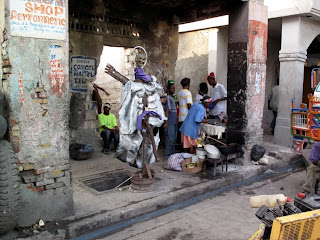 One of those times is now. I've just returned from an absurdly short trip to Haiti, organized at the last moment to cover the Ghetto Biennale, a unique cultural interchange between the sculptors of the Grand Rue, residents of a teeming Port au Prince slum, and an international coterie of visiting artists with a diverse array of site-specific projects. Almost all the visitors had their preconceptions immediately challenged, if not shattered, by their initial exposure to the difficult conditions and the level of poverty they encountered.

But because I will need to spend several days formulating my thoughts on the Biennale into numerous newspaper articles and at least one radio piece, I don't have time to tell you more about it here. Instead I would direct those of you frantic for your daily dose of travel musing to go and read my father's fascinating initial account of his recent trip to Israel.

To whet your appetite, here are a few of his delicious observations,

on food and its role in Jewish versus Christian community:

"An agnostic can have a fine time at a Shabbat meal; he is unlikely to go to High Mass for either the sociability or the gastronomy."

on the church at Bethlehem, in the West Bank:

"I didn’t have the sense of the money-changers actually having taken over the control of the temple as I did with some of the more familiar Christian sites in Jerusalem."

Many thanks for the boost, but do be sure not to neglect to let us know how we can read the article(s) that are causing you to shortchange your blog this week.

All details will be shared as soon as I have them, as the shameless self promotion of my own articles will likely serve in lieu of actual blog postings.

Interesting post you got here. I'd like to read more about that matter. Thanks for giving that info.
Sexy Lady
English escort

Dear Sexy Lady:
Wow, clearly this blog has arrived, somewhere! Women offering professional services of the most hallowed and ancient variety are advertising to my readers. A mark of some sort of distinction.... You will be able to read more, I hope, in the Times of London, as well as the Suddeustsche Zeitung, if you speak German, and should be able to listen to me giving a report on BBC radio 4 later this week. Assuming that your interest is sincere and not just more shameless exploitation of the epic marketing opportunity that antarcticiana's vast readership represents.