Live Blogging a Fabada Asturiana, by way of Gdansk

In Asturias, on the southern shores of the Bay of Biscay, grows a unique and enormous variety of bean. Known as Fabes de Granja, they are white, and plump, and curvaceous, rather like a cannellini bean in aspect, but not in scale. It takes four or five of your garden variety cannellini beans to match the volume and heft of a single one of its gigantesque Asturian cousins. I have never eaten Fabes de Granja, but I plan to.

A line traced along the famous camino, the ancient pilgrimage route leading from central France to Santiago de Compostela, maps also the world's greatest bean dishes. From this geoculinary perspective I have developed the tenuous hypothesis that a recipe involving the sublime combination of beans, slow stewed with smoky, fatty pork products, must have made its way through Europe, carried on the palates and the olfactory memories of the pilgrims. Midway between the cassoulet of Lyons and the white-bean feijoada of the Douro in northern Portugal sits the principality of Asturias, and its eponymous, princely, Fabada Asturiana.

A true Fabada cannot be made without Fabes, and they are not easy to obtain. Down van Brunt street at the Fairway I can buy salt from the Himalayas, onions from Vidalia County, Georgia, and tomatoes from San Marzano, outside Naples, but not Fabes de Granja. The sense of inner peace I get from cooking doesn't often involve the kind of planning ahead necessary to order beans online, so my first Fabada effort was to involve a series of compromises. And Fabes, when you can find them, go for ten to twenty dollars a pound. Dried. I wasn't sure I wanted to spend that kind of cake on some beans. 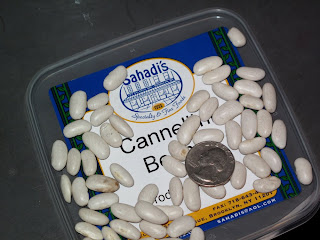 1200 hours
First a trip to Sahadi's for some classic made-in-the-USA Cannellini beans, and then on to Eagle Provisions, the Polish purveyors of all things porky. The critical non-bean ingredients in a Fabada are chorizo, morcilla, and bacon. I had some chorizo at home. The poles had a splendid slab of double-smoked bacon. "Any morcilla?" I asked. "Blood sausage?" The woman behind the counter pointed at a fat and rather scary tube of flesh in the bottom of the deli counter. It was a floppy pale gray, fully three inches in diameter, nothing like a dense, shiny eggplant-colored link of morcilla. "It's the polish one, kiszka. It's the same." Why not, I thought. It's made from blood, isn't it?

1400 hours
Poured boiling water over a pound of the dry beans to promote accelerated soaking. By 1600 they had tripled in size, which is to say the beans were almost as large as a dried Fabe de Granja. (I've never seen soaked Fabes, but they must be the size of small pillows.) 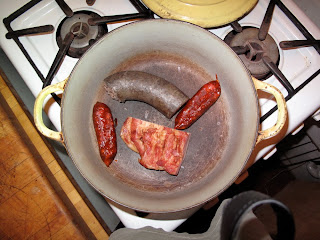 1700 hours
The kiszka, two chorizos and a nice fatty bit of bacon await the addition of the beans. 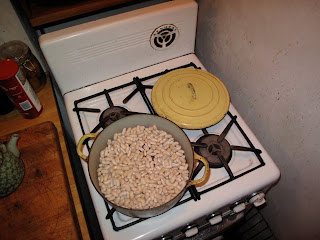 All that porcine yumminess is now temporarily buried. Cover with water. Light burner. Skim the surface scum after the first few minutes of boiling. Lower flame to barest minimum. Most recipes urge the interruption of the simmering process by the regular addition of a jolt of cold water, alleging that this help the beans remain tender. I was tempted to check Mcgee, to see if there is any scientific data to support this contention, but instead I just went ahead and did it anyway. 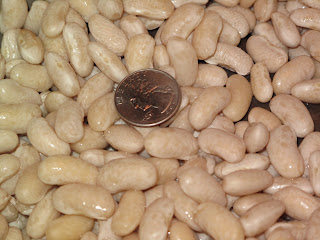 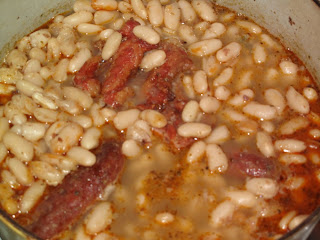 Almost immediately the cured meats began to render their fat, infusing the beans with smoky cholesterol goodness. The kiszka collapsed into a grainy crumble less than fifteen minutes into the long, slow simmer, leaving nothing but a shrunken and miserable scrap of sausage casing, which I removed. The rich odors of the disintegrated blood sausage were, however, pleasingly morcillaesque.
This is a staggeringly simple dish. After a couple of hours remove the chorizos and the bacon, chop them into bite sized bits, and stick them back in the pot. Aside from the pork, the only flavoring comes towards the end of the cooking with the addition of the world's easiest sofrito: three or four chopped cloves of garlic are sauteed golden in olive oil, then in goes a tablespoon full of one of my favorite of all ingredients, sweet pimenton

, a couple more of flour, and a sachet of saffron. Mix this into your beans, give it another half an hour or so of melding and simmering, a bit of salt, and voilá! Insanely delicious, given that this is nothing but beans and a few inferior bits from a pig. How much better could it be with the authentic giant bean? I intend to find out. 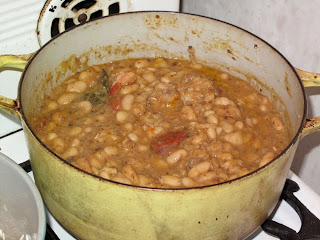 You mean that a pilgrim to Compostela is going to find herself consuming the fabulous fabada without even leaving the pilgrim path?