I'm in Cuernavaca, Morelos, for "Cinema Planeta," an environmental film festival founded last year. The visit is also an Antarctic get-together; both Sylvestre Guidi, the cinematographer on Ice People, and I, the sound recordist, are joining director Anne Aghion as she presents the film here. It's our first in-depth reunion since we parted ways three years ago in New Zealand after spending months together on the ice. The weather here makes a nice contrast with minus 40 and gusting polar winds. They call Cuernavaca the land of eternal spring, and each and every day here has been dominated by an immaculate blue sky and unwavering temperatures in that range of eternal pleasantness, the mid 70s. I didn't realize until I got here how long it has been since I was last in Mexico, and, not coincidentally, the extent to which I had let myself be subtly influenced by the tidal wave of negative media presented in the great north in the intervening years. Now, a week after arrival, sitting at the wrought-iron tile-topped tables of the Los Arcos café in the zocalo in view of Hernan Cortes' palace, with the brilliant tropical sunshine filtering down through a stately row of shade trees, my certainty that I would be kidnapped or caught in the crossfire of some drug-gang turf-war seems hilariously silly.
It's true that Arturo Beltran Leyva, capo di capi of the Sinaloa cartel, was taken out in an eight-hour long hail of bullets right here in Cuernavaca just three months ago, in a tactical assault mounted by Mexico's answer to the Navy Seals. Although Morelos is landlocked, they were chosen for the mission because every other branch of the armed or police forces was considered leaky; it was assumed that if anyone else was involved Beltran Leyva would be tipped off. The taxistas gossip holds that the government is floating on a tsunami of cocaine bribes and I've been told that the Beltran Leyva takeout only happened as part of the government's collusion with "El Chapo," his rival. But while sipping a michelada in the park this narco intrigue all seems extraordinarily distant, and even improbable. Perhaps I'm the victim of a different kind of seduction, that of the bourgeois pleasures of the tourist life on the zocalo.
I had forgotten, as well, that despite NAFTA, globalization and government corruption, Mexico is eternally undaunted in its revolutionary fervor. The struggle for an endlessly unsatisfied and postponed justice, for human rights and the equitable distribution of land and resources, stretching from Emiliano Zapata to Subcomandante Marcos of the EZLN, continues. 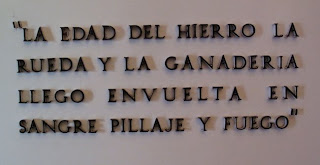 Hernan Cortes' palace has been converted into a museum celebrating the accomplishments of the indigenous peoples he decimated. "The age of iron, the wheel and cattle arrived wrapped in blood, pillage and fire." 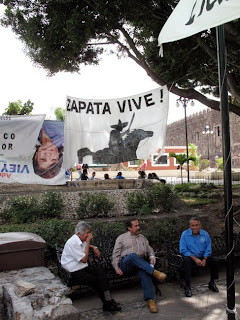 Zapata is the ideal revolutionary icon, since no bad word can be said against him. Like Jose Martí in Cuba, he is invoked by both ends of the political spectrum. Here in the zocalo his flag flies as part of a tent city expressing the demands of the SME, the Mexican electrician's union. But since Subcomandante Marcos and his Chiapan Zapatista army, this iconography has taken on a new resonance. Does this banner suggest solidarity with the outlaw Marcos, or the revolutionary hero, or both? 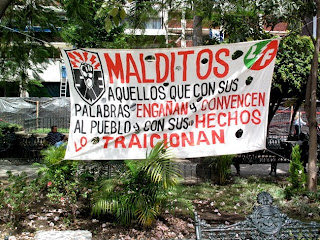 "Cursed be those who with their words cheat and convince the people while betraying them with their actions." 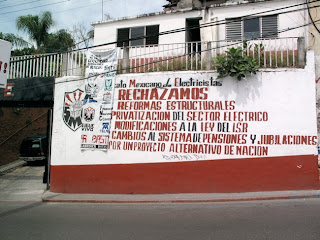 "In favor of an alternative national project, we reject structural reform and privatization of the electrical sector... and changes to the pension and retirement system." 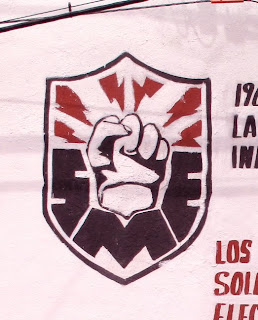 Mexico has a spectacular tradition of machine-age art-deco graphic design, and the SME union logo is a great example, combining the fascist impact of red and black with the electrified fist of the socialist worker. 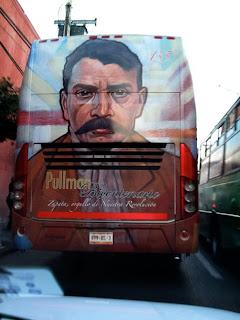 Emiliano emblazoned on a pullman coach.

In addition to Ice People, I recommend the films Below Sea Level, L'Homme aux Serpents, No Impact Man, and A Blooming Business.