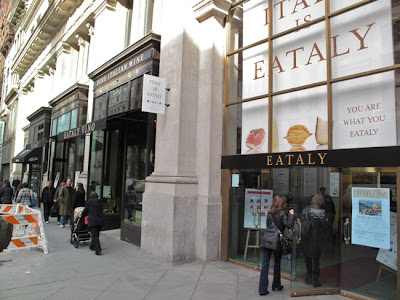 The latest culinary shangri-la in Manhattan is Eataly, a 42,500 square foot (as advertised on their facebook page) megamall, cattycorner from the flatiron building at 23rd St. and 5th Ave. People love this place, and even if people are sometimes trying, I love food, so I made it a priority to go for a visit as soon as possible after my return from France. The feeling has something of a collision between a supermarket and a food court. There are seven restaurants dotted throughout a vast retail space filled with piles of every imaginable Italian delicacy. It's a bit like an airport in the way that the eateries are simultaneously inside but apparently doorless and open to the wide world. Picture all the seating in one of the lozenge-shaped terminals at LaGuardia removed and replaced with gleaming shelves of pasta. 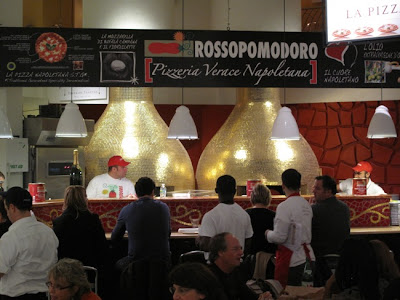 The strangely Sbarro's-looking brick-oven pizza joint at Eataly. I quite like the disco-ball ovens, perhaps the legacy of Mario Batali's Lower-east side club-crawling days. 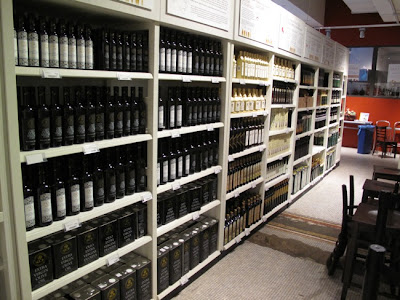 A few of the olive oils on offer at Eataly.

I haven't sat myself down and eaten in the place yet, and especially in New York one imagines that this is the principal point; Eataly isn't a food store with dining options, it's really seven restaurants using the shopping possibilities as the justificatory glue holding them together in one location. But from the shopper's perspective, there is fabulous stuff in Eataly: fresh figs, enough olive oil to make an artificial lake, dangling legs of prosciutto, an entire cookbook shop, and a bakery where you can watch bakers behind glass plumping and cossetting their loaves in preparation for loading them into the oven. 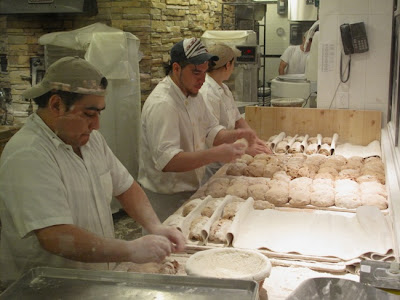 The bakery-behind-glass at Eataly, my favorite feature.

Eataly is, all in all, spectacular, teeming with happy customers and goggle-eyed tourists whose minds seem to be blown by the amazing offerings. With all that abundant goodness, I've been wondering what it is about the place that rubs me the wrong way. The other day I stopped into Caputo's, at 460 Court St. in Brooklyn, for some of my favorite grilled and marinated artichoke hearts, and it hit me. 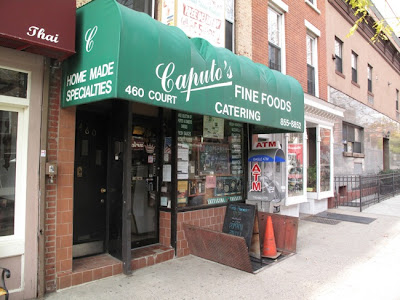 Caputo's, for those who haven't been there, is a tiny Brooklyn food shop run by two Italian brothers. Over the last few years they have gradually taken over daily operations from their parents, a transition that accelerated after the passing of their mother, who I believe to be the originator of the artichoke hearts. If I can trust my palate, the brothers have not changed anything about the artichoke hearts, nor so much as one square inch of formica countertop, making Caputo's a sort of old-world throwback to a time when the Lower-east side was dotted with "Appetizing" stores and dozens of family salumerias thrived in the Italian immigrant neighborhoods of South Brooklyn. 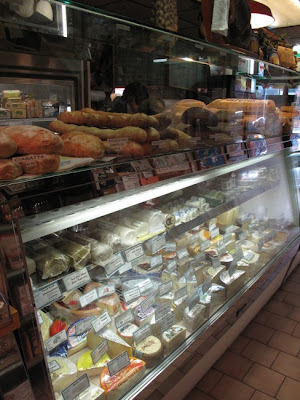 The cheese counter at Caputo's, which dominates the front of the store, forcing customers to snuggle past one another sideways on their way to the olive bar.

The store is roughly the size and shape of the railroad apartment I lived in for fifteen years on Essex St. Long, narrow, and claustrophobic, it is perhaps ten feet wide, although for much of its length most of the space is consumed by a glass fronted display counter full of cheeses, peppers stuffed with provolone, marinated mushrooms and, yes, the grilled artichoke hearts, so that customers coming in and out must edge carefully past one another. I'll estimate that Caputo's offerings are crammed into approximately 500 square feet. Therefore the entire store would fit into Eataly 85 times over. 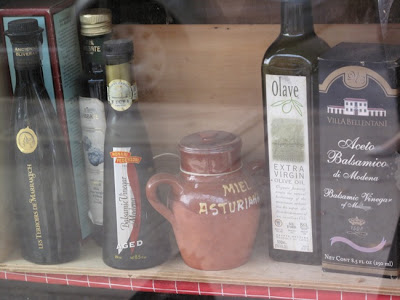 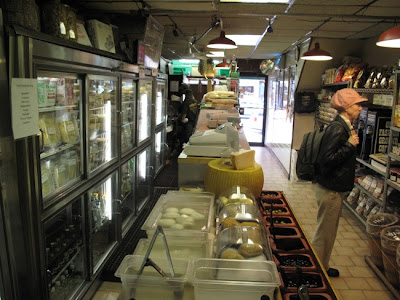 The entirety of Caputo's.

Although the Manhattan Eataly is modeled after the debut Eataly in Torino (yes, obviously, Eataly is a chain, with more planned), this is nonetheless a contrast between American excess and an old-world sense of proportion. And while I'm certain the army of buffed and perky employees at Eataly were obliged to sit through classes on the differences between Coppa piacentina and Capocollo di Calabria, with a quiz on just which pastas are made with doppio zero flour, my preference for Caputo's is also about trusting the curatorial instincts of the family. There isn't room in the shop for five hundred olive oils, but I have a high degree of confidence that whatever they have will be excellent. The other day I bought a bottle of Chilean oil there, something I would never do at Fairway (and would be surprised to find at Eataly). It is delicious. I'm certain I could wait in the vast olive oil aisle at Eataly for the resident oil expert to come and regale me with tasting notes and biographical data on the producers of dozens of bottles, but at a certain point, please, just pick your ten best and let's move on. It's the creeping cancer of choice. 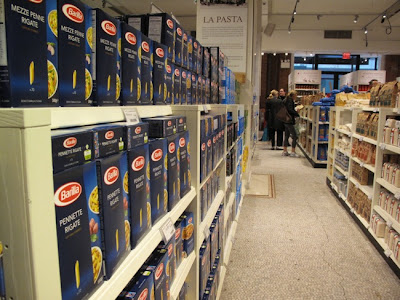 Some of the pasta at Eataly 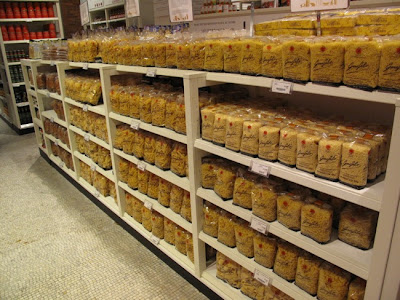 A bit more of the pasta selection at Eataly 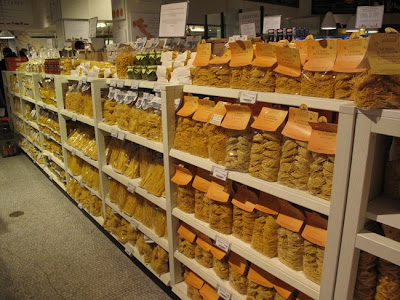 In case you need some dried pasta, Eataly has some. 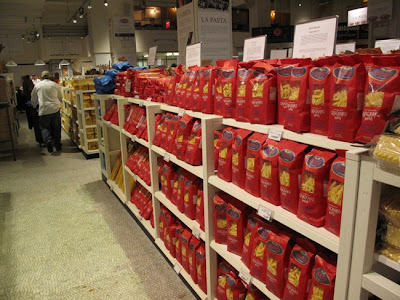 By now I'm paralyzed. Eataly has more square footage devoted to selling rafts of dried pasta than the entirety of Caputo's. 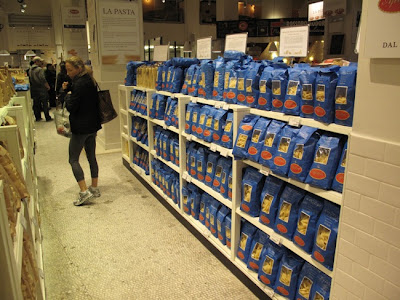 This is not a joke. It's Andreas Gursky does pasta, except it's real, not photoshopped. 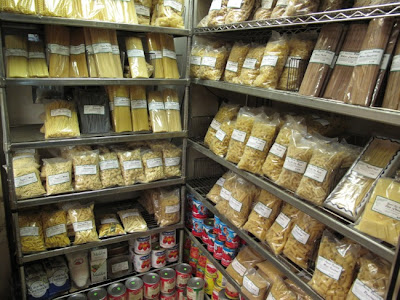 The pasta corner at Caputo's. All made in the USA, because they make it themselves. You don't like it? What's wrong with you? It's not imported from Italy? So therefore you don't like it? What are you thinking? Go somewhere else, then. This pasta is delicious, so delicious that I only cook it only special occasions. Otherwise it would be dangerous.

Please bring some paste from Caputo's next time you return to the swamps!