Or, Happy New Year, in Vietnamese. Today, for once, the incessant hustle and bustle of Vietnam has slowed by a factor of ten. Hundreds (instead of the usual thousands) of motorbikes are circling the streets of Dalat, but riding them are men dressed in their Sunday best, taking their girls out for a spin, or troupes of youths enjoying a drive on the first day of the year. I don't think I've seen a necktie in Vietnam except on television, but today I've encountered dozens, worn under flash suits. It is almost inconceivable, but commerce has ground to a halt. 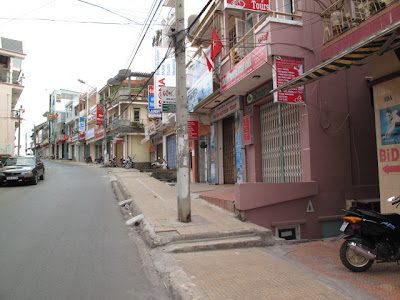 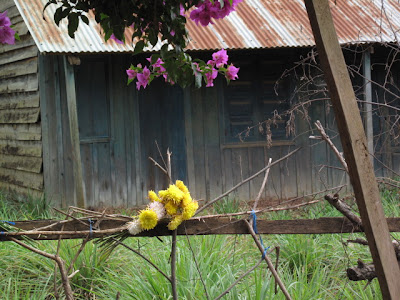 Vietnam celebrates the "Chinese" or lunar calendar New Year, and it is perhaps the most import holiday, with moral, spiritual and familial significance. It is not a grand public fete, but rather a day on which families gather across the land, spending time together and eating. The unprepared and starving tourist must wander the streets looking for the odd open restaurant, for the Vietnamese are at home, consuming Banh Tet, a sort of giant rice-based tamale, or so it looked while watching them being made at Cat Tien National Park a couple of days ago. Rice, bean paste, shallots and bits of cooked meat and pork fat are fashioned into a bundle, wrapped tightly into a flattened cube, and boiled, for a very long time. Ten to twelve hours, I was told. I'm hoping I'll get to try some. 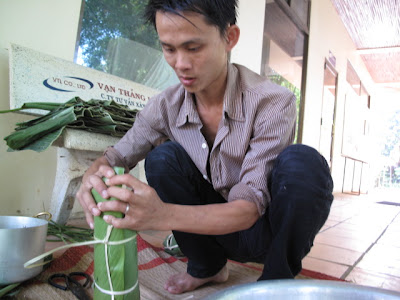 It seems natural and logical that the New Year should be a time for taking stock and of trying to look forward to a prosperous future. Last night someone told me that "on this day we try to only think about and remember the good things, and leave the bad behind." While all we have left of this notion is the fading tradition of the New Year's resolution, in Vietnam people greet the New Year dressed to the nines, and on the first day of the year they are careful to be positive and friendly, instead of hungover. Being rude, violent or venal on this most important day is thought to sully the entire year to come. The guard at the Ta Nung valley was all smiles today, where he had been surly and near-confrontational on my birdwatching visit a week ago. His small outdoor table held a vase full of yellow chrysanthemums, another key element of Tet ritual. 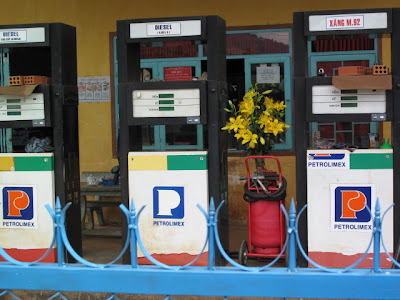 For at least the last couple of weeks vast rafts of yellow flowers have been available for sale on the roadsides, at intersections, and in the markets. Chrysanthemums are cheap, and favored, but almost any yellow flower will do, from marigolds to pricey orchids. These are considered harmonious, auspicious, and all those other lovely pseudo-oriental adjectives based on oversimplified translations of undoubtedly complex and "inscrutable" Chinese notions. On New Year's day they adorn Buddhist shrines, the doorways of homes, the shuttered gates of businesses, and tables everywhere. 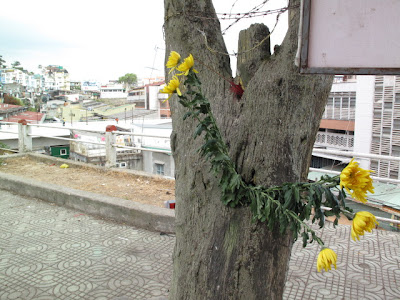 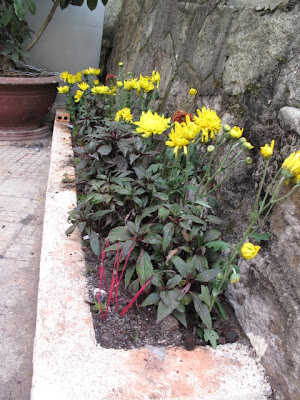 These chrysanthemums have not been planted; the stems have simply been stuck into the front yard planter-box. Note also the consumed incense sticks in the front corner of the box. 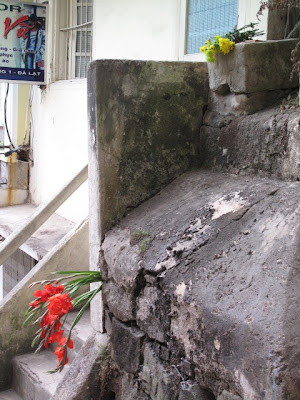 Until I arrived here, I had no idea that Tet meant "New Year" in Vietnamese; I only knew the word from the "Tet Offensive," the massive countrywide assault by the North Vietnamese forces and sympathizers of January 31st, 1968, in contravention of an agreed-upon cease-fire intended to preserve the holiday. To behave in such a dastardly fashion in the context of the Vietnamese conception of the new year was either a communist rejection of religious superstition or a bold gambit demonstrative of the North's unwavering belief that they were in the right. To attack on such a day must have brought an enormous psychological advantage, for taking violent action on Tet could only, I think, have been done with a persuasive and perhaps infectious courage of conviction. I've heard the offensive described as the turning point in the war, but I was only four years old when it happened, so I don't know if the American press reported on this psychological dimension of attacking on Tet. Do any fogies out there remember? Today, in Dalat, the Tet Offensive seems all but forgotten, although it was one of the only occasions for armed conflict in this comparatively unscathed city. The bad has been left behind, and it's time to accentuate the positive.