First loaf of the year 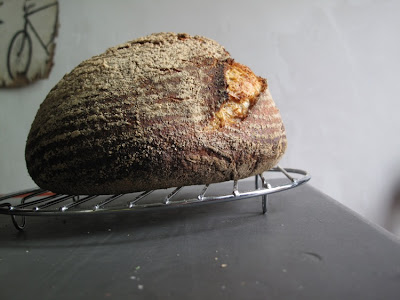 Impassioned bread-baking and relentless world travel seem close to incompatible. Even though I'm a purist whose bread only involves three ingredients--flour, water, and salt--I failed to find any opportunities to bake a few loaves while tramping about in the National Parks of Vietnam. Before leaving at the end of December, I had distributed samples of my sourdough starter to diverse friends, family and acquaintances in the hopes that some would survive until I returned. When I got back I had scarcely time to locate someone who hadn't killed it off (thanks, Mom!) before I departed for Haiti on a film shoot. So it wasn't until this week that I managed to fire up the oven. 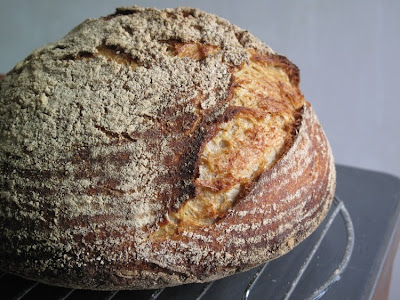 Like the Sugarhill Gang said, I don't mean to brag and I don't mean to boast, but I like hot butter on my breakfast toast. Also, I like a crisp, nutty crust and an open spongy crumb, and it's just like riding a bike, apparently, because if I say so myself my first effort for 2011 is an unqualified winner. No yeast involved. 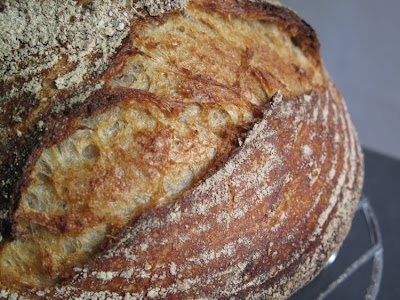 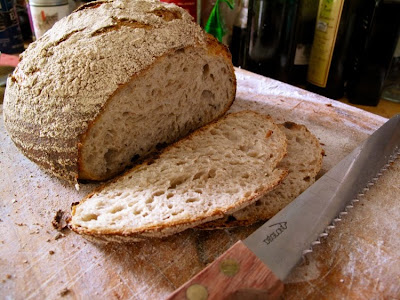 Technical details in the comments.

My digital kitchen scale recently bit the dust thanks to over-exuberant cleaning, so I had to go old-school for this loaf and simply measure things out.

This is essentially a sourdough version of Jim Lahey's "no-knead" bread.

Take two and third cups of King Arthur white bread flour, two thirds of a cup of organic whole wheat flour, half a cup of approx. 75% hydration whole wheat sourdough starter and a generous 1.5 cups of tap water; mix and autolyze in a bowl for about 45 minutes.

Fold in two tablespoons sea salt inside the bowl, folding the bottom of the dough over the top and rotating the bowl slightly for about twenty repetitions.

Cover with plastic wrap, allow to ferment for about ten hours at 65 degrees.

Allow to return to room temperature.

Empty out onto a lightly floured surface and "french fold" or "letter fold" once every twenty to forty minutes, or about four times total over four hours, replacing the dough in the bowl between folding episodes.

After final fold, gently shape into a boule, doing your best to tension the surface by pinching together the dough into a seam on the bottom, then place in a basket dusted with rice flour with the seam side up.

Final proofing was approx. two hours in a 70 degree kitchen.

An hour or so before baking, preheat oven and a dutch oven with its lid to 475 (I would like this to be hotter, but my oven seems to max out at about 475).

Once the dough has doubled in volume in the banneton, remove the dutch oven, take off the top and dump the dough seam side down into it. Put the top back on and get it back into the oven as fast as possible.

Bake 25 to 30 minutes, then open the oven and remove the top of the dutch oven and bake for another 10 to 12 minutes.

I put a doubled up sheet of aluminum foil underneath the dutch oven to prevent the bottom of the loaf from scorching. Baked black is nice, but scorched is nasty.

Take the loaf out of the dutch oven when the top is a ruddy chestnut color. Air it on a cake rack for at least an hour before you cut into it.

Send me that recipe so I can print it out ...
AFter all, I baby-sat your starter.
Mom

maybe it is time to get a job. I still owe you a scale.

I'm not sure I have much more recipe than what I put here in the first comment...

love the sourdough interpretation - it helps to read Bittman - I wrote about it here - http://whatwasieating.blogspot.com/2009/10/revolutionary-bread.html

Wow, Rich! A beautiful loaf, very impressive! I can almost taste it and I'm reading this months after you've baked it.
Unfortunately, I'm finding little motivation for baking living over here in FR when I can just wander off in almost any direction and find tasty bread or pastry.