Going back to Vietnam

My story on the phenomenon of Vietnam War tourism and US veterans who return to visit the places they once fought ran yesterday in the Sueddeutsche Zeitung, although not in their online edition. Today is the anniversary of the Saigon airlift. Here's the pre-translation original:

On the telephone, Mr. Vu speaks English with a clipped, military precision, quickly dispensing with the logistics of the next day’s excursion. “Do you need to visit Khe San?” he asks. “No? Fine. Just to confirm: the driver will pick you at 10:15 in Hue and bring you here to Dong Ha, where you will collect me and drive up into the DMZ.” Mr. Vu sounds like the real deal, a veteran of the Vietnam war; it is almost like the planning of a tactical assault. Mr. Vu is one of the very best, but there are many people in and around the ancient Imperial City of Hue who do what he does. Vu is a DMZ tour guide who takes visitors and Vietnamese alike on customized trips through the many notorious locales dotted along the former border between North and South Vietnam. 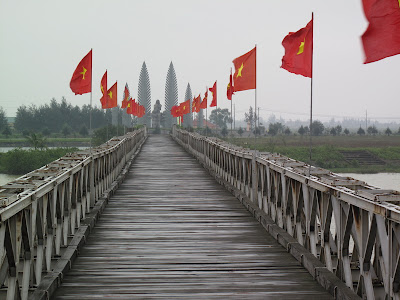 Replica of the "Peace Bridge"

Demilitarized zone tourism is a thriving business in Hue, something that would be impossible if the wounds were still fresh. The savage conflict that unfolded here is quickly receding into the fog, not of war, but of distant memory. Overwhelmingly youthful, the population of Vietnam seems focused on the future and the country's bustling, Chinese-style economy, while America is deeply mired in the conflicts in Iraq and Afghanistan that have defined war in the present millennium. In the inevitable comparisons the lessons of Vietnam would seem to have been forgotten; for most, the war has become history. But not for the veterans who fought here.

Along the esplanade on the north bank of the Perfume River, near the gates of the famed Hue Citadel, street vendors hawk used dogtags, the steel identity badges all GIs wore around their necks, listing their name, blood type and religious affiliation. Apparently authentic, they are lined up on a low stone wall along with other knick-knacks: North Vietnamese medals, Soviet-style enameled communist friendship pins, and antique Chinese porcelain. Not far away, behind the ancient and imposing walls of the old city, stand rows of tanks and US artillery seized by the North in the conflict known only here as The American War. Dozens of agencies dotting the tourist quarter of the city offer tours to the DMZ. Options range from an inexpensive day in a bus full of other travelers to the kind of individual tailored experience Mr. Vu offers, on which former servicemen can seek out the particular places that were of personal significance to them forty and more years ago. 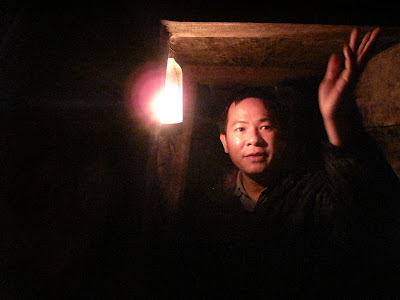 Inside the Vinh Moc tunnels, where North Vietnamese lived underground on the edge of the DMZ in order to avoid American bombs. The network of burrows is now a showcase bit of propaganda intended to underline the resilience of the outgunned but ultimately victorious North.

Mr. Vu, it turns out, is 34 years old, born in 1976, the year after the Saigon airlift. He is extraordinarily knowledgeable. He knows which branches of the US forces served where, and when, and which regiments were involved in which conflicts. On the drive to the preposterously named “Peace Bridge,” across the Ben Hai River, Vu pulls out a binder full of maps and Life Magazine photographs showing the landscape as it appeared in the late 1960s. The tranquil but dreary rice paddies stretched out on either side of the 17th parallel appear in them as a cratered, lunar devastation, like a heavily polka-dotted carpet.

It is gray, and raining, and peasants are driving their water buffalo along the muddy banks above the paddies. There is almost nothing left to indicate that the DMZ was the scene of some of the war’s heaviest fighting. The southern half of Quang Tri province, below the Ben Hai, was the first area in the south to fall, and the area to the north, Mr. Vu says, was the most heavily bombed of all. 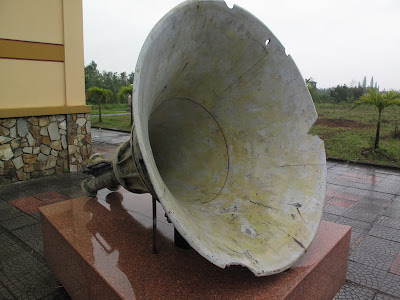 Replica of the battle-scarred and bullet-holed loudspeakers used by both sides to broadcast opposing ideologies across the Ben Hai River.

In many ways, this is a simulated experience. The Peace Bridge is a copy, right down to the guard booths at each end and the towering columns of gunmetal gray loudspeakers, non-working replicas of the ones which used to face-off, broadcasting competing propaganda across the river in an incessant, deafening battle of volume. All this was bombed to splinters; these reproductions have only been here for the last ten years or so, Mr. Vu says, to satisfy the tourist demand. Why, a visitor wonders, do so many people want to see the DMZ?

“Most of my clients,” he says, “are in their 40s and 50s. Khe San, Hamburger Hill, the DMZ, these places are familiar to them from books and movies.” DMZ tourism has gotten lots of free publicity from Hollywood. Nonetheless, the phenomenon began with Vietnam veterans in 1991, the moment the US eased travel restrictions that had prevented its citizens from visiting the country. “So many of them are my clients,” says Mr. Vu. He estimates that in 1999, when he began giving tours, 30% of those he guided had seen active duty in Vietnam, and still today at least one in ten are veterans. 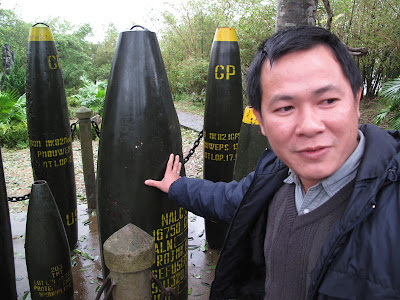 Mr. Vu with artillery shells, carefully repainted with the identifying codes and letters of US ordnance of the period.

Rob Allerheiligen, who was a First Lieutenant in the US Marine Corps in 1969, at Monkey Mountain outside of Danang, wrote in an email that “I think I always thought I would come back some day.” He spent a day in 2010 with Mr. Vu. “Even though I had not been stationed at any of the sites we visited, I had friends who were, and I have read enough about Marine Operations…to know what I was looking at and to be impressed at what those Marines accomplished there.” He says he experienced a “funny feeling” landing at Danang almost 41 years to the day after he deployed. “There was a flutter in my stomach and an increase in my heartbeat.”

Glenn Prentice experienced the siege of Khe San on the notorious hill 881S as a forward artillery observer, one of only 17 out of 350 Marines there who was neither killed nor wounded. In 1995 he felt “overtaken by an overwhelming urge to go back to Vietnam,” and returned on his own to the hilltop scene of his youthful trauma; the siege began on his 19th birthday, in 1968. “You come back with guilt that you survived,” he says. But the sense of obligation he feels as a survivor seems not only to extend to his fellow American servicemen; after making friends with a North Vietnamese colonel who had fought at Khe San as his enemy, he collaborated on building a water treatment plant in a village near Hue, and since his unlikely friend's death he has helped the man's daughter with her college expenses. “I promised I would take care of his family,” Prentice says.

“When you have so many traumatic events, and when you are so young, they are basically permanently imprinted in you,” he says. “You need to go back, because at times it feels surreal.” He has now returned 14 times since his first revisit, and helps other veterans who aren't sure how, or whether, they can manage the trip. Their reactions “run the whole gamut,” he says. “Sadness, depression, relief.”

“They are very quiet, and don't really want to share,” says Mr. Vu, barreling back towards Hue in a minivan through the misty rice paddies of today's utterly transformed Vietnam. “They're very emotional. I don't know why.”

Email ThisBlogThis!Share to TwitterShare to FacebookShare to Pinterest
Labels: shameless self promotion, vietnam

For those contemplating a Vietnam visit, Mr. Vu may be reached at vudmz (at) yahoo.com.

My father went back in the mid-90s. He said that as a kid in Kensington (Philadelphia) he never even dreamed he would get to travel the world. It was a moving experience for him on many levels to return to Vietnam on holiday some thirty years later. Thanks for all your postings. Regards,