Me and Eddy (Updated)

A few weeks back, superstar portrait photographer and honorary* member of the Brooklyn Pinarello User's Group, Wolfgang Wesener, dropped me an email with a hot tip. The greatest cyclist in the history of the sport was shortly to venture out from his lair in Belgium on a rare visit to New York.

Known for obvious reasons as "the cannibal," Eddy Merckx won the Tour de France five times, a total since eclipsed, but in his era he dominated the sport more completely than any rider before or since. He held the one-hour record and triumphed in innumerable classics, including the savage Paris-Roubaix, which he won three times. He is a legend, at the top of any list of the most famous Belgians in history. There is a subway station in Brussels named after him. The man walks the streets of Flanders like a living god. 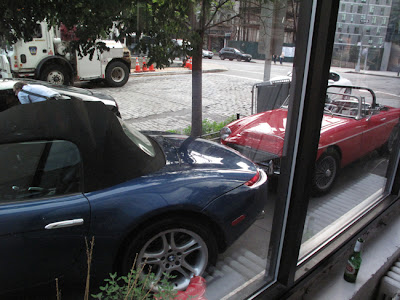 Did I want to come along and drink free beer and meet the monster-legend? Certainly! The event was a press-tivity celebrating the fifty years of Bicycling Magazine, held incongruously at the Classic Car Club on lower Hudson St. To accommodate the guests, the Car Club had emptied their showroom onto the surrounding streets; the sidewalks outside were strewn with Aston Martins and Porsches.

Inside, they had wine, and cheese, and some of the latest carbon-fiber bicycles manufactured under the Merckx imprimatur. While these feather-weight ugly ducklings are all the rage, it should be pointed out that Merckx himself rode in an era when men were men and bikes were made of steel. 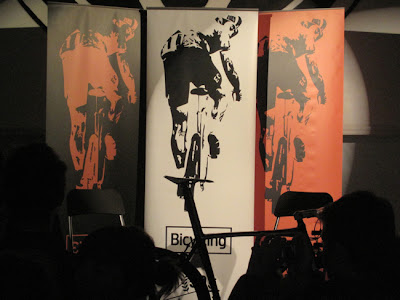 The event logo is inspired: a view of Eddy's posterior, with the man looking back at you over his shoulder. It's a reminder to the many, feebler, one-time followers that the best they could manage was to approach the back end of greatness.

I was focused on the cheese platter, but Wesener had an ulterior motive. He hoped to convince Merckx, or Merckx's people, or Merckx's patrons at Bicycling, to schedule a sitting for a portrait. While I gobbled canapés and helped myself to pair after pair of the complimentary bicycling socks

on offer at the door, Wolfgang schmoozed. He has photographed flamboyant denizens of the Manhattan nightlife demi-monde of the 1980s, patrician vintners of the grape-clad hills of Tuscany, and innumerable superstars of the crank and cog, the stage and screen. A few choice names of former subjects, a list varied gently depending on the context, are enough to serve as an impressive resumé. Within moments he was back, breathless. Merckx was due to fly back to Belgium early the next morning, but at the end of the party he might spare a few minutes. There was only one problem. Wesener hadn't anticipated being able to photograph at the very event. All his gear was 30 blocks north, in his apartment. Would I consent to stick around and keep an eye on Merckx, while he went to collect it? I looked around cautiously, trying to ascertain whether they were still serving hors d'oeuvres. "Sure," I said, spying a tray of saté'd chicken skewers, "Why not?" 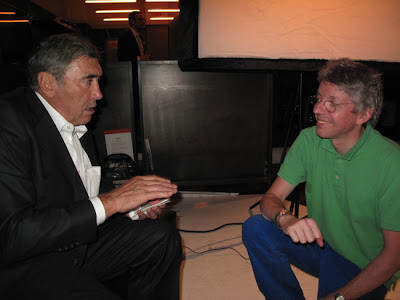 And so, without quite intending to do so, I had volunteered to be a photographic assistant for the evening. A short round-trip taxicab later Wesener returned, and I was helping set up lights, run power cords and sit for test portraits. Suddenly, it felt like a day at the office. It was all remarkably like preparing to film an interview, when the sound person is invariably asked to sit in the "hot seat" and give the cameraman something to focus on. As if we don't have our own work to do. 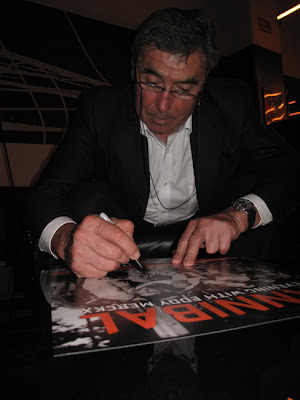 The installation complete, the evening became a waiting game. There is a certain amount of suspense to these affairs, for despite the lavish promises of the minions, the possibility always exists that the celebrity subject will feel overwhelmed by the end of the evening, put upon, hungry for the fine dinner he has been promised. Imperious or petulant, the coddled star may simply announce that he or she has had quite enough of signing cocktail napkins and making banal cocktail chitchat with the teeming masses. Then with a rush the handlers converge, and the whole posse swishes out the door and into the waiting limo and are gone, leaving you forlornly toying with dials on your now impotent, subjectless camera.

But Mr. Merckx is a gentleman. He endured for much of his life the searing burn of lactic acid in his oxygen-starved muscles as he demolished the cycling opposition; such men are not daunted by the social indignities of arranged public appearances. He came and took his seat. I held the reflector. Wesener snapped away, burning quickly through a couple of rolls of film. Film, real film. With just an exposure or two left to go he urged me insert myself into the frame, for a souvenir moment with Eddy.

A few days later, the film developed, Wesener called.
"You're very lucky, Mr. Fleming."
"Why is that?"
"The best picture of Eddy is the one with you in it!"

The next week, a print arrived in the mail. 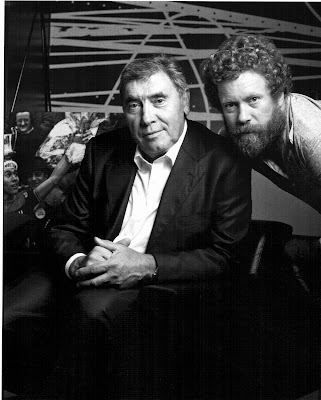 For those of you who are unaware of it, my name, Fleming, was one widely given to impoverished Belgians (the Flemish) who fled Flanders and emigrated to Ireland seeking greener pastures, possibly as early as the 11th century. "Oh, here comes another boat-load of Flemings," the Irish would remark, when on slow days they enjoyed going down to the harbor to watch the ships unload. As this image makes clear, the passing centuries have done nothing to erase the winning, world-dominating DNA of we flatlanders. The shared intensity of gaze, the identical noses, the parallel angles, the commitment to victory at all costs. Me and Eddy.


*Manhattan residents are only eligible to be "honorary" members.

Wesener is not just some dilettante on a Pinarello. While my rides around Prospect Park this summer have been mainly about lowering my cholesterol and getting regular aerobic exercise, WW was in serious training for L'Eroica, the Tuscan cycling marathon held yesterday in the wine country of Chianti. (This explains, perhaps, why on our rides together I was desperately trying to hang on to his rear wheel). Today, in an email, he's written a sort of haikuish summary of the savage ride, much of it held on the unpaved roads that wind through the hills of Tuscany:


it was dark when we started and dark
when we finished
i did the 205 km (details later)
the dirt roads (50% of the race)
were hell (and nearly destroyed me)
it's so exhausting that after a while
you aren't aware of the incredibly
beautiful landscape anymore.