The Ancient Airborne Yeasts of Crete 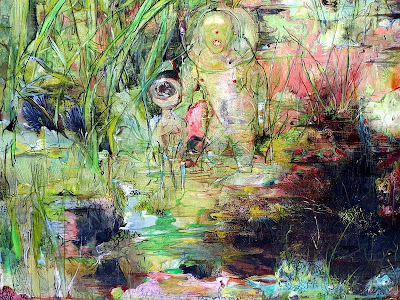 Back in May 2012 I received a facebook message from a recently decamped New Orleans friend, the painter Myrtle Von Damitz III:


Hey,
I'm in the countryside of central western Oregon with the same family as last year--they run a big greenhouse and this is the busy season--my friend's sister married a guy from Crete and they live here half the year and back in Greece the other half. The food here is pretty much like eating in the Garden of Eden and everyone relishes it. Anna and Markos brought back some bread starter--they asked the baker at their favorite bakery in a village in Crete for some and he surprised them by obliging--it's been around since before he became a baker.
They asked me if I had any baker friends back in NOLA to send some to. You're not in NOLA, but if you give me an address I will mail you some of the starter. You're the only bread baker I know! They make some pretty good bread, mostly simple, no yeast.
xo,
Myrt

Intrigued by this unsolicited offer, I replied at once that I would be honored. 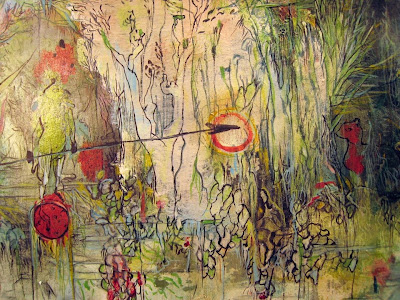 I bake bread using my own starter, the wild yeasts harvested from the air right here in the wilds of Red Hook. Now almost three years old, that starter has been fed and kept alive not only by me, but by house-sitters, subletters, a neighbor and former tenant, my mother, and anyone else I could con into dropping by the fridge and adding some flour and water to the Ball jar during my frequent travels. Even my wife, for whom the kitchen is a rarely-visited and unfamiliar land, something like Uzbekistan, even Katie has helped the starter survive my absences, removing half of the bubbling mass and replenishing the bacteria with fresh whole wheat flour.*

But three years are few, compared with the romance of ancient Greece. Who could say how long that cretan sourdough had survived? Generations, certainly. Centuries, perhaps. It is a fabulously romantic notion, rather like a legendary and likely apocryphal stock-pot said to have been continuously bubbling on a Lyonnaise hearth since the medieval period, never cleaned, with fresh ingredients and water being added every day. Ancient flavors simmered eternally right on down to the present day. Would those ancient cretan yeasts persist? Would the bread baked with it be redolent of the savage, rocky and herb-choked slopes of that most rugged of greek islands? Could such bread be said to be an expression of cretan terroir? 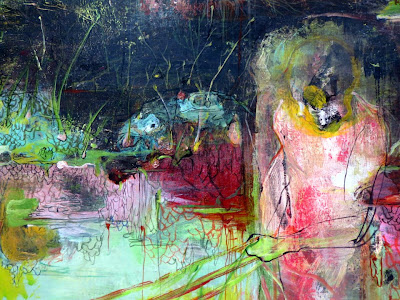 The rationalist in me says no, absolutely not. The yeasts that rise sourdough bread are introduced with the ground wheat that feeds it, or harvested accidentally but inevitably from the air, and it seems to me that very soon after transplanting that starter from Crete to Oregon the local flora must begin to dominate. After all, the flour added is not cretan, nor is the air, and both are constantly replenished in one's baking practice.

Nonetheless, the romantic in me begs to believe otherwise. Could it not be that the strains of yeast, once established, propagate themselves at the expense of the local yeasts? Might they create a stable colony capable of overpowering any freeloading visitors? The many online purveyors of sourdough cultures subscribe to, or at least exploit, this romantic notion, offering things like original California Gold-Rush San Francisco Sourdough, and "Tasmanian Devil" Australian starter. The implication is that by purchasing some far flung fungus, the home baker will be able to marshall exotic flavors and traditions right in their own kitchen.

In this case, romance was obviously going to win out over rationalism. There was only one problem: although I checked the mail hopefully, every day, no starter was forthcoming. Weeks went by. It seemed unsporting to inquire, or pester. 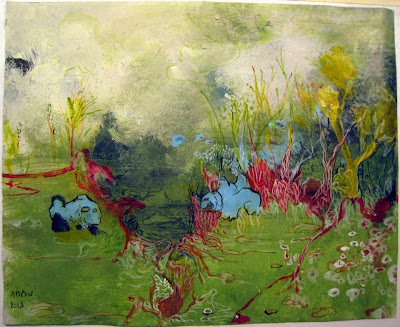 Flash forward 13 months, to June 24th of this year. A post by Von Damitz, with whom I had more or less fallen out of touch, washed up in my facebook feed. It was a link to an article about bread, possible fallacies relating to gluten intolerance, and the sourdough biome.  The pull quote was this:


"Expert bakers are thus essentially bug ranchers, managing their herds to achieve their signature balance between flatulence and, well, that other stuff. The result is a fecundity of enzymes, amino acids, and more than 200 flavor compounds."

Using starter instead of commercial yeast has several benefits. Bread baked with it takes much longer to go stale; it imparts flavor--that famed San Francisco sourness comes largely from the lactic acid produced when the yeasts "consume" the flour in the fermentation process; the intensity of this flavor can be regulated simply by varying the amount and maturity of the starter; it is free of charge, so long as the baker finds some use for the flour and water removed during division and feeding. Another result of this processing is the off-gassing of carbon dioxide; this gassy bubbling is what introduces space and levity into a loaf of bread. The carbon dioxide pockets in the dough ultimately become the crumb structure of the loaf. 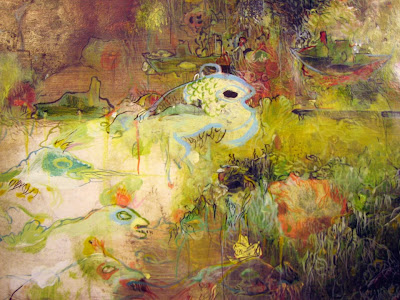 Soon afterwards, Myrt wrote back, typifying the rationalist perspective: "the greek starter was probably no longer greek (or cretan) a month after its time in Oregon, but I'm heading up to the farm tomorrow and bringing a collection jar."

A few days later, on the way to the airport, en route to spending the July 4th holiday weekend in Tennessee, I received another message: "At last, starter is in the mail to your P.O. box, marked perishable, wrapped up the wazoo. They say it's due on Friday."

This wasn't great news. We were due back Monday evening, too late to go to the post office, and although starter can survive just fine in the refrigerator, where the cool temperatures retard all of its bubbling and frothing and dividing and conquering, left at room temperature for too long it can quickly overextend itself and expire in an acidic puddle of its own juices.

I didn't write anything of my concerns to Myrtle. Once back in New York, somewhat worried, I made my way to the Clinton Street post office at the earliest. On July 5th, in England, a gifted jar of home-made rhubarb chutney had exploded, destroying the kitchen of a small apartment, and that had been in the fridge!

I handed over my claim slip and received my wild yeasts, which had been fermenting all along their merry way to Brooklyn. In two small Ball jars, wrapped tightly in paper and plastic bags, I found, intact, and innocuous in appearance, a few tablespoonsful of soupy white liquid. They had clearly blossomed and then died back, for the one marked Crete, despite being half-empty, had at some point oozed out from under its Ball jar lid. The outside of the jar was caked with a now-dried, bready substance. I was lucky indeed that it hadn't exploded, and lucky that Myrtle hadn't screwed the lid on any tighter. 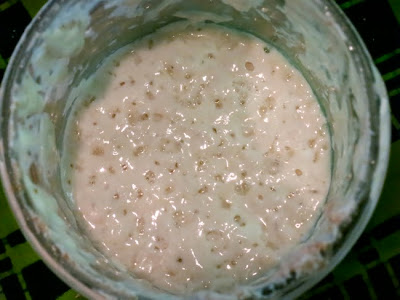 The yeasts were not dead! It took only a couple of feedings (50% white flour and 50% dechlorinated water) before the Cretan starter began to bubble merrily. Holes, like pores, were visible on its surface, and it had doubled in volume. Here I was, in possession of my own little vat of ancient Greece. It was time to bake.** 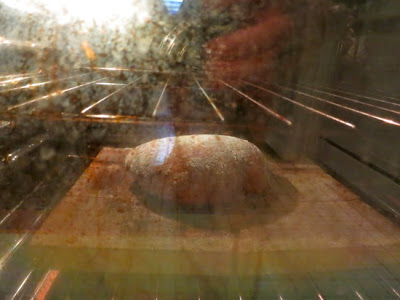 "Cretan ciabatta," on fire bricks at the bottom of the oven. 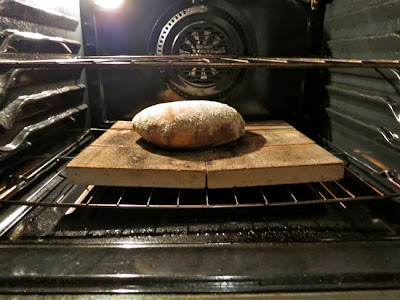 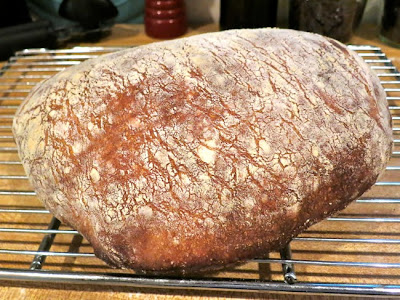 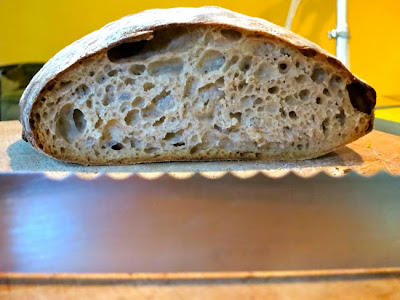 Splendid crumb structure despite the slight overproofing suggested by the largest cavity just below the crust. 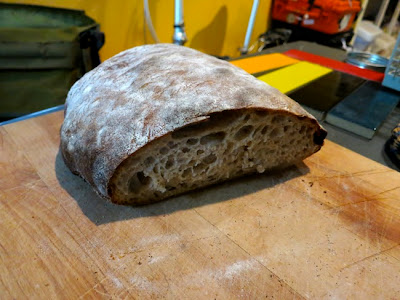 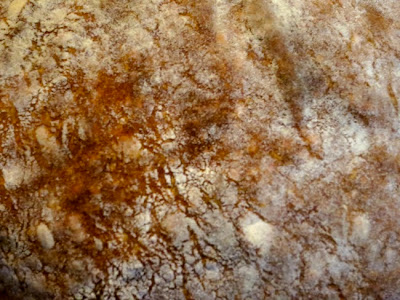 The dough was very wet, for two reasons. I usually incorporate significant whole wheat flour into my loaves, and whole wheat flour is more absorptive than the white flour I decided to use to respect the whiteness of the starter. Also, at 100% hydration, the cretan starter was wetter than my typical mixture. While not soupy, the dough was almost unmanageably flowy. I fermented it overnight in the refrigerator to imbue the loaf with the maximum in Aegean island flavor. In the morning, the dough was worryingly moist. Nonetheless, it was veined internally with a powerful honeycomb of carbon dioxide voids stretched through with springy strands of gluten. It reminded me of the wet dough for Ciabatta, and I treated is as such.

Soon the house was filled with the spectacular aroma of baking bread, albeit more venetian in style than cretan. Was it just my imagination, or was there an herbal edge to it, as of a bouldery Rosemary and Thyme-choked hillside? After giving it an hour on the cooling rack I carved into it. I have never been to Crete, much less to Armeni, in Rethemno,*** so while it may be anticlimactic to report it, I cannot say if my loaf shared the rustic flavors of the village bakery there. But it was delicious, especially dipped into some fine greek olive oil.

Many thanks to Myrtle Von Damitz III both for mailing me the starter and for kind permission to reproduce images of her paintings here.

*Commercial bakeries that bake daily easily keep their starters going for years and even decades, given that constant feedings are simply a natural part of the baking process. Home bakers, and especially travelers, have a more difficult time of it. I have successfully frozen starter and brought it back to life after months away, but I generally find that two weeks without a feeding brings refrigerated whole-wheat starter to the brink of exhaustion and death; if I am home but not baking I try to "feed" it about once a week, discarding half of the contents of the jar and topping it up with an equivalent quantity of fresh flour and (dechlorinated) water. Bread starter has a pet-like tyranny to it.
**Technical notes in the comments.
***These two words, "Armeni, Rethemno," were just legible on a bit of masking tape on the lid of the jar, half effaced by oozing starter.

The loaf pictured in this post was baked more or less after the manner of Chad Robertson of San Francisco's Tartine Bakery, following his very hip and very trendy formula for "basic country bread." Those wishing to make bread like this might wish to google the above elements, but here are the basics.

Cover this very wet dough and let it sit at room temperature (70 degrees-ish) for about 8 hours.

You should now have some visible bubbles on the surface and the volume of your mixture should be much increased.

Add another 300 grams of flour (In this case I added about 225 white and 75 whole wheat; a "real" ciabatta would tend to be all white bread flour). Mix

Autolyze in the bowl, 15 minutes to an hour.

Add 12 grams of sea salt. Mix by folding the dough over itself in the bowl while rotating the bowl a quarter turn per fold, about 40 folds. (Google this technique, if this reads like Greek to you.)

Cover and refrigerate your dough in the bowl, overnight or for up to 24 hours.

Remove from the bowl and allow to rest on a lightly floured countertop until approximately room temperature.

(At this point my dough was pretty much ready to bake, the leavening process having been rather accelerated by the recent warm temperatures--probably 80-ish in the kitchen at least. I put the dough in a basket briefly to get it some shape while preheating the oven and then turned it out onto a peel and got it onto the hot bricks ASAP).

Pre-shape into a loaf or round, put your dough upside down into a basket to rise, if using.