Mulberries for Ruby (with apologies to Robert McCloskey)

On a recent trip to Greece, to visit what might best be described as a sustainable techno-hippie commune, I was astonished, again, by the number of olives growing everywhere. Every curve, every rise of the land, every back yard and neglected plot held stands of the trees, their distinctive gray-green leaves swaying in the Aegean breeze. I asked one of the cofounders of the Telaithrion Project if each and every one of the thousands of oliviers that I had seen from the car window had a putative owner. "Absolutely," he said. "But it is cheaper for the people to go to the store and buy olive oil than to bother harvesting and pressing their own, so many people in this village just let us help ourselves to their olives."

When I got back to Red Hook I described this vision of thousands of unharvested olive groves to my dear friend Erika. Both of us were somewhat horrified by the thought of all those splendid olives falling down to the ground and going to waste. We're accustomed to paying twenty dollars for a liter of fine oil at Caputo's or carefully tasting the $6.99 per pound selection of olives at the bar at Fairway. What paradise to have your own olive tree in your own backyard, we mused, without even taking into account the climate that comes with one! I told Erika that the folks at Telaithrion aren't certain exactly how much of their diet comes from foraging, but that they think it might be as much as 20%. When I had arrived, in their front yard, there were bedsheets spread on the ground beneath two mulberry trees, to collect the fruit.

"Now when you start talking about mulberries," said Erika, "I guess I kind of get it. We have a giant tree up in Rockland County, and I admit we don't do a very good job of harvesting the fruit." It's easy to fantasize about other people's fruit trees, but when it's in your own backyard it's harder to make it happen. In New York City? Who has the time?

Actually, Ruby and I do. My peripatetic freelance existence makes for some intense work when I'm on, but when the calendar is empty I bake bread, make preserves and lounge about the house with my seven-month-old daughter to my heart's content. Inspired by the greeks, and without so much as asking Ruby if she wanted to participate in my jammy schemes, I plonked her in her stroller and we headed out into the wilds of Red Hook in search of mulberry trees. (There are no olives.) 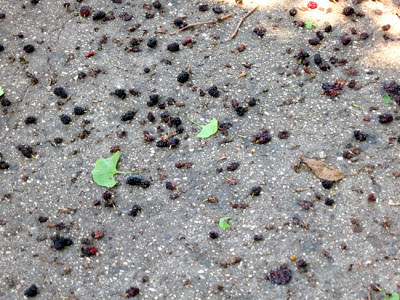 Like wild animals, mulberry trees leave tell-tale sign. Looking down the block from the corner the rich dark berries may be invisible on the tree amongst the green leaves, but the swollen, dark fruits scattering the sidewalk are a dead giveaway. Low-hanging fruit: An early June mulberry branch, brimming with berries. I can't tell you where, or I would have to kill you. 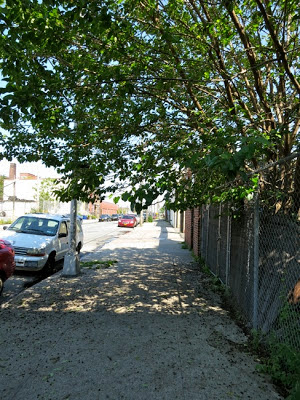 Above, a typical presentation; an unruly tree has long ago breached the confines of its owner's yard, shading the entire sidewalk with its fruit-laden boughs. Perhaps because they are smudged and smeared by passing pedestrians, who tend to collect a seedy, gooey purple paste on the soles of their shoes, mulberries are not on the New York City Parks Department list of officially sanctioned trees. Although there may be exceptions, the eager forager must therefore typically go in search of the overhanging branches of trees planted on private property. Although nobody has ever come out of their house and accosted me for stealing their berries, this possibility does give urban mulberry gathering an added frisson, the thrill of the trespass. My sense that Ruby's irrepressible grin would help take the edge off any such potentially unpleasant encounters was just another reason to bring her along. 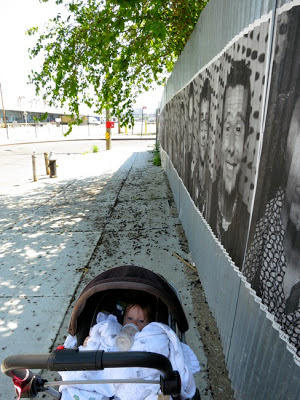 Ruby enjoys the shade of a mulberry tree. Note the dense scattering of fallen fruit on the sidewalk behind her. 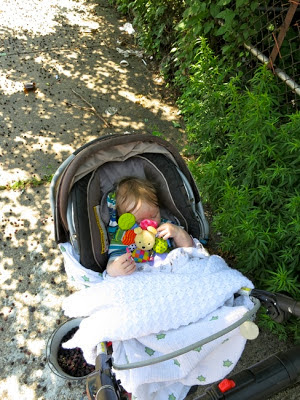 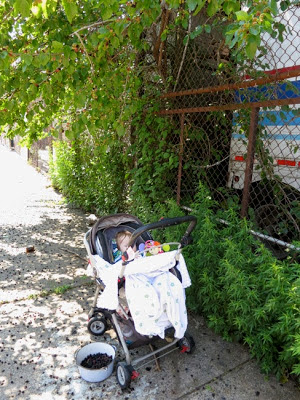 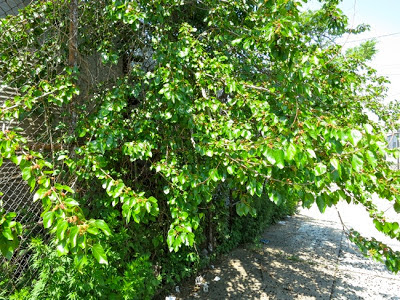 Here an aggressive mulberry has forced its branches through a chain-link fence, soiling the sidewalk with its sugary offerings. 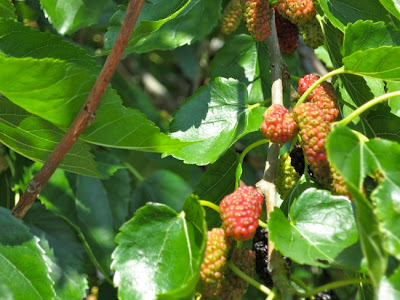 A few days shy of ripe. (I picked the ripe ones before taking this photograph.) 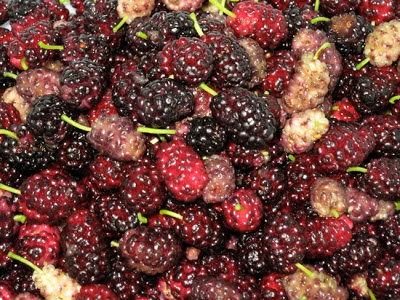 Mulberries come in two varieties, purple, and white. In Red Hook, at least, trees with purple fruit far outnumber those with white fruit, but I did find a few of the latter variety, which are mixed in, above. I believe them to be sweeter, and more highly prized, but perhaps I just think that because they are more scarce. 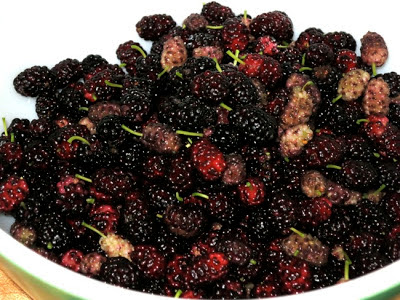 A healthy bowlful, on the kitchen counter. 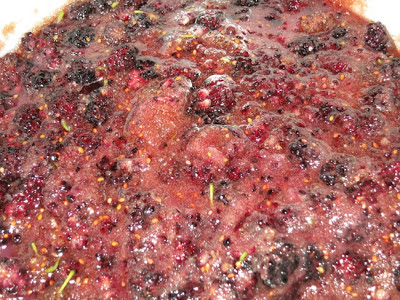 The same berries, after macerating overnight in two cups of sugar. Some people skim off the foam before they begin cooking down the jam, but I don't bother. 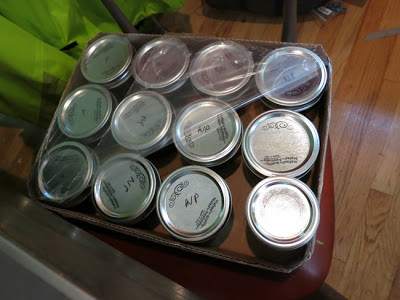 A case of half pints. I would estimate it took approximately 20 cups of berries to make these, and approximately two-and-a-half mulberry-picking man-hours. 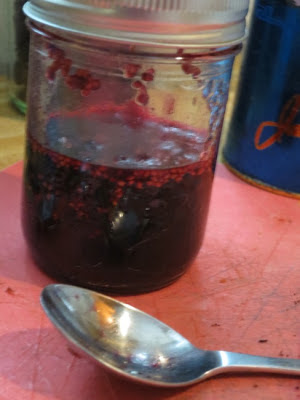 An extra half jar, for immediate use.

Most recipes for mulberry jam call for an obscene amount of sugar, as much as one cup per cup of berries. That's not mulberry jam, that's mulberry-flavored simple syrup. The problem is that even with low-sugar pectin, mulberry jam won't set very well unless the pectin reacts with a lot of very hot sugar. For me this isn't a problem; I don't care if the jam is runny. You are most likely going to be spooning this over vanilla ice-cream anyway. I used about three cups of sugar for every 8 cups of berries.

8 cups of berries
3 cups of sugar
1/2 cup of fresh or bottled lemon juice (you want this for the acid, not the flavor, so bottled is fine, and perhaps more consistent).

Ball Jars (about six half pints)

Wash your berries really well; they are, after all, urban berries, subject to soot and exhaust and I know some of them fell on the sidewalk when you were collecting them. Some nerdlins try to remove the tiny green stems. Really? They are very, very small, and I can't see them having a deleterious effect on the final flavor.

Mix the berries and the sugar in a bowl, then gently crush some of the berries with a potato masher or the back of a large spoon, to release some of the juice. Cover and refrigerate overnight. While the berries are macerating, get a good night's sleep.

Clean and then sterilize your ball jars in a boiling water bath. Put your jar lids to soak in the hot water once the jars are ready.

Put the contents of your berry bowl into a saucepan and bring it to a gentle boil over medium flame. Stir while simmering for a minute or five. (If you want to go the pectin route in hopes of firm and spreadable jam, follow the direction that came with your pectin and add the appropriate quantity now--probably a lot more sugar will be required....) Stir your lemon juice in well and turn off the heat.

Pour your jam into the jars, preferably with a canning funnel, and set the lids. Tighten your jar bands finger tight and process the jars in a boiling water bath (fully submerged) for ten minutes.

Spoon over vanilla ice-cream and enjoy.

jkarah said...
This comment has been removed by the author.
20:23

I was just trying to edit my grammar...didn't mean to delete.

When is Saskatoon Berry season? And what does a Saskatoon berry look like?

Love this blog, especially the pics of Ruby! :-)

Yum! How cute, and lucky Ruby!

was this Sifnos by any chance

Evia, where the Telethraion Project has its HQ up on the northern end.