Artemisia, the bitter herb that keeps malaria at bay

Published today in the Suddeutsche Zeitung:

Standing on a dike in central Uganda, the last of the setting sun glinting on the surface of the rice paddy makes it look like a gleaming sheet of copper. Birds splash. Crickets chirp. As far as the eye can see, young emerald stalks sway in the lightest of breezes. It's a spectacular vista, but it's impossible not to be fearful of malaria. When director Katharina Weingartner called to ask about coming to Uganda to work on her film, Das Fieber, she mentioned that despite visiting some highly malarial areas, the rest of the crew would only be using a Chinese herb, Artemisia, for prophylaxis against the disease. After weighing my skepticism regarding natural remedies against the unpleasantness and side effects of other anti-malarials I've frequently had to take in a career mostly spent working on social documentary films, I reasoned that it wasn't an extremely long trip. Why not give the herb an experimental try? But in that moment, standing in the rice paddy, that decision feels like a very bad one.

Kenyan public health entomologist Dr. Richard Mukabana stands on the bank in rubber boots and gestures across the field towards a long line of farmhands trudging home along the top of a parallel dike. All will at one time or another likely have suffered from the incapacitating fever; some may be carrying it back to their houses at this very moment. But the mosquito, however hated, is no more responsible for the disease than you are; it's a deadly symbiosis, with Anophelesmerely the middleman who transmits the parasite from one human to another. The insect can range over 5km between blood meals; much further than the distance between you and those workers. 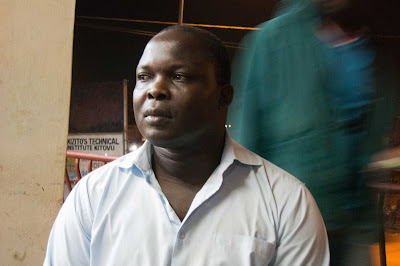 Dr. Richard Mukabana in the night market at Masaka, Uganda. He pointed out that such markets, teeming with chapatti vendors, bus-ticket hawkers, and tire repair and oil change shops are a cultural gap in the interruption of the malaria transmission cycle. In the comparative cool of the evening the bustling commercial and social activity of humans perfectly coincides with the malaria mosquito's most active period in the hours after dusk. Nobody is under a mosquito net at this time of day.

Everywhere over the rice paddy now is the audible whine of a million insects; the water seems to tremble with the density of their larvae. Stooping over, Mukabana collects at random a small sample of paddy water in a test tube. He holds it up: the water is alive, wriggling with tiny baby mosquitos. In a sense the prevalence of malaria in this part of Uganda is a legacy of the colonial period, when vast jungles were cleared for agricultural production. “Normally, land with a lot of forest is not good for the malaria mosquito in Africa” he explains. “If the place had been left virgin, without opening it up to rice cultivation, you would not expect to have the endemicity of malaria in that area.”

Despite recent gains, the disease remains one of the world's most prolific killers. Well into the 20thcentury it was common in southern Europe (the name of the disease comes from the italian mal aria, or 'bad air,' once thought to be the cause), but it is now overwhelmingly an African disease. According to the WHO, in 2017 the continent experienced 92% of the world's 219 million cases, and 93% of the 435,000 deaths that resulted. Researchers like Mukabana can therefore be forgiven for wondering why Africans often seem to be left out of the global conversation around the disease. “Most decisions about malaria control are not made in Africa,” he points out. “They are made somewhere in Europe or in the US, with very minimal or no participation of African people. And if you look at the cultural practices back in Africa, a lot of those are going to be a very big bottleneck towards eliminating or eradicating the disease.” It is sentiments like this that inspired Weingartner to include only African voices in her film.

In another field, not far away, the herbalist Rehema Namyalo tends a different crop, a pungent, bitter weed that she cultivates in her mother's kitchen garden. This is Artemisia annua, a plant with potent anti-malarial properties that grows easily here. It may be the kind of indigenous, affordable solution to malaria that Africa needs. Used for over 2000 years in Chinese medicine to combat fever, it is credited with helping the communists win the Vietnam war, by keeping the Viet Cong malaria-free. The WHO [OMS/World Health Organization] recommended front-line treatments used against malaria today, ACTs, or Artemisinin Combination Therapies, are all derived from it. [In 2015 the Chinese chemist Tu Youyou was co-awarded the Nobel prize in medicine for her discoveries of artemisinin and dihydroartemisinin] Namyalo is not a scientist, but she has been growing, harvesting, drying and distributing Artemisiasince training with the German NGO ANAMED in 2004. Every morning, at breakfast the film crew hand around a jar of it, mixing a heaping tablespoon full with peanut butter, to cut its extraordinarily bitter taste. 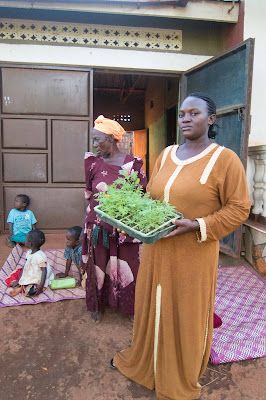 Rehema Namyalo with some of her Artemisia seedlings.

In 2008 Namyalo opened her own clinic based around herbal therapies, where she treats malaria with carefully measured doses of Artemisia infusion [tea]. She teaches visitors and villagers how to cultivate the plant, giving away seeds and seedlings. “I have seen so many positive results,” she says. “[Artemisia] is both a preventative measure and a curative. Before, in those first years, every day we would have 3 or 4 or 5 or 10 people coming and complaining of malaria. Sometimes people would come with their whole family of, say, 8 people, and six of them would be down with it! We no longer have those cases. Now in a month I treat one or two people. Sometimes I can complete a month without anyone coming in with malaria.” Her eyewitness evidence has increasing scientific support; a 2018 double-blind study in Maniema [Congo], co-authored by Congolese doctor Jerome Munyangi, found that similar doses of infusedA. annua and its native African cousin Artemisia afra had better results than ACTs against the parasite. Another study at the Wagagai flower farm in Entebbe demonstrated the powerful prophylactic effects of Artemisia tea.

In a recent policy paper of October 10th, however, the WHO comes out firmly against this herbal regimen: “WHO does not support the promotion of use of Artemisiaplant material in any form for the prevention or treatment of malaria.” Increasingly, the institution appears to be on the wrong side of science.

Standard arguments against the use of artemisia invoke the precautionary principle [according to WikiPedia likely derived from translating the German “Vorsorgeprinzip” in the 1980s], the idea that potential unknown dangers in the implementation of any problem-solving strategy must be rigorously evaluated and eliminated before it is employed. In the context of malaria, however, which annually causes close to half a million deaths worldwide, this creates an ethical dilemma: lives are being lost while international organizations like the WHO urge caution in the use of an evidently successful anti-malarial remedy on the basis that it is unproven. The fear is that resistance to ACTs might develop, but it is far from clear that Artemisinin is the only anti-malarial compound within the herb, whose complexity of compounds acts as a natural combination therapy. With the debate currently raging around vaccine safety and the dangerous entitlement of the anti-Vaxx movement, it is ironic to find the WHO and major pharmaceutical manufacturers in the business of denying science, or at least being very selective in the science they choose to pay attention to.

This selectivity is reinforced by an unwillingness to fund further scientific research needed to prove Artemisia's effectiveness, either because of, at best, western biases against herbal remedies, or, at worst, organized drug industry resistance to a non-marketable product that can easily be grown in the African kitchen garden, dried, and consumed as plant powder or tea at essentially no cost.Accompanying these concerns swirl retrograde colonialist warnings, familiar to those who remember arguments against introducing ARV HIV treatments onto the continent. Africans, it is hinted, do not enjoy a standard of education conducive to treating themselves, or their medical infrastructure is too weak to provide support for regular therapy. The last malarial continent seems to be explicitly required to wait for outside help to cure a disease that remains a major driver of infant mortality. “We have to conclude,” says Dr. Munyangi, “that this is in bad faith, intended to make Africans depend entirely on medicines that come from the exterior, and that Africans shouldn’t develop solutions that are local, less costly and adapted to the conditions of the poor.” 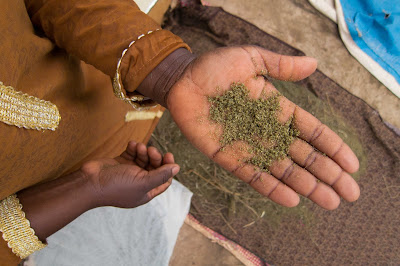 Weingartner hopes Das Fieber can be used to spread the word about Artemisia across the continent. On February 24th,at the Berlinale Africa Hub, she will launch a “Fight the Fever” initiative and distribute ready-to-plant seeds. She is intent on creating a mobil-cinema that will drive from village to village across Africa, showing the film in a multitude of languages. While in Uganda the film crew shared a motel with a traveling musical-comedy troupe called the The Ebonies, who pulled up one afternoon in a battered old green truck full of actors and props, set up a stage in the courtyard, and then drove through the bumpy, dusty streets of Masaka loudly broadcasting advertisements for their theatrical production. Weingartner imagines her film being broadcast in a similar context, complete with free Artemisia seedlings.

The argument that malaria should only be treated, and is only curable using standardized doses of ACTs produced in overseas factories and available for purchase in pharmacies is even less compelling in the face of estimates that in Africa fully 30% of anti-malarial drugs on the market are counterfeit. Pharmaceutical counterfeiting is a vast, multi-billion dollar business that causes as many as 200,000 deaths each year in Africa. [After spreading awareness of bogus drugs on the Congolese market Munyangi was arrested in Kinshasa at the behest, he says of the importers responsible. Granted asylum, he now lives in exile in France.] In this context a therapy that Africans can cultivate and process themselves seems like an obvious response.

One of the problems with prophylaxis is that you only know if it doesn't work. Back in New York, the artemisia grown by Rehema Namyalo and smuggled through customs remains a part of my breakfast routine for a full three weeks. The subject remains healthy, but it is impossible to say whether the herb or just the luck of the draw played a part. But for Namyalo, living where malaria is a chronic condition, the benefits are certain. “In my family,” she says, “now we can complete an entire year without having any cases.”