The Ballad of the Mary Whalen 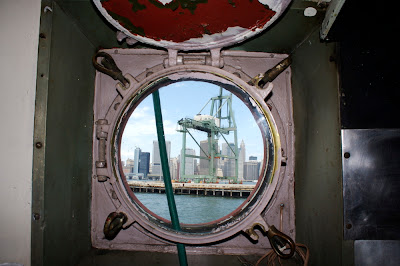 Aaah, is that the Big Apple I spy through my porthole? Delightful

Even before I abandoned rent-controlled Manhattan tenement life five years ago and up and moved to my very own little shack of a frame house in Red Hook, Brooklyn, the latter neighborhood had become a throbbing termite-mound of home renovation, new construction, face-lifting and just all-around progress, as they call it. On the waterfront, the original setting for the play that became the classic Brando vehicle of that name, Red Hook is on the front lines of the epic gentrification still sweeping New York City's neighborhoods, leaving only a few hidden corners of ground too barren for Starbucks. Gracias a Dios we don't have a Starbucks here yet, but the Ecuadorian bagel and caffeinated swill spot where methadone survivors buy their oversweetened coffees has been supplanted by baked, a delightful free-wireless-internet hipster emporium with glowing pine wood walls and puff-pastries filled with goat cheese and herbs, where one manages all too easily to be dinged seven dollars for a designer latte and a muffin.

In there the other morning I ran into my friend Carolina Salguero, one of the first people I met in the neighborhood and herself a gentrification victim who was asked last summer to move on, when her affordable apartment was caught in the rising rental tide. Now she lives in Oyster Bay, Long Island. She still has interests in the neighborhood, however, as the founder of PortSide New York, an NGO which "seeks to breathe life into the relationship between Red Hook’s landside community and the maritime sector—to the advantage of both." Last summer the organization aquired the defunct tanker Mary Whalen, and Carolina spent much of the fall and winter repairing and restoring it. Getting a 172 foot steel ship built back in 1938 into action again makes makes most of the gut renovations of houses around here seem about as daunting as, say, washing a car, and I've been eager to see the beast since she first told me about the project. 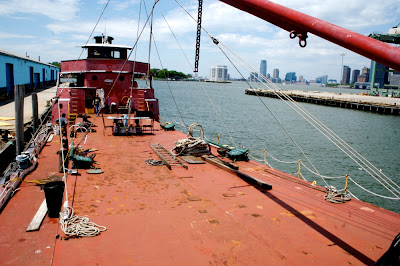 Carolina is big on getting people involved, so I wasn't surprised when the second sentence out of her mouth was a request for me to volunteer at "our first volunteer Sunday," an occasion she seemed almost to have invented on the very spur of the moment to take advantage of our bumping into one another. I mumbled something about the non-sustainable flooring I was trying to get laid down in my living room and then counter-attacked with the observation that she hadn't updated her previously fascinating blog about the Mary Whalen renovation since January. She then mumbled something about someone having suggested she really ought to write a book about it, as if that were an excuse. I took that as an implication that she felt that by blogging it she would be cutting the legs out from under some future publishable opus. Had I already drunk my latte I might have been quick enough to observe that nothing would make a better outline for a book than a completed boat-renovation blog, but it was early and I was still a little thin on the ground. You just might see me on Sunday, I said.

In fact I was the first volunteer to arrive, making me that much more certain that the "spring-cleaning" had been invented for my benefit alone. Fresh from my new floor, in sawdust-covered work pants and greasy suede gloves, I waited for Carolina by the guard-house at the entrance to the Red Hook container port; when I told the guard I didn't have photo-i.d. he said "what are you thinking? This is New York City." Nonetheless, if Carolina would vouch for me when she arrived he would let me in. I've been in the container port only twice before, once to film the behind-the-scenes of a big-budget commercial for a Brazilian shipping company, when we followed a camera crew following Claudia Schiffer walking in front of the Manhattan skyline, before delivering two or three quarter-of-a-million dollar syllables, and once on another shoot when we interviewed a guy who wasn't sure if he was an actor playing a goombah, or a real, actual goombah, standing in the doorway of a warehouse full of cacao pods that smelled like paradise. Carolina picked me up in her pickup truck and we whizzed around the deserted Sunday port, slaloming through stacks of containers until we got to the Mary Whalen's pier. There are acres upon acres of open waterfront space here with the greatest views of lower Manhattan imaginable, and now that this neighborhood has gone from being one big crack bodega to the home of the latest gourmet Fairway supermarket, the developers must be salivating and scheming and hoping the last remnants of New York City shipping would just load up and steam off into the sunset. 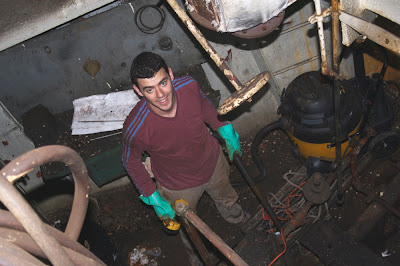 The Mary Whalen began life in 1938 as a local gasoline tanker and was eventually converted to haul loads of diesel fuel throughout the harbor. The Captain's cabin still has original mahogany trim and the former oil storage holds will hopefully soon become a maritime museum but she's pretty humble. Which may be the point. We set to work offloading the winter trappings, mostly coal and firewood and the woodstoves that had made the ship bearable to work on over the winter. I coiled some vast ropes in piles on a shady corner of the steel deck, where the summer sun shouldn't batter their uv-sensitive strands. We moved some mattresses. We considered what to order for lunch.

At last another volunteer arrived, Jim Clark, an Alaskan fisherman who recently moved to Red Hook. We had barely been introduced before he clambered down a long ladder into one of the Mary Whalen's innumerable gunk-filled foredeck caverns, carrying a shop-vac and a submersible pump. Shortly waste-water began spurting out of a tube and running along the decks, but Jim himself was never seen again. I assisted Carolina by hauling buckets of rust-sludge out of another hatch. She did the dirty work, sweating below decks, shoveling pounds of what was literally the oxidized inner wall of the ship into white plastic buckets donated by yet another Red Hook fixture, Steve's Key Lime Pies. Once these buckets had held some ingredient of his delicious desserts; we filled them with vile metallic goo that smelled like foetid cheese, and lined them up along the starboard side for disposal. After a dozen buckets or so of this I stuck my head down into the overripe compartment and yelled to Carolina, some twenty feet below, that I had better be getting along; I needed to return to the ongoing flooring emergency back on Coffey St. It wasn't quite an Amish barn-raising, but it was a morning that offered up the hope that Red Hook's community spirit, its old-school neighborhoodyness, so exceptional in the heart of the city, may actually be surviving the real-estate feeding frenzy snapping at its shores. 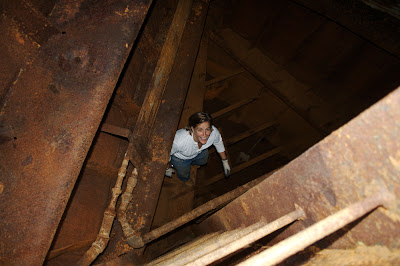 Carolina even further down in the belly of the beast. The small intestine of the beast, as it were. Today's task: shoveling out countless buckets of rust-sludge 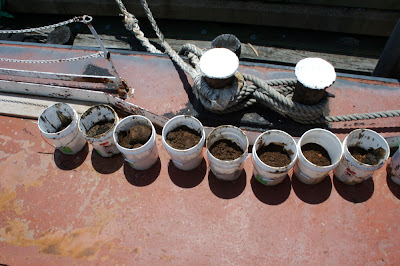 Eight of the countless buckets... 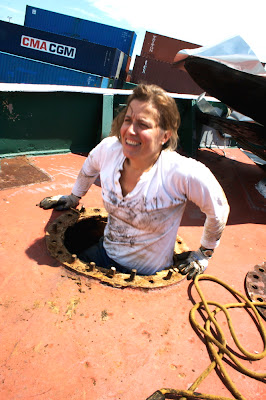 I warned Carolina not to wear this crisp white Armani henley for such a foul task, but she wouldn't listen 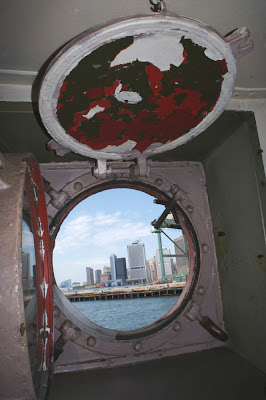 Still scrambling to catch up on donflan's deathless prose and pix following my own adventures on the Camino ... ever your M

These articles are fantastic; the information you show us is interesting for everybody and is really good written. It’s just great!! Do you want to know something more? Read it...:Great investment opportunity in Costa Rica: condo costa estate real rica, condo costa rica, condos for sale in costa rica. Visit us for more info at: http://www.jaco-bay.com/

Costa Rica is a country with a extremely sense of freedom. The landscapes are for much the most green in whole center america.The chances of investement are way to high, the average of Americans, European and people of the entire planet who is buying here is up in the sky !!! The best investment opportunity in Costa Rica: costa rica real estate, real estate beach,costa rica condos. Visit us for more information at: http://www.costa-ricarealestate.com

A lot of people ask me how I like living in Costa Rica. My answer is, it was the best decision that I made in my life. I came to Costa Rica 7 years ago on a vacation and quickly fell in love with the beauty of the country and the hospitality of the people here. I couldn't wait to come back. I started coming here about 4 times per year and always had a great time and didn't want to leave. Two years ago, I decided to leave Arizona and come live in Paradise. I can not tell you how happy I am that I made that decision. Today, I wake up next to the ocean and run on the beach every morning. I eat the most delicious fruits, vegetables and fresh seafood. My stress levels are much lower than when I was living in the States and the potential here for investing, truly is unlimited. The best part of living here is showing our clients this country. I really don't feel like I have a job for the first time in my life. The joy I receive when I see the look on people's faces when they get into the warm water of the Pacific ocean is truly priceless. For those of you that have come and discovered paradise, you know what I am talking about. For those of you that are on the way, I can't wait to get you here. And to those who are thinking about Costa Rica, please do yourself a favor and come down. You will have the time of your life.


We invite you to take a tour on our website, and if should more information is required:

I have to say that after all the breathless prose left here by my faithful Central American readers I am really looking forward to my UPCOMING MOVE to COSTA RICA!!! I'm convinced. Everyone tells me the beaches are spectacular, and as far as employment, why, jobs are EASY to come by. It will be wonderful to have a job again-- in fact I can hardly wait to be sitting in my new condo, with obstructed, distant views of the Pacific Ocean, spending 70 or 80 hours a week of my time crouched behind a computer screen writing endless comments on the blogs of others telling them all about just how wonderful my new life in COSTA RICA is!

What is this? Some kind of a cult?