Last night we had our "wrap party" for the current video shoot in Rwanda. It was our sixth such "last supper," and over dinner we joked that had Anne known how many times she would be here on the current film she could have constructed a mud-brick McMansion years ago on the hillside and saved herself a pile of money and many hours of commuting. The village in which we work is two hours from Kigali, where we stay in luxury at the Novotel Umubano. The tradeoff for being able to take showers in comfortable hotel rooms looking out over a swimming pool, and having a reliable source of electricity for plugging in battery chargers, watching the day's videotape and downloading digital audio to hard drives, is that we do a lot of driving on horrific dirt roads. (Anyone who thinks that Anne and I can't do without our creature comforts, however, should go back and read some of my posts from October and November of last year, when the two of us were living in subzero conditions in tents in the Dry Valleys of Antarctica). Leaving at 6AM is a grim enough prospect, and one that only gets us up into the hills by about 8, which is practically mid-morning in rural Africa. The result is that over various trips we've only once really managed to see the village waking up, and that required leaving Kigali in the middle of the night.

I wanted to record the sounds of the village at dawn, and so on the last night of shooting I convinced James Gakwerere to spend the night with me in what passes for the village square. James is the best cameraman in Rwanda, and he has been working with us for years, whenever he can get time off from his job at Rwanda Television. Much hilarity ensued. 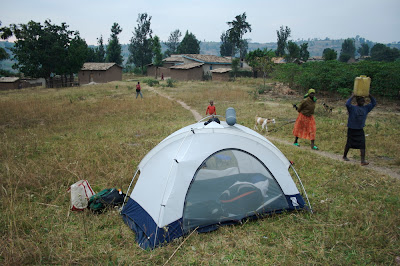 The trusty tent set up on the village green. While actually putting it up we had a fascinated crowd of about thirty villagers gathered around. "I can't believe he can fit his whole house in that little bag" and "it looks like a voiture with no wheels" were two of my favorites of the remarks James translated. They questioned whether I would fit in it, so I jumped in and lay down to demonstrate, to a chorus of guffaws. 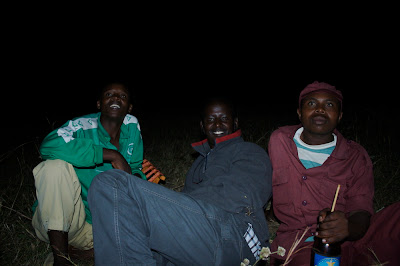 Jean-Paul, one of our regular interviewees, lounges after dusk with James and, in burgundy fatigues, the local civil defense. Civil defense are dudes given training and arms, and they patrol day and night to keep the peace. Someone in the village decided we and our crazy muzungu toys probably ought to have protection, and so this guy slept out on the grass beside our tent with his AK47, waking us frequently with a drunken, tubercular hacking cough. It's our fault, however, since we fueled him with several bottles of urugwagwa, the vile local pit-fermented banana brew he is seen drinking here out of an antique Primus beer bottle. 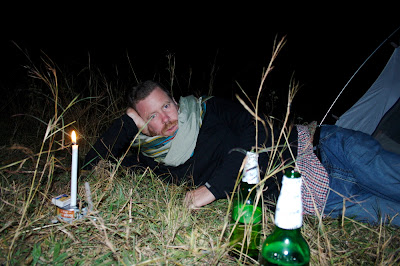 Lounging tentside.... Ouch! That stalk of hay stabbing me in the eye is the price I paid for trying to look sultry. We wanted our own beer, of the non-banana variety, so we conscripted my young friend Jacques, an-eight-year-old with excellent bicycling skills, to ride off into the night and fetch us these two bottles of warm Mützig. He was gone for ages and had to get them from a cabaret on the crest of the next hill, which tells you something about the local economy. Photo: James Gakwerere 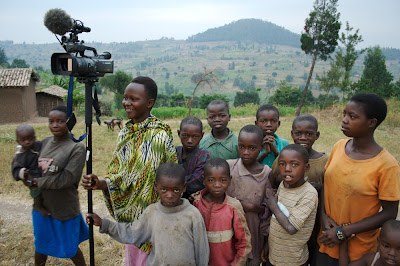 Kindly send me Jame's contacts. He is my long lost friend.