Does anyone else find this unsettling? 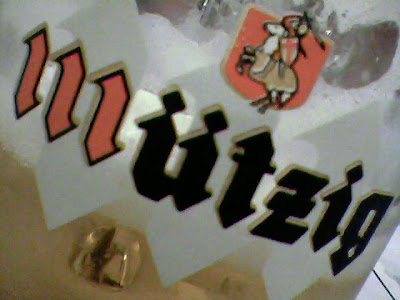 I'm referring to the teutonic font complete with umlaut, the high impact red and black graphics, the marauding crusader flaunting the cross of St. George on his shield, his sword of wrath held high as he rears back on his horse, preparing to trample unwashed heathens and infidels under his white steed's hooves of justice and righteousness.

It might just be time for a rebranding campaign, as nobody seems to have thought about changing the label on Rwanda's favorite beer since the country was a German colony, way back before World War One. The beer is French in origin, from the town of Mützig in Alsace, that part of the Franco-German borderlands that seems to be continually confused as to whether it is in France, or part of Germany. Today, apparently, Heineken owns the brand. 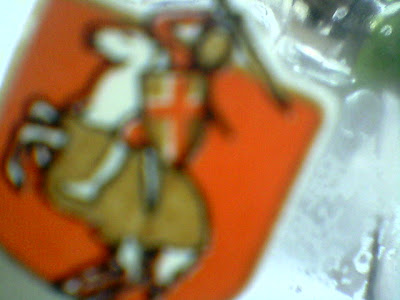 But no, my American friend. zis is ze vay ve make zem drink!

I have a correspondent who NEEDSto see this particular blog. Will be in touch

That is an image of a Teutonic Knight, a member of one of the late medieval military-religious orders. They fought mainly in the Baltic regions. Chaucer's knight had fought at their side:

are you saying his intention is not to trample the infidels?

I also want to add that the eminent Chaucerian may not be aware that, regardless of who carried it into battle where, the Cross of St. George has in recent decades become the Confederate Flag of Britain. It is today most often seen being waved by skinheads and neo-nazi football hooligans at matches the length and breadth of europe.