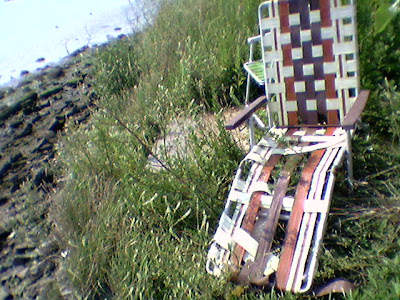 When it comes to vagrants and rarities in New York, I'm like cancer, a man with the plague. It has almost come to the point where I don't even call the New York Rare Bird Alert (212-979-3070) any more because I don't want to be a spoiler; you can pretty much bet solid money that if I go chasing after some accidental bird that has washed up unexpectedly in the New York area, no matter how long it has been hanging around, that will be the end of it. I won't see it, and what's more, it will never be seen again. The last record of it will have been the day before, or even that morning, and once I set out for it, as if it knows I am coming, it's gone, forever. 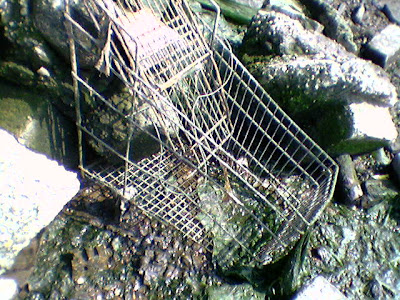 I don't take it personally. At this point I'm rather amused by the consistency and infallibility of it all, to be honest. But thank God I don't really fraternize with the local birding community, otherwise they would have caught on and would have already stopped by and snuffed me out, to prevent my chasing off their rare birds.

There was the Boreal Owl in Central Park a winter or two ago. Been there for months, hanging out in the top of one particular evergreen tree not far from the Dakota, sniping mice at Tavern on the Green [Update: See "Comments"]. I was out of town when it arrived, or didn't hear about it right away, but since I would (still) love to see a Boreal Owl, I drag-assed up there at dawn one day as soon as I heard tell of it. After all, this little beast only rarely makes it south of the vast conifer belt crossing east to west through the middle latitudes of Canada, for which it is named.

Needless to say, the owl wasn't there on its customary perch. At the foot of the tree was a sportive gentleman with flowing white facial hair and binoculars, "gripping off" the arrivistes with exciting tales of how splendidly the bird had "been showing" the day before, and the day before that. He had apparently been studying the specimen at his leisure for some weeks. "I'm sure it's still around here somewhere," he said, airily. "It's just a matter of re-finding it." Hah. Never seen again.

On another occasion I got onto the news of a Broad-Billed Sandpiper, a minute wading bird that breeds in Siberia and generally migrates down through Japan and the Philippines to Australia, a little late. This is a major rarity in New York, or anywhere in the USA, for that matter, and I only found out about it after scads of people had been seeing it daily in the West Pond at Jamaica Bay National Wildlife Refuge for something like a week. I called my main man Joseph, who could care less about waders but is always up for a bizarre sociological phenomenon, and inspired him to take the afternoon off and drive out there with me. The power birders with the frequent flier miles had mostly already seen the bird, which was only about two miles as the sandpiper flies from JFK. But the broke ones were arriving by car, from Maryland, Tennessee, Ontario, Florida, and so on, after getting the gas money together, having another bird-war with the wife, and calling in sick to the job. The parking lot was full of forlorn birders and out-of-state plates. What should I have said? Should I have jumped up and down yelling "sorry, it's my fault!" I don't think so. As Joseph and I made our way through the clusters of disconsolate telescope-toting mooks wandering aimlessly around, I tried not to look guilty.

I dipped on the Long Island Harris' Sparrow and the Smith's Longspur at Jones Beach as well. 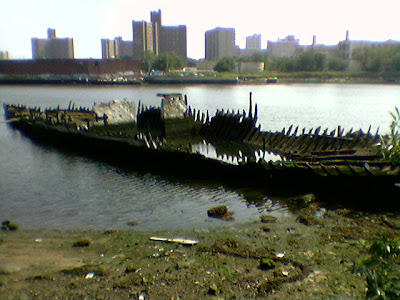 One never wants to completely give up hope, however, and so, in an idle moment on the way back from the airport after coming home from Rwanda, I gave the old hot-line a call. In my absence a Western Reef Heron, the first record of the species for New York State, had taken up residence in a Brooklyn body of water I had never even heard of, the Coney Island Creek. I knew exactly where it was, though, because the instructions on the tape-recording suggested parking in the lot of the Coney Island Home Depot. Since I'm going into the fifth year of a career-long house renovation, I'm familiar with every Home Depot in Brooklyn and Queens. 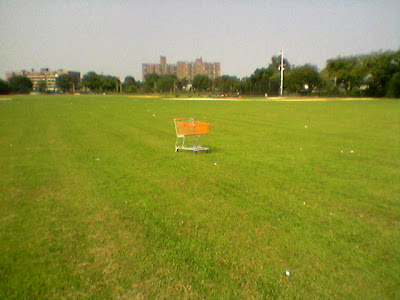 This is not a bird I would generally drop everything and rush off to see, as I added it to the life list in Dubai a couple of years ago, and apparently the last time this particular individual had been spotted I was still chasing chimpanzees in the Nyungwe Forest in Rwanda, so it seemed like a long-gone long shot. But I was out reuning with the family down in Princeton on Thursday, and as the Rare Bird Alert is updated on Fridays I gave another little jingle as I was rolling back up the Turnpike on Friday afternoon. The Reef Heron was back, and had been seen Thursday morning, the very day before! I had seen one last year in Ghana, which is about as close as it should normally ever get to New York, but I didn't have it yet for this year's epic and growing year list (816, by the way, stop drooling with jealousy), and I was going over the Verrazano Narrows Bridge anyway, which is only a short Belt Parkway traffic jam away from Coney Island.... Since it had first been found all the way back on July 8th or so I figured anyone who would want to had probably had a chance to see it already anyway, so why not give it a shot, even if "the curse" were to chase it definitively away. 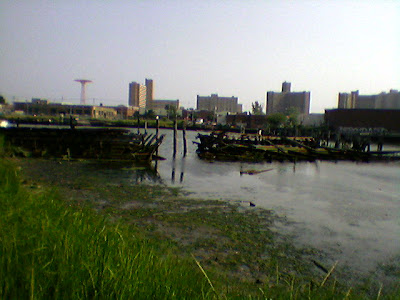 Upon arriving one can only think: boy, is this a hole. Coney Island Creek is the sort of scummy disused New York City waterfront that people are referring to when they complain about the neglect we have heaped on our former maritime glory. No "greenway" bike paths here, just rats skittling across rotten pilings, a beach of green sludge impregnated with abandoned truck tires and half submerged shopping carts, and everywhere the skeletal rib-cages of vast, long-abandoned barges. Graffiti, fat men in wife-beaters fishing for toxic fish: it is the sort of place where, stumbling through the weeds to view the water's edge, one expects at any moment to surprise a party of crack-smokers, or worse. And that was what I thought even before I read this. 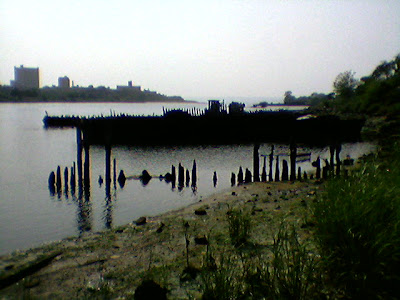 Looking around at this desolate post-industrial wasteland I really had to wonder what sort of dedicated nut-job birder would have ever come down here to go birding in the first place. The next thought was how improbable it was that any self-respecting bird would eat anything swimming here. However, there was a Great Egret marching through the muck, and many fishermen, so the waters must be capable of sustaining some form of life. The sonorous tones of the recorded voice on the hotline had warned that the Western Reef Heron was easy to overlook as it skulked about the abandoned barges, of which there seemed to be an inexhaustible supply. Most of these were viciously backlit by the afternoon glare and stranded beyond a moat of foul muddy sludge. Some were far away on the opposite shore and would require a telescope for effective viewing. I had none. There was nothing about the dismal scene to suggest that I had any chance whatsoever of ending my losing streak of rarity-seeking outings. 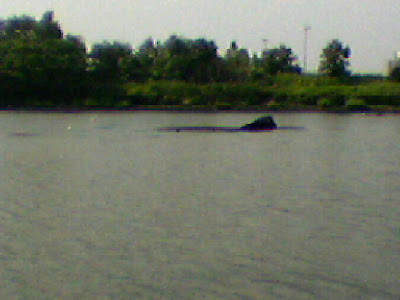 There is a Western Reef Heron in this picture; the tiny black dot to the left of the bigger black triangular lump of rusting boat that looks like a shark's fin. I shot all the pictures for this post with my cellphone, not only because I forgot to bring a decent camera, but because they look so much more ghetto this way. If you want to see what this Western Reef Heron actually looks like, go here.

Working my way around the squalid shore I flushed a few shorebirds (a complete list of species from my brief outing to Coney Island Creek is in the comments) and saw a Black Crowned Night Heron flying across the creek and into a sheltered cove, where, in fact, numerous egrets and herons were patrolling the flats. Among the six Great Egrets were two Snowys, three night herons and a dark, almost black, slate-colored heron with an exceptionally long and fine dagger-like bill. The closest thing we have in all the Americas to a heron with a bill like this is the Agami Heron, a permanent resident of densely forested wet tropical swamps that would be even less likely to wash up in Brooklyn than the Western Reef Heron, the bird I was definitively looking at. It was actively feeding, flying from one possible patch of fishery to another, and showing off its black legs and yellow feet. The curse was lifted!

The legal department for "Tavern on the Green, LLC" has contacted me to inform that there are not now, nor have there ever been, mice in, or about, their premises.

Here at antarcticiana we never retract, we only react, but I do have the good grace to point out that, since I never saw the Boreal Owl, I can hardly claim to have seen it eating mice anywhere in particular. We can only hope that this admission, which implies no guilt, and should not be taken to imply guilt, placates the $375-an-hour web-surfing marauders who represent that fine establishment.