Rocking gently back and forth on the placid waters of the inside harbor at Palma de Mallorca it is difficult to believe the terrifying forecasts typewritten on mimeographed sheets and posted on the message board at the Capitania, the marina HQ where slips are assigned, here at this vast yacht club of thousands of boats. I am surrounded by million-dollar hardware, the sun is shining, and the cormorants are lounging on the bow mooring lines, drying their feathers. But out there, according to the ominous posted reports, it is Force 7 on the Beaufort scale and the seas are savage and confused. 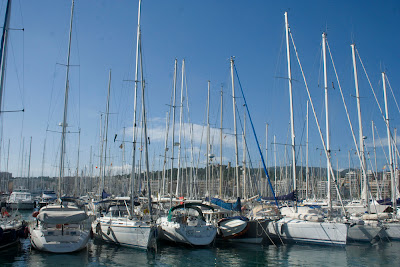 Although the medieval old city is spectacular, Palma de Mallorca's charms are limited to those one might imagine from an over-touristed yachting capital populated largely by twenty-something boat rats just in from one or another other sun-soaked leisure destination. Yesterday, to relieve the tedium of waiting for calmer seas, and to get away from the flip-flop stores and sunglasses boutiques, we drove out of town to the north-east, exploring some of the island's lesser traveled byways and villages. Some are very old. In Pollenca we climbed the famous 365 steps to the tiny chapel at the top. The three of us, Captain Jan, First Mate Kuba of Posnan, Poland, and myself, the vice-assistant deck-scrubber, all agreed that those tourists we found clambering out of their cars at the top were doomed and would go straight to hell. We went to Alcudia, another ancient port with narrow, canyon-like cobblestone streets fit only for pedestrians and Vespas. We ate apple cake. 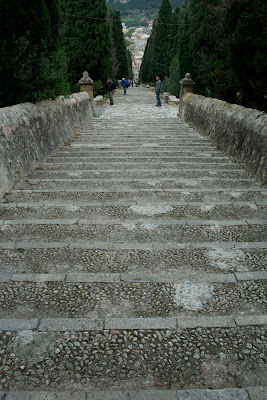 We drove onwards, to the Cap de Formentor, the northernmost peninsula of the island, on one of those heart-stoppingly winding Mediterranean roads that snake up and over crags and ridges with little regard for the precipitous cliffs around the corner. The Bay of Palma faces due south; the 35 knots of wind we were reading about on the wall of the Capitania were alleged to be coming from the north. Indeed, at the top of the north-facing cliffs there did seem to be a bit of a stiff breeze bending the tufts of sea-grass in our direction. Reaching the lighthouse, we parked and got out of the car, only to be almost blown back down the road. Up ahead, at the scenic overlook, I saw a man leaning at almost 45 degrees into the blast, resting his weight on the wind. 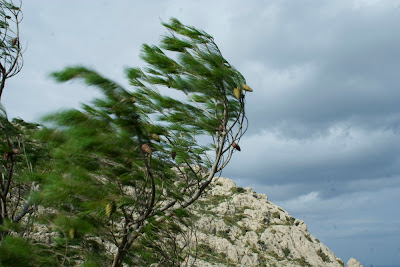 The sound was awesome, every blade of grass and branch of stunted shrub whistling and humming. Below, the sea was churning. Smashing into the rocks, it sent spumes of white surf far, far up into the air. Out on the water it was chaos, a confusion of waves from two directions making a vile sabre-toothed chop, with many meters separating the crests from the troughs. There was not a boat to be seen anywhere. 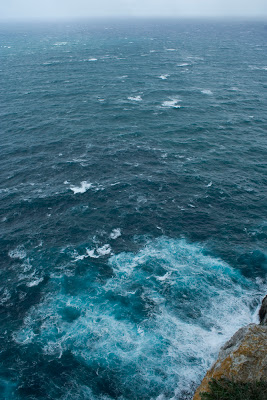 Having gone rather pale at the sight, I turned to Jan. With as much cheer as I could muster I said "at least now we know it was not such a bad idea to hang around for a few extra days. I wouldn't want to be out in that." This was such an understatement that it verged on dishonest.

"I thought you might enjoy having a look," he said, "I thought over the past couple of days perhaps I had seen some doubt and disappointment on your face."

I was certain I had not protested our decision not to sail; now, having seen the raging sea, I considered demanding that I be driven straight to the airport to await the blissful safety of the first possible discount flight back to Paris.

Sensing my terror, perhaps, Jan proposed that we stop by the enormo-market in Palma on the way back to the hotel, to purchase provisions. It proved to be an excellent psychological tactic. In the security and comfort of the welcoming and familiar shopping experience, with its long American-style aisles of countless goods, its rows of hams and sausages, acres of pickles, teabags and countless Spanish cheeses, biscuits, granola and potato chips, I felt my fear slipping away as I fondled heads of lettuce. It really made one quite hungry, all this shopping. What a tragedy it would be not to stick around and eat all this stuff, so carefully selected. I think I'll give it another day and see if we don't sail tomorrow....

Meanwhile, back here in gay Paree, the winds are calm, overcast, visibility at least to the top of the Eiffel Tower.

So you're stuck in the last German colony. Check out Ballerman 6, where German alcoholics make Cancun frat parties look like distinguished meetings of Lords and Dames. In the meantime - all quiet on the Munich front, where we're still kept in a holding pattern. Ah, the tension and excitment.

Time to come back to Bac!