The northern tip of the Jamaica Bay Wildlife Refuge, in Queens, at the southern tip of the bridge that brings Cross Bay Boulevard traffic from Howard Beach out to the Rockaways, is a sandy spit dedicated to public recreation. A couple of parking lots, some wind-whipped pine trees, and the odd fishermen walking the rocky bayside coastline seem an improbable scene for a major Hindu religious ceremony. Howard Beach, on the far side of the bridge, is a firmly working class white enclave, an Italian stronghold still notorious for, and perhaps even synonymous with, urban racial intolerance. Further south, the bizarre bay-island community of Broad Channel is little different. Said to be the home of a great density of New York City policeman and firemen, its postage-stamp front gardens are exuberantly and permanently decorated with scenes of dancing gnomes and other outdoors kitsch.

But the refuse scattered along the tideline here tells a different story. There is simply too much of it; worshippers, and many of them, have come here to make offerings. I sent some images to my brother's girlfriend, Melanie Dean, who is currently doing her field work in Tamil-speaking south India. She writes:

From the looks of the photos I would say there was some sort of procession related to Shiva and some sort of ritual bathing in the ocean took place. When people do these baths in the ocean/rivers to cleanse themselves of ritual pollution they often leave all their old clothing behind in the water and on the shore. I went to a river in Tamil Nadu recently where everyone goes to bathe 30 days after a family member dies and the banks were covered with discarded clothing. (One of your pictures) is of a discarded sari. (Another) is of the goddess Durga, but one is the god Shiva and another is a big Shiva lingam. The Shiva lingam is an aniconic representation of Shiva and is basically a penis sitting in a vagina (but most worshippers don't think of it this way when they are praying to it!). Shiva meditated in a cremation ground and was an ascetic, so he is often represented in lingam form - especially in the South.

Probably this group of people did an immersion of some idol in the water there and this is what is left behind. My guess is that this is trash that is several months old and probably from Durga Puja which was in late October or early November. This is a pretty impressive puja that people in Calcutta do up really big. They immerse humongous idols of the Goddess Durga in the ocean.

One possible problem. These photographs were taken in early January, and unless the tidal action is remarkably gentle, and the fabrics extraordinarily resilient, I would if pressed find it difficult to believe that these relics are two or three months old. Bathing, whether ritual or otherwise would have been a most chilling experience since, one would imagine, at least late September. Any further illumination readers might leave in the comments would be most appreciated. 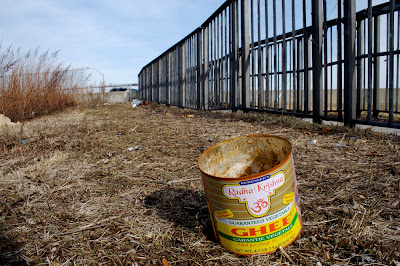 An empty can of Ghee, well above the high-tide line. 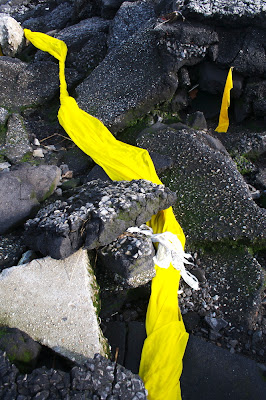 Countless yardage of saffron fabric, some decorated with tassels and sequins, lie twisted and tangled amongst the slimy rocks 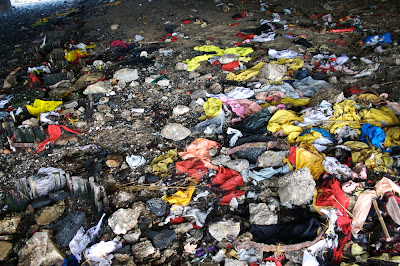 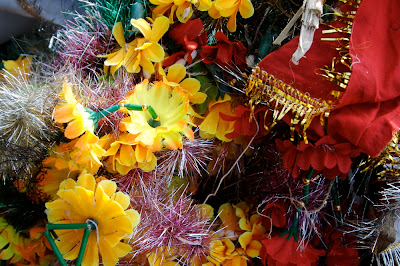 Could this refuse possibly be several months old? 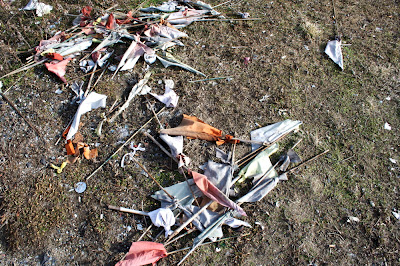 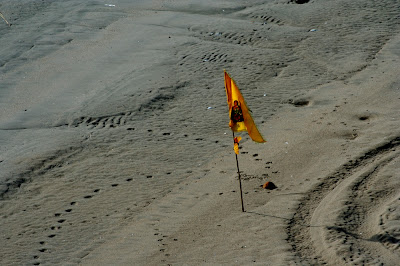 Across the water, on the Howard Beach side, a flag, still stuck firmly in the sand. Perhaps it was replanted by a passerby. 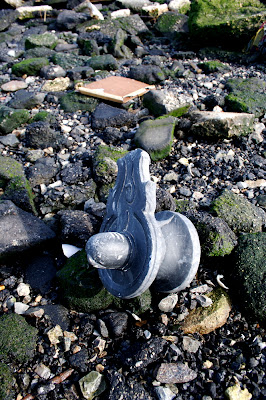 A lingam for your admiration 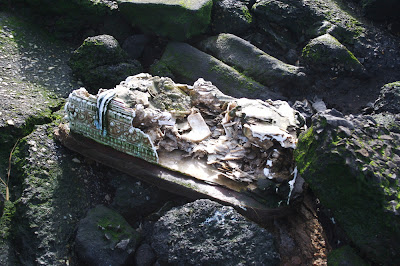 A shattered wedding cake? To the north of nearby JFK airport is Richmond Hill, the largest Guyanan enclave in New York, home to thousands of both afro and indo-Guyanese expats. Among the indo-Guyanese are many hindus. Could this Guyanese population, descendants of indentured workers imported from India in the 19th century, be involved? 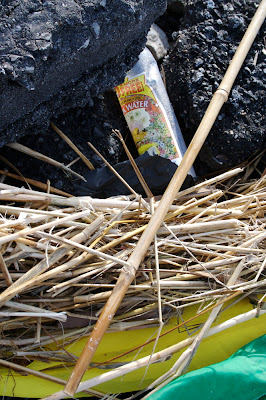 The ever-popular Florida Water, once a cheap cologne, now an indispensable ritual perfume from Haitian vodoun all the way to hinduism

There was also Florida water in the Peruvian-Amazonian ayahuasca ceremony I participated in.

That's a spooky Hindu post-Rapture scene you stumbled on.