What are you doing here? 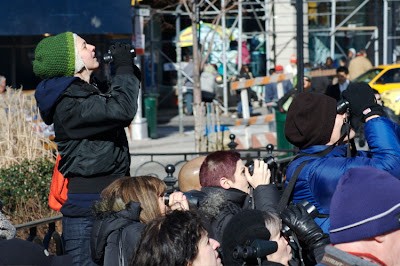 Looking off the back deck a couple of weeks ago, which is to say smack dab in the middle of January, I was shocked to spot cavorting in the neighbor's garden a spectacular male Baltimore Oriole. Brilliantly plumaged in orange and black, this bird is an occasional but never common springtime migrant through the grit of Red Hook. It is entirely unexpected in winter. Even the hardiest representatives of its clan should be found passing the season no further north than North Carolina. Global warming? Perhaps. 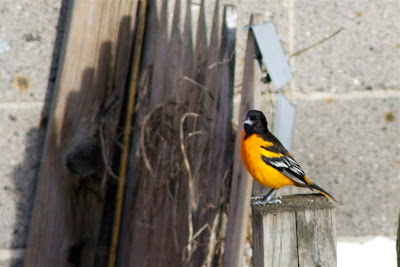 Unlikely winter visitor; in January it should be far to the south of Baltimore. (I know, my fence needs a little work; luckily spring will soon be upon us)

Then, this week's religious Friday telephone call to the New York Rare Bird alert, 212-979-3070, often transcribed on the web, brought exciting news of a putative first state record for Scott's Oriole, a yellower relative of the Baltimore. This particular individual is so confused we can scarcely blame climate change; it normally resides in the south-western deserts of New Mexico and Arizona. Having arrived somewhat addled in the New York area, its motives unknown, this bird, a first year male, apparently confused Union Square Park with the arid bluffs and canyonlands of its place of birth, taking up residence amongst the starlings, pigeons and restauranteurs. 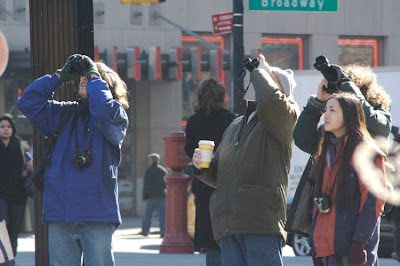 That thing must be around here somewhere

Once having established that the famous Union Square Greenmarket does indeed operate on Fridays, so that we would be able to purchase organic vegetables and local grassfed beef between bouts of ornithology, therefore metaphorically killing two birds with one stone, we set off for the city in an adrenaline rush. As I've noted before in these pages, it has historically been the kiss of death whenever I go on one of these local rarity hunts, as my presence all but guarantees the permanent disappearance of the sought-after specie. But last August, that curse was lifted. 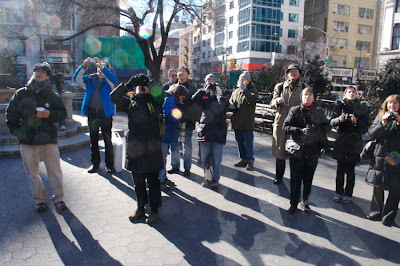 "What are all you people looking at?" was the most common question innocent passersby asked of the entranced cult of birders

At the southwestern corner of the park, already known, the scuttlebutt had it, as the preferred hangout for the oriole, clumps of binocular-toting birdos stood chatting, but without intensity. There was none of the unified, focussed pointing of high caliber optics that indicates, even from far off, that the bird has been spotted and is under observation. We abandoned this placid scene, delving into the denser foliage at the heart of the urban square, tripping over tourists and pushing old ladies out of the way. Still no bird. 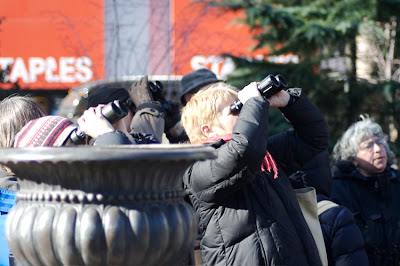 The scene in front of Staples, Union Square, last Friday

We forged on, undeterred by the winos and businessmen braving the cold to slurp lunch-time soup on park benches. There, up ahead, half-way to the greenmarket where the organic turnips were waiting, about even with 16th st., stood another dense knot of birders. This time all had their binoculars clamped to their faces in an almost military synchrony. Necks cocked back as one, the group was staring skyward into a tree, eying a dismal, yellow feathered blob. Scott's Oriole! Or at least so they are saying. Hunched over amongst the backlit twigs at the top of a tall tree, it was impossible to say for sure. It was a yellow and black bird, that was certain. 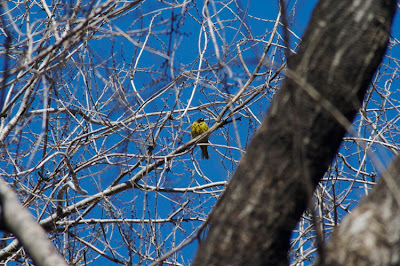 Dude, I came all the way from Brooklyn, do you mind coming down out of that tree?

No wonder, perhaps, that this alien visitor, adrift in the great city, was almost ignored for more than a month. First seen in early December, it was misidentified for weeks as an Orchard Oriole, a regular summer visitor to the north-east. Although even less likely to be seen in New York in January than my Baltimore, the sighting of a winter Orchard Oriole was not so fabulously thrilling that this bird received sufficient attention for its true identity to be revealed. Perhaps it spent some time hidden in the confines of the elitest, private and key-protected Gramercy Park, just uptown, or perhaps those who visited it were happy to call it an Orchard and move on. In any event it was only last week that expert examination of photographs finally inspired a horde of birding visitors to visit Union Square.

One of the great things about life in New York is that the same guy who will walk by Madonna or George Clooney on the sidewalks of lower Broadway without batting an eye happily leaps into action as a kind of self-anointed tour guide to such obscure events as the appearance of a vagrant Oriole in a city park, marshaling foot traffic and giving the newcomers the latest updates. How else to account for a friendly binocularless man in an enormous orange parka, altogether unfamiliar with the unwritten etiquette of the bird-obsessed, simply swept away in the communal excitement, jumping up and down, gesturing to the crowd that he had found a superior vantage point? And the curious, who perhaps had never shown any interest in a bird before in all their city lives, amazed to see so many freakish and apparently unemployed citizens pointing their expensive optics at a bland dot in a tree, and therefore waiting around, chatting, learning about the weird ways of the bird folk and hoping like the rest of us that the bird would come lower in the trees to offer a view worth telling friends and family about later in the day: the story of meeting the birders incomplete without the punchline of getting a good look at the bird. 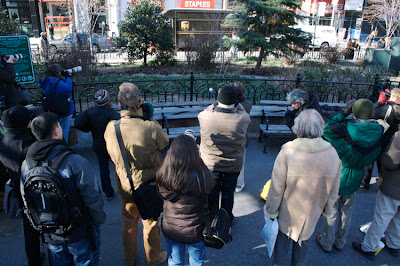 March of the zombies? Or the Scott's Oriole (2858), finally on the ground, offering crippling looks?

At last, following, it seemed, a swirl of Starlings, the Oriole took flight in the direction of its beloved southwest. Rushing back towards the intersection of University and 14th St., we arrived at the favored corner in time to find the bird pecking away at some mandarin segments thoughtfully left on the ground in a tiny fenced off corner of the park, just across the street from the Staples superstore. Perhaps not everyone's idea of a wilderness experience, but very satisfying all the same. 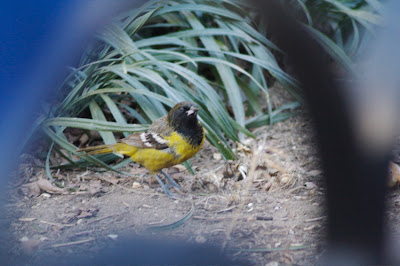 Note the dark face with almost black cheeks and the olive-streaked quality to the upper back, both important field marks. This bird was apparently first spotted in early December and was only conclusively identified this week. Superior images are here.

I could swear I have seen the oriole here in a previous year, just didn't know what it was.

Speaking of obsessive treasure hunts, please think of me next time you open the NY vinyl vaults :)