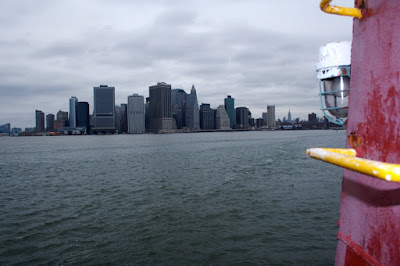 Some weeks ago I got an email from Carolina Salguero informing me that she was hoping to resurrect her once-excellent but lately dormant blog about efforts to refurbish the Mary Whalen, the 172 foot long rust-bucket of a tanker that she has adopted like a stray kitten. She mentioned that she would momentarily be moving the Mary Whalen from her most recent home in the Red Hook container port, to a new, but also temporary berth in the Brooklyn Navy Yard, that vast pocket of crumbling industry wedged between Williamsburg and Vinegar Hill. "Ooh," I said. "I'd love to come along on that journey."

Weeks passed, and when I did think of Carolina and the Mary Whalen I was forced to conclude that I had been forgotten. I was sure I had literally missed the boat. Then, last week, to the in-box came the message that the much-postponed towing of the Whalen to her new home was to happen on Sunday. What's more, in recognition and thanks for the many countless hours of voluntary toil that friends of the Mary Whalen had put in, scraping up buckets of rust chips, we were all invited to voyage on her decks as she traveled to her new home.

In my case this was a bit of a charade, since the sum total of my work aboard amounted to a couple of hours of painless schlepping, many months ago, on a warm and sunny day at the end of spring. After that morning I managed to let an entire summer and fall season of volunteer days slide by without another visit.

Last Sunday was a chilly one, but we try never to let an opportunity to get out onto the waters of New York harbor go unseized, so, bundled up and fortified with bagels, we trudged down Van Brunt street to the container port. 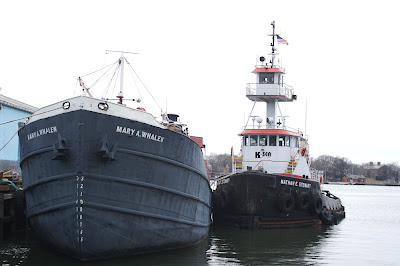 The tug Nathan Stewart, lashed tight to the Mary Whalen in the container port. 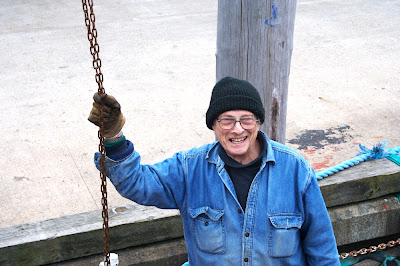 The irrepressible John Weaver prepares to hoist the gangway on deck. In every picture in which Weaver appears he wears this broad, warm grin, perhaps delighting in the fact that, even if only under tug power, the Mary Whalen is once again setting out to sea. In a moment of idle Googling, Weaver and his wife, the daughter of a long-serving captain of the Mary Whalen back in her days of active duty, discovered Carolina and her attempts to save the ship. Since then he has become deeply involved in the project. 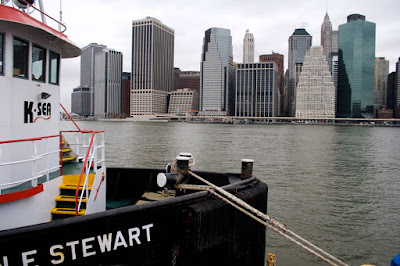 Under way at last, lower Manhattan sliding by on the port side. 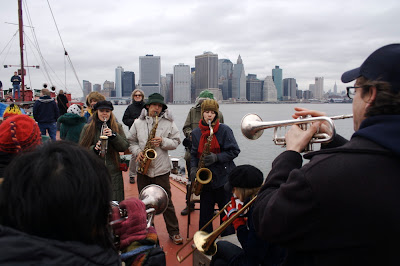 In a particularly inspired moment, Carolina contracted with a motley crew of musicians known as the Hungry March Band to provide a live soundtrack, as it were, for the move. As the ship prepared to get under way, the musicians got themselves ready to play, strapping on portable drums, lounging on the decks with trombones and firing sample volleys from trumpets. Most had never been on board before, and some had tremendous difficulty finding the ship, hidden away deep inside the vast container port. At the very last moment a Japanese player arrived, rushing up the gangplank just before it was hauled on to the deck and, half out of breath, whipped out his saxophone. Their music sounds like a military band gone to seed, or even to pot, or perhaps an impromptu jam session turned parade, and it lent a glorious aspect of triumph and conquest to our outing. It was cold out on the water, and the music kept our spirits up. I thought of the Russians on the eastern front, and how cheered they might have been to have the Hungry Marchers urging them on. They reminded me, too, of the weirdly joyful clash of instruments I once heard accompanying a funeral procession in rural Haiti, and when I asked one of the band what other sorts of gigs they play besides ship relocations she said "all kinds, really; recently we played a New Orleans style funeral on the Upper East Side." 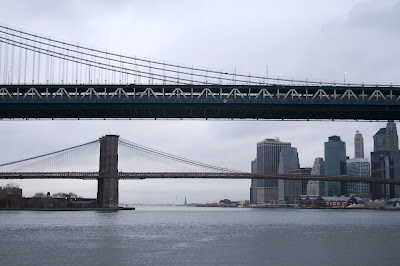 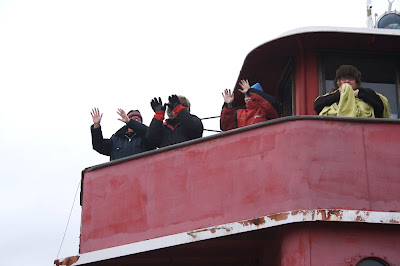 Raise the Roof! As the wicked winds of winter came whistling in over the waves, many danced to stave off the chill, shaking their groove things to the funky brass band sounds of the Hungry March Band. 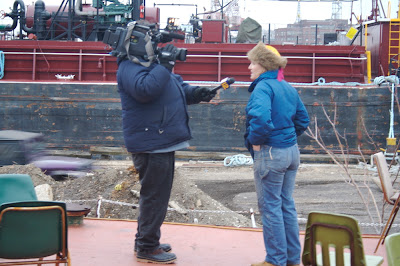 I counted at least six video cameras on board filming the historic event, from the palm-sized to the professional. It is starting to feel as though everyone is making a documentary about something. However, despite all the cameras, there were no working soundmen participating in this media frenzy, which may explain why I don't have any gigs at the moment. This dude, from Channel 12, was doing his own sound the hard way. I would have thought having to hold a hand mic for the interview you are filming would seriously limit your ability to choose and hold a nice frame. In the business, this is known as the "one-man band," or "one-man banding it," and we sound brethren frown on this sort of behavior, for obvious reasons. I'm going to complain to my union, if I can get anyone on the phone over there. 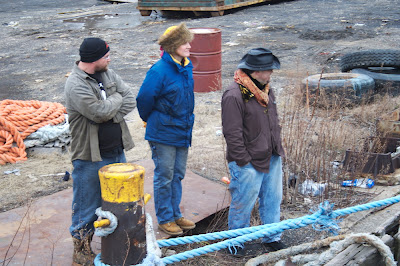 Carolina, wearing some sort of Uzbeki yak-herders hat, supervises the docking from her new front yard.

Home, sweet ghetto. The new digs in the Brooklyn Navy Yard seemed a bit on the decrepit side, after the immaculate stacks of containers and tidy blue warehouses of the container port. But it is only temporary. So far, the next stop is unknown, TBD. Do you have a home for the Mary Whalen? An underused two hundred feet of New York City waterfront is all that's needed. All suggestions are welcome. If you see something, say something!

Adieu Red Hook: The Mary Whalen at her new berth in the Navy Yard. I know this picture looks as if it had been taken from on board the tug as it heads back south, the day's work done, but that would only be possible if the Nathan Stewart had kindly offered us a lift back to the neighborhood, which they couldn't have, because their insurance and other policies wouldn't permit it. So, in short, I have no idea how this picture came into existence.

A great recap of the latest adventures of the Mary Whalen and her tireless leader, my sister Carolina. Very entertaining. Love the pictures. Thank you.