After enjoying the overwhelming hospitality of Atlanta for a long weekend of art openings and book reading, Laura and I hit the road. We were looking forward to a slow and relaxed three days of tropical camping along the sultry gulf shores, en route to New Orleans. Back-roading it, we headed for the Eufaula National Wildlife Refuge, on Alabama's easternmost edge. At a viewing platform overlooking distant flooded fields dotted with gabbling waterfowl, we gobbled sandwiches under the grey and wintry luncheon sky, noting the unseasonable chill in the air. Not to fear, we thought; there will be many more miles of driving south and sunward, before we pitch our tent in the balmy Caribbean breezes.

At Opp, just above the Florida panhandle, we sought out the Frank Jackson State Park campground. Signs warned of alligators, but not of the weather. After choosing a campsite, we drove back into town. Opp seems to have once stood for "opportunity," but perhaps the town lost the rest of its letters when it was discovered that, to be honest, there were few opportunities to be had there. The only supermarket was a squalid, discount affair clogged with cut rate corn syrup and nonperishable items made from refined flour. It was as dismal a shopping experience as capitalism has to offer. Settling for couple of packages of ramen, we drove back to Frank Jackson, discovering that with nightfall, and in our brief absence, the wind had begun to blow, hard, directly off of the lake and towards our campsite. The advertised alligators all seemed to be safely hibernating. Worse, had the wind not been churning the surface of the water into a series of choppy, standing waves, it was cold enough outside that the lake would certainly have frozen. 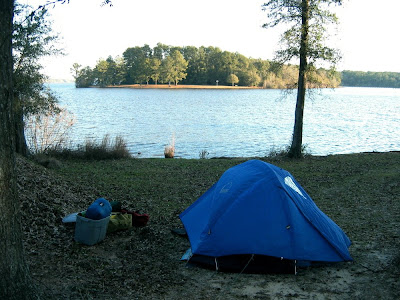 Much colder than it looks

Pulling on the skimpy windbreaker I had packed "just in case," I set to getting the tent up. Soon my fingers were as frigid and chilly as the cold aluminum tent poles. The wind was so violent that the stove would not even light, until Laura, freshly returned from a visit to the toilet block--"wonderfully heated, unlimited hot water, you really ought to try it sometime"--suggested putting it deep under the camper top of the pickup. Stomping our feet, we took our mugs of instant noodles back into the cab, where we had been sitting all day, driving and "looking forward to parking this thing and getting out into nature."

Outside, the wind was whipping the rainfly of the tent, and I watched it anxiously from inside the car, fearful that the whole mess might blow away. I had faith however, in my staking skills, learned in Antarctica while preparing to head out to camp at Mt. Boreas. After checking the stakes I gloated to Laura that the tent was as safe as a house. All plans for an evening stroll were abandoned, and with the temperatures in the twenties, and the wind chill doubtless far lower, we bundled into the tent and battened down the zippers.

Dawn arrived, crisp and calm and frigid. "I'll make tea, while you take a hot shower," I announced, magnanimously. I put water on to boil and began stuffing the sleeping bags in their stuff sacks and taking apart the tent. My toes are chilly, I thought. Perhaps I'll start the car, let it warm up for our departure. Maybe I'll just sit in it, for a moment. 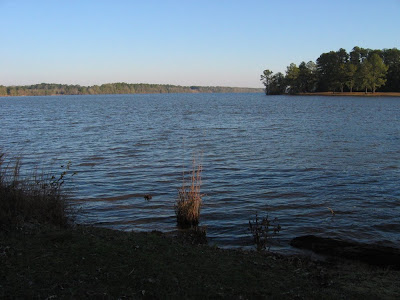 When Laura returned to the half-dismantled tent she found me sitting in the truck clutching a cup of jasmine tea, the heater blasting. "What's all this nonsense about Antarctica you are always spouting?" She asked, when I rolled the window open a tiny crack. "You're nothing but a big wimp."

You might like to know that it is sunny and nearly spring-like in New York this morning.