Antarcticiana's Zimbabwe correspondent is safely back in Harare after a hair-raising and homesickness-inspiring vacation abroad on various continents. The farcical business of life in the late Mugabe period continues, a total systemic collapse best illustrated, as usual, by the government's continued insistence on printing money faster than it can obtain paper. Soon, furthermore, there won't be enough room left on a standard bill for all the zeroes.

Only a few weeks ago the complete collection of Zimbabwean billion-dollar bills landed on my desk. Imagine our reporter's consternation and amazement (minimal, actually) to discover upon returning to the former breadbasket of Africa that the printing presses were already deep into the trillions. The latest currency report from the front lines of hyperinflation:

We now have the trillion series, The 10, 20, 50, and 100 trillion dollar notes. The trillions were basically printed to pay the military. The notes never made it into the bank and the soldiers were paid in barracks so they didn't have to stand in a queue or be seen to be taking over any queues. Later that day they were seen trying to convert their trillions into US$.

On the day the trillions were introduced, 16th January, the rate was 600 Billion Zim to US $1. 4 days later, on 21st January, the rate is 25 Trillion to US $1. The general public is still waiting to see the trillions in circulation. I have obtained one 10 Trillion dollar note, and when the others are worth nothing I will be able to buy them for $1 each. Notice the shortage of ink color choice. [These colors are identical to the billion-dollar notes and have the same "pile of rocks" graphic, ed.] Luckily there is no confusion as no one really accepts Zim dollars anyway. The problem now is how to pay military and civil servants next month. Coupons and South African Rand are being talked about.

If you add 13 zeroes to 100 trillion you get a reptilian. 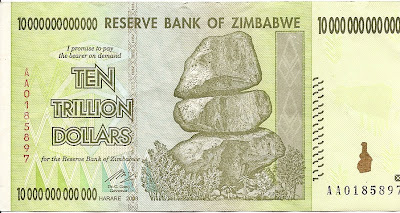 Meanwhile, functionaries have announced that passports will only be issued on an emergency basis, at a cost of $650 (US). The Harare Tribune reports that "an official at the passport office said the suspension in issuing of ordinary passports was due to shortage of material needed to make passports. 'There is no paper to print passports so we can only entertain emergency cases which give us foreign currency. The only way to give everyone passports would be to charge a flat fee in forex [hard currency], but that would embarass the government,' he said."

And what would embarrass this government, as my grandpappy used to say, would shame a hog to death.

If they switch to writing that huge number in scientific notation they could save some money.