Even after the most pleasant sea voyage there is a delicious anticipation associated with finally arriving in port. Awakening on the morning of our fourteenth day on the Indian Ocean, no land was in sight, but by lunchtime a plump, dark streak had appeared on the horizon, off the starboard bow. Land ho! A few hours later, in front of a city view of whitewashed cement and iron railings, we were in amongst the tankers lazing outside Mombasa, waiting for the port pilots to arrive and steer them in. Much of the crew came out then, to stand at the rails imagining the hidden delights of the city drifting before them. There was a palpable, mounting sense of anticipation as the ship was made fast to the quay. Rather than go out for the first night's carousing, however, we spent one last night on a ship almost devoid of other people, packing up our ten suitcases of film and sound equipment. Mombasa could wait until the next morning, we thought. It was a decision later to be regretted.

Let me in, please! The port of Mombasa

We were to be picked up shipside at eight in the morning, our way through customs eased by professionals who had driven down specially from Nairobi. Eagerly, we prepared the valises. At 8:02 the first telephone call. "Rather a bit more bureaucracy than we're used to up at the airport," said our fixer. His voice was barely intelligible, a problem I blamed on the absurdly inexpensive cell phone I had purchased in Dar es Salaam, but I gathered that we should wait. Not that we had much choice. For a time, John called every twenty minutes to give an update. Then, every ninety minutes or so. Then only in response to my calling and immediately hanging up, a practice known in East Africa as "beeping." Done when one has almost no units left on their phone, it also indicates a sort of a financial pecking order. To be beeped is to be assumed to be more wealthy than the beeper. I was stuck on the ship without units, beeping, asserting my impotence. We sat with the mammoth pile of luggage inside the sweltering main deck, illuminated by endless rows of yellow neon tubes, and packed with industrial equipment. Instead of the gabble of the markets of Mombasa the soundtrack was an endless drone of engines and compressors, and a persistent rushing whoosh of air issuing from distant vents, loud but ineffective against the equatorial heat. It was like Waiting for Godot staged inside a factory. We had given up our quarters and brought the luggage down to show it to yet another customs-man; minutes later, going back to the cabin just to be quite certain nothing had been forgotten, I found the lights dim, an unknown backpack on the desk, and a man sleeping in what had been my bed. The ship was efficient in getting their fresh crew on board, whether or not Kenya was willing to admit the old.

I sat on the cases, sweating and reading Evelyn Waugh. When the Going was Good

is his late 1940s collection of travel writing culled from three books he wrote fifteen or twenty years earlier. In it he recounts the visit to Ethiopia that became Black Mischief,

and his subsequent travels south, to the very waters we had been plying. It was a wonderful instance of reading in the place, a notion I've written about here before. How much sweeter it is to peruse Shackleton while in Antarctica, or Garcia-Marquez on a shady patio in Cartagena! 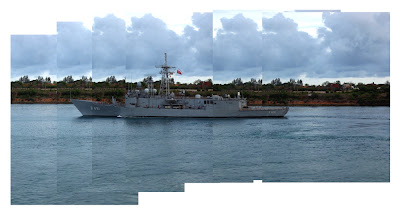 This Turkish battleship, off to search for pirates, was soon replaced by a returning German one, loaded with suspected Somali pirates. I'm glad to finally be on land!

The moist, hot hours ticked by. More customs gentlemen visited, proposing that the contents of our suitcases must be worth far more than the number someone had written on the bottom of the list they held in their hands. We hemmed, they hawed. They went away, promising to return "in an hour or so." Reading Waugh helped ease the pain of this purgatory between sea and land, but could not erase it altogether. I read that he visited Zanzibar and found it dull. He had plans to overland it to the west coast, to Congo-Brazzaville, or Cote D'Ivoire. He therefore sailed to Dar es Salaam, and then north up the coast to Kenya, to the city I longed to step off the ship and into. He dismissed it in a single sentence: "On the last day of the year we arrived at Mombasa, where my whole time was occupied with the immigration officers."