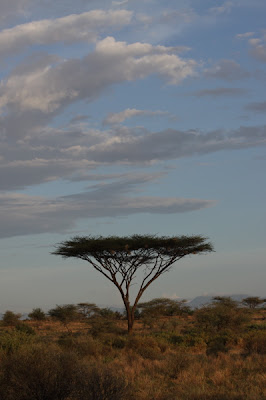 I don’t know how my fellow sound recordists feel about it, but for me our chosen profession is exciting not in and of itself, but because it leads to innumerable fabulous adventures. No sooner had we disembarked from two weeks on a factory ship in the Indian Ocean, than cameraman and bunkmate Axel Baumann and I found ourselves driving north across the bush. We went from Mombasa to Nairobi, and then beyond, towards the Ethiopian border, to Samburu, a Kenyan national reserve. Here we were to film in the days ahead. For now, blissful time off: the vagaries of scheduling the boat journey had left us with a full forty-eight hours to do nothing but wait for our producer, look at wildlife, and eat from the abundant buffet at our lodge. 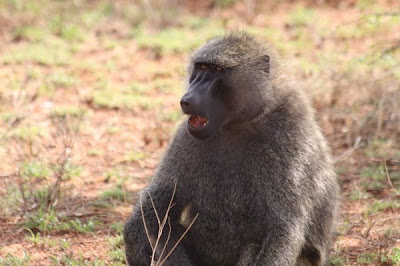 The baboons shall inherit the earth

Samburu is a deservedly famous safari destination, and was my first taste of what spotting game is like in a touristed spot. Several upscale lodges and tented camps are dotted along the winding river at its heart. After dawn coffee and biscuits the mini-buses and pop-top land cruisers depart at 6:30 AM sharp in order to have two and half hours of drive time and make it back for breakfast. Dirt tracks wind through riverine forest, acacia scrub and savannah. Nobody is without a camera, and the drivers keep in frequent contact with one another. providing alerts as to sighting opportunities of the so-called “big five,” the largest and most desirable animals. The lesser creatures which interest me just as much, like the tiny Pygmy Falcon or a gaggle of the exquisite Vulturine Guineafowl (2887) don’t make it on the radio, let alone the drabber songbirds like Donaldson-Smith’s Sparrow Weaver, which looks like a tidy overgrown House Sparrow but is rather a local specialty. A healthy group of giraffe or a family of elephant, however, can quickly find itself surrounded by its own gaggle of minivans. In the open bush country the vehicles are visible for miles, and the gathering of cars attract more of their own kind, including private drivers out of the radio loop who drive hastily up, fearful that they might be missing something. There are moments when the whole exercise becomes a rather amusing demonstration that the herd instinct is alive and well in the human species. 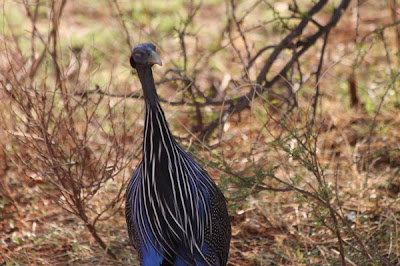 But the skies and spaces are huge, and I’m not complaining. The experience remains utterly sublime, filled with breath-taking episodes. Furthermore, without the significant dollars spent by wildlife spotters to justify conservation efforts, this majestic place would likely disappear. 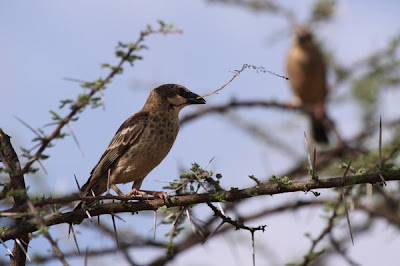 The drab yet exciting Donaldson-Smith's Sparrow Weaver, preparing to weave

I will now describe the most sublime of our many sublime Samburu moments, and don’t read this if you are the sort who likes their travel narratives free of gloating. If you only enjoy stories that offer schadenfreude, recounting the author’s myriad struggles and moments of comic suffering, you had best stop reading right now (and perhaps buy my book instead). The tale I am about to tell is not for those easily made jealous. 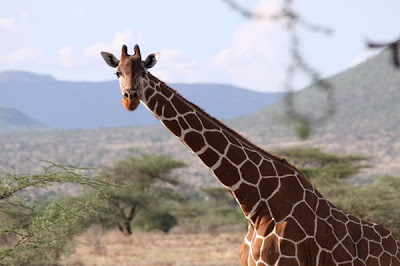 After a spectacular day of being driven about in the African bush with our heads thrust out the top of a minivan, we headed back toward the lodge across the flat, acacia-dotted floodplain. From luxurious proximity we had watched Elephants, Buffalo, countless Giraffe, hordes of baboons, Grevy’s Zebra and Grant’s Gazelle. Ornithologically, too, it had been a splendid day, filled with such avian delights as Tawny Eagle, White-headed Mousebird, Rufous Chatterer (2893), and Buff-crested Bustard. We were close to the lodge, and to celebrating the day over a cold bottle of Tusker. 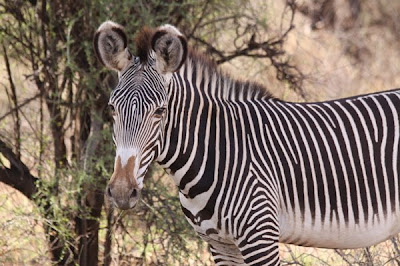 The setting sun dappled the stands of acacias with leopard-spot shadows as the weaver-birds flew back to their clusters of intricate hanging nests. Scanning for the last birds of the day in the passing treetops, I spied an elongated pale stretched shape, an anomalous blob near the top of one of those archetypal slope-roofed acacias, the stuff of setting sun picture postcards of the African landscape. “St-st-stuh-stop….” I whispered urgently for perhaps the fiftieth time that day. But I added one new and important word: Leopard! Our driver squeezed down on the brakes. Little following turrets of dust wafted past the side mirrors. “Shhhhh,” I said. “Right there, very close. Very, very close. In the nearest tree. Shhhhh. Back up, about twenty-five feet.” He did, and there it was, perhaps twenty yards away, stretched out along the horizontal upper portion of an acacia trunk, one of two adjoining trees, with nothing behind but low, dense, marshy bush. Creamy white, daubed with its own personal camouflage and dappled with the orange and shadows of the setting sun, the muscular beast turned its languid lemony eye on us, yawned, and relaxed back onto its branch. It was difficult to breathe, faced with such stunning views of this most difficult of large wild cats. “You guys are so very lucky,” whispered John Chavanga, our fixer, from the front seat. “Oh, my.” In the binoculars I could appreciate every spot, every rippling muscle. I soaked in the abundant length of the cat’s whiskers. Beside me, I knew, Axel was doing the same through a 300mm lens. 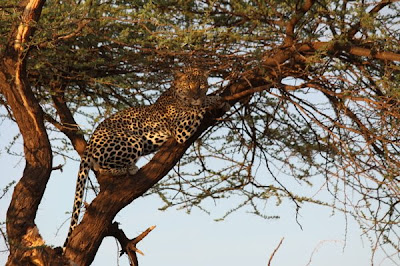 Minutes went by. “It’s amazing it is still there, putting on a show for you,” said Frances, our guide and driver. “Showing you everything. I have rarely seen one stay for so long. Soon he will go.” And indeed, the cat began to stir, cricking its neck and gently placing a paw further down the trunk, as if testing its exit. Without haste or urgency it walked and jumped its way down to the ground, then walked directly into the enveloping bush behind. We were quivering with excitement, exulting, and hi-fiving over this splendid sighting. The show was over, what a finale to a perfect day! 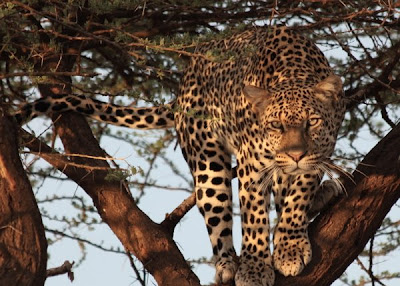 "Alright, if you nuisances insist on parking there, I'm out of here!"

I’m not sure whether Frances started the car again immediately, or if we sat there luxuriating in silence for a few more moments, or even whether I more heard or saw what happened next, but from behind the two trees there came a violent thrashing of the brush, a rippling movement. I’m now certain I heard it, as well, a rowdy crashing through the bushes. The leopard came streaking back out of the bush and bolted up the neighboring tree in perhaps a fiftieth of the time it had taken to make its languid descent a few moments earlier. Only just behind it followed a charging lioness. She cruised into the clearing, stopping short at the foot of the tree. The leopard looked down in panic. The lion looked up, evaluated. The trunk was narrow, the new cat much heavier than the fugitive. She paced, below, the leopard never letting her out of sight as he turned on his branch. Axel switched lenses. The lioness gave it up as a bad job and strolled back into the bush. Nonetheless the leopard continued to twitch with paranoia; it was no longer worried about us, mere humans in a land cruiser. Frances radioed. Everyone had already gone in, except for one microbus from the Serena Lodge. Eventually, it drove up. We had spent so long enjoying the two-act spectacle that by the time two very grateful ladies arrived and we exchanged whispered greetings, we had had our fill, and we left them alone to enjoy for themselves the leopard, still sitting nervous in his roost. 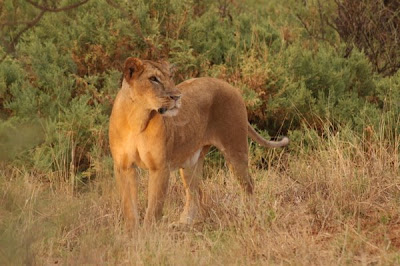 Simba! (looking resentfully up at the toothsome snack she just missed out on)

All photographs by the illustrious Axel Baumann

OMG -that photo of the big cat gave me good bumps-so beautiful!

Get the fuck out! You are so wonderfully lucky. My leopard (and shouldn't everyone have a leopard?) was a mere graceful shape on an arching acacia limb, silhouetted by the falling dusk, barely distinguishable from 150 or more yards away. Gorgeous experience.