I would tell you to keep the tip, but I see you already did 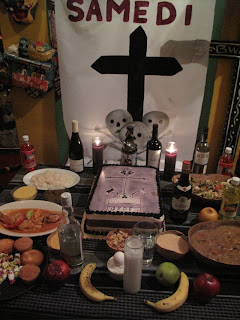 It would be wonderful if attending the Gede bacchanal at Miami Beach's Tap-Tap Restaurant became an annual ritual, but for the moment it has to be considered just a coincidence that I am back in Miami a second year in a row for the Haitian day of the Dead. 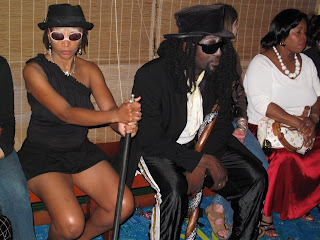 A familiar cast of characters turned up, both from the spirit world and from among the local supporters of Haitian culture. There's nothing quite like a perfect shrimp créole with voodoo drumming pulsing in the background, and so before the revels I had dinner at the front of the restaurant with my old friends Dori and Joseph Vuksanovic. 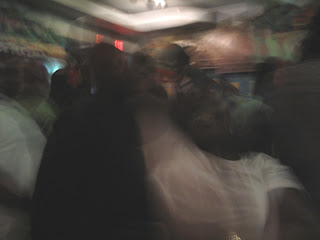 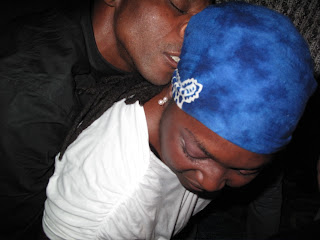 As we were settling up the check, Dori pointed out that the tip was included. It has been common for years in New York to add the tip onto the check for parties of six or more, presumably because twenty percent of such a significant sum proves to be such a daunting lump that large groups are emboldened to downsize the gratuity. But we were only three, and as a New Yorker it was shocking to find myself removed of all agency in the decision of how well to remunerate the wait staff. Dori laughed and explained that it is this way all over South Beach, because so many of the customers are tourists from Europe, unaccustomed to tipping.

I was reminded of an episode from my illustrious career as a temporary automotive storage specialist at that venerable hash-slingery, the Water Club, a fine dining establishment floating in Manhattan's East River. A good friend of mine, a waitron, as we valet parking attendants referred to the waiters there, came very close to losing his job after adding the tip to a check. The customer had run up quite a total, dining a deux and drinking Cristal champagne. He was of German origin. In thirty years in the city he had gained a New York attitude without losing anything of his accent. Our friend, who shall remain nameless, smelled a stiff. He assumed the gentleman was a Bavarian fat-cat just off the Lufthansa flight, someone accustomed after paying his bill to leaving on the table nothing but a few small coins and some pocket lint. His date was probably a pro. So he wrote his 18% onto the back end of the check.

Bitterness, tears and agony ensued. The man stormed about the dining room, proclaiming in a loud voice that he was not some tight-fisted Schwabian rube here to be taken advantage of. He owned an apartment nearby, he said. He had lived here for years and never seen such an outrage. He shouted, and pouted, and called for the head of the waiter on a platter, in lieu of an after-dinner mint. He told the manager that he wanted to see the manager. In this serene environment of white tablecloths and candlelight, with the East River burbling by outside the grand plate-glass windows, drama like this was unacceptable. The next day a memorandum was issued by the administrative offices of the restaurant informing all wait-staff (and, inexplicably, the valet corps) that under no circumstances were gratuities to be added onto checks.

That Miami Beach has abandoned any remaining pretense of the gratuity's relationship to service is, just like Halloween in Red Hook, an indicator of America's growing sense of entitlement and inevitable, concomitant decline. 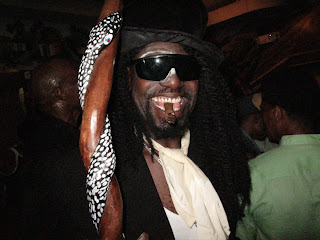