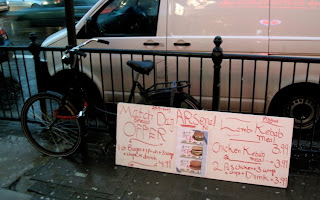 I haven't been in London in a while, and I'm trying to see as many people as possible. I rang my old friend Kay to see what was on. It had been some seven years, since she came to a barbecue in Red Hook.

'We're off to the football match on Sunday,' she said. 'Chelsea vs. Arsenal. It'll be mental. You can meet my son.'

'Do you think I'll still be able to get a ticket?' I asked.

Kay laughed. 'Not in your lifetime. We're not going to the stadium, just round the pub.'

Later she explained that tickets for the Arsenal games at the 60,000 seat Emirates Stadium, whenever they do go on sale, sell out in a matter of seconds. At some 90 or 100 pounds a throw.  (Scalped tickets on ebay sold at $450 for Sunday's match).

A tidal wave of profit-taking, Russian money, international football mania, and astronomical player salaries have elevated ticket prices into the stratosphere. Apparently what the blue-collar working-man average-joe football fan in London does today, with tickets either unavailable or unaffordable, is to watch the game in a pub as close to the stadium as possible, in the hope that the energy from that arena of gladiators might surge through the surrounding neighborhoods, like foam frothing over the glass of a hastily-poured pint. Walking up Holloway Road in the rain, about half an hour before kickoff, I was part of sea of red-scarved supporters. Only the luckier, richer half of this crowd was actually headed to the stadium. The rest were looking for a widescreen television and standing room. Many local businesses had Arsenal flags prominently displayed in the windows, and the pubs were already full to bursting with chanting and singing fans fueled by testosterone and beer. 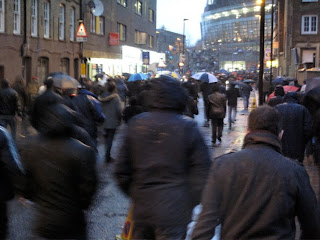 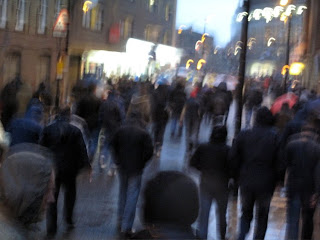 The rabid energy of the crowd was impressive, and it was difficult not to remember the chilling scenes from Among the Thugs

in which Bill Buford finds himself caught up in the destructive rampages of Britain's football hooligans, rather uncomfortably enjoying the raw, adrenaline rush. 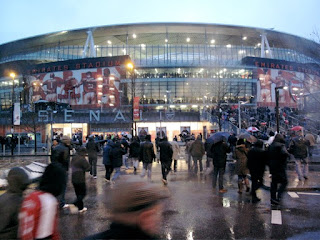 "will they rename Emirates Stadium, now that Dubai has gone bye-bye?"

I didn't see a single blue Chelsea scarf or Didier Drogba jersey. The civil war of London is no laughing matter. There is none of the casual banter and harmless insult exchanged between fans of opposing teams that I'm used to witnessing on the rare occasions I concern myself with sports in the United States. At least not in the drinking establishments within a stone's throw of the "home ground." The Chelsea supporters apparently stay in south London in their own pubs, and any headed to the match kept their colors well concealed underneath their coats and jackets, like Crips trying to take a short cut through Los Angeles. Kay informed that they go into the stadium through a separate visitors entrance.

At the pub about a block from the gigantic stadium all the chairs had been cleared away to avoid them being flung about during the game. Kay assured me that anyone proclaiming allegiance to Chelsea risked a good pummeling, even while noting that Arsenal was a "family team," comparatively free of hooligans. We didn't watch much of the match, as we were catching up on the intervening years, a task made challenging by an almost incessant chorus of spectators chanting "Red Armeeeee, Red Armeeeee!" in a sort of chaotic and asynchronous round that at times approached the sort of sublime accidental sonority that is the goal of much avant-garde music. "The referee's a wanker," they chanted in semi-unison, before continuing on to others much more lewd. 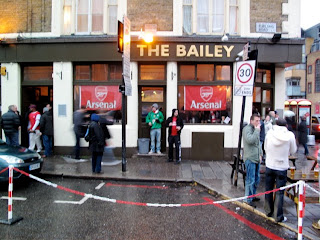 The remarkable thing, of course, is that we were in a pub. Neither the referees nor the opposing team were within earshot. The notion that the home team crowd, chanting in unison, might overwhelm the opposing team with their expressions of love for the local boys, or that the officials might wriggle in dismay in their jailhouse stripes, was off the table. The chanting served no other purpose than as a raw expression of the primal urge.