No word yet on whether or not it's a single malt...

Via the continuously fabulous Boing-Boing comes the exciting news that a couple of cases of Scotch abandoned by Ernest Shackleton's expedition may soon be disinterred by the Antarctic Heritage Trust after one hundred years buried in ice. As much as one would like to have a sip, tasting the romance and aura imbued by a century of icy mellowing, the most remarkable thing about this discovered cache has to be that it wasn't all drunk back in the day. 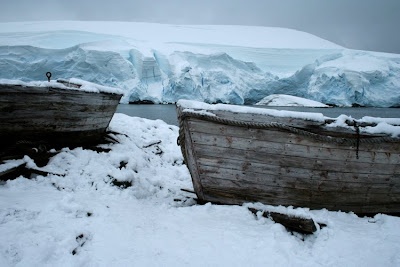 I can pretty much guarantee you that at the McMurdo Antarctic station of today any cases of Scotch that might go missing end up consumed, well before the end of the season. When the weather is inclement and resupply of alcohol uncertain, folks are known for lining up at the lone shop, buying up anything stronger than a ginger ale, and hoarding it. How Shackleton's boys let a couple of boxes slip through the cracks and into a real or proverbial crevasse, undrunk, is just another of the eternal mysteries of Antarctic exploration.

I think Johnnie Walker might be trying to claim the barrels. Based on a commercial I saw on Television.