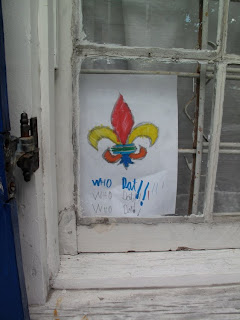 The collective outpouring of joy on the streets of New Orleans last night was enough to make a sportsfan out of even a football-hating curmudgeon like me, someone who had barely registered that the Colts had left Baltimore and moved to Indianapolis. And that happened all the way back in 1983. But it doesn't matter what city the Colts claimed to represent, because the New Orleans Saints crushed them underfoot like a tired string of Mardi Gras beads on Canal Street.

As people have been saying for weeks in this town, "this is about so much more than football." For this crime-ridden, flood-damaged, third-world outpost on America's southern shores, the Saints' first-ever Superbowl appearance was a gigantic unifying event, bringing together races, classes, uptown and downtown, hipsters and hip-hoppers, all happy to invest their aspirations and self-esteem in the one common goal of victory. Saints banners and bumper stickers and tee-shirts were everywhere. Revelers wandered the streets, charging up to total strangers and screaming "WHO DAT?" (say dey gonna beat dem Saints?) at the top of their lungs. I've been Who-datting right back; I hope that's the etiquette. (Tulane Geographer and Brooklynite transplant Richard Campanella told me "I've been Who-datted in the street by some really beautiful women. I still don't know quite how you are supposed to deal with it. Do you say 'oh, nice to meet you, I'm Richard?'") 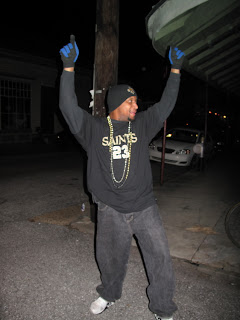 The feeling that the flood might have destroyed the essential character of New Orleans, which now has 100,000 fewer residents than it did before Katrina; a sense that the city had transitioned from tourist stronghold to terminal aid-recipient; the blighted, blown-out buildings and the still-wasted neighborhoods and the ineffectual local government and the high crime rate: all of these things, these problems, were as nothing before the blinding light of the onward marching soldiers, the torches held high by the crusading Saints, going all the way to Miami. That essential and eternal New Orleans jazz-gospel classic, "When the Saints go Marching in," which I listened to over and over as a child on scratchy old Preservation Hall albums, took on a deep, city-wide resonance. It became the hymn of a wounded people rising back from the mud and slime of the Mississippi Delta muck to reclaim New Orleans' place as a proud and great American city. Every band of every musical persuasion played it in clubs in every corner of the city. 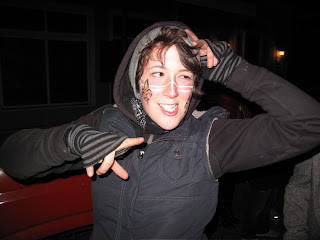 The NFC Championship victory at the Superdome finally redeemed even that imposing chunk of architecture for the city. Synonymous after Katrina with violence, hunger, thirst, and the abject failure of the Federal response to the flood, the massive stadium had become a representation of loss and losers, poverty and squalor, hardly associations a city wants its football palace to conjure. But hours after the Saints beat the Arizona Cardinals there two weeks ago, the cleanup crews had to beg the partying fans to pack it up and go home, as if the people of New Orleans had decided symbolically to reinhabit and rebrand the building they had once fled to as homeless, soggy refugees. 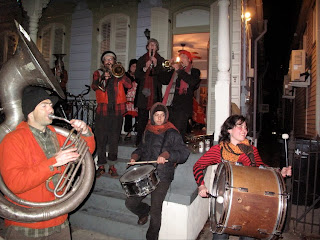 In Bywater, where I watched the game, people poured out onto the sidewalks after the final whistle, popping champagne corks and Roman candles under the yellow streetlights. On Louisa street, a brass band immediately started playing, and the road filled with joyous dancers. Even the police, reviled here thanks to a reputation for immense corruption, got a rare thumbs up. One patrol-car passing by broadcast a "Who Dat!?" over their megaphone growler. "That might be the best thing I've ever heard," said a young woman on the streetcorner, basking in the afterglow. 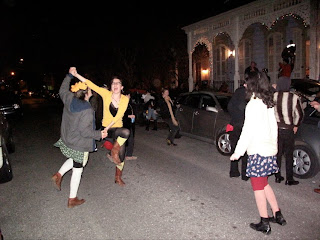 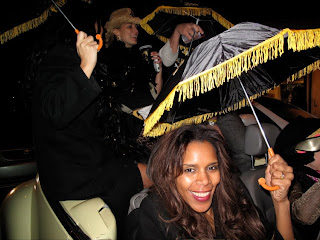 Wonderful Richard! A night I will never forget.