I love it here too

It broke my heart to leave New Orleans just four days before Mardi Gras, but as more than one person down there told me, unless you are a bartender it's hard to make a buck in that town. With a New York job offer starting fat Tuesday itself, I hightailed it out of the Crescent City, via Hale County, Alabama, where I interviewed the director of the Rural Studio, Andrew Freear, in the middle of a blizzard that pretty much closed the state down. That storm was heading east, right across Atlanta, and pretty much tracing my planned route along Interstate 85, so I gambled and headed north instead. Even though I-59 and I-81 cut up into the high country beside the Great Smoky Mountains, there was a blank patch on the radar map that made me think that might be the way out. And I wanted to get out. People in Alabama, to generalize wildly, seem to think that the way to behave in a car in a nasty snowfall is to drive as fast as possible so as to be out in it for the shortest possible time. 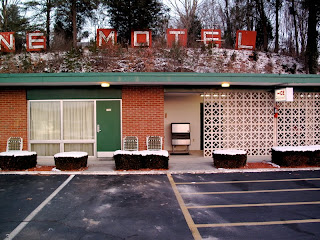 Another great low budget motel, run by another nice guy from the Indian subcontinent.

After a couple hours of crossed fingers as the snow continued to fall and the temperatures to drop, the counter-intuitive strategy of driving into the mountains to avoid the snow worked out, and halfway through Tennessee I found myself on a dry highway. Saturday morning I woke up in the Alpine Motel in Abingdon, Virginia, about as far as you can possibly be from New York City and still be in that state. Hitting the road at 7AM, I stopped only for gas and pimento cheese sandwiches, knocking out the 600 miles fast enough to get back to Brooklyn in time for sundown. I was all ready to collapse into bed in blissful exhaustion when I made the mistake of checking my email. "Disco Throwdown," it said. Tonight. Manhattan. Uh-oh, it's on! 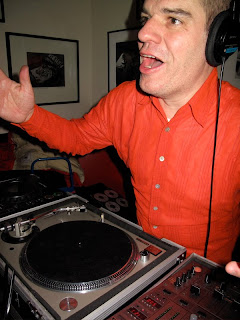 Sender behind the decks

I know, you're thinking after two weeks of pre-Mardi Gras parties, brass bands, Superbowl shindigs, costumed madness and beads flying through the air, did I really have to go to another party? After six-hundred miles of road rash? The answer, of course, is yes. You see, the mighty DJ Jonny Sender of the immense Don Flan moved to the French Alps about a year ago, and as far as I know he hasn't been back in the USA since. But there he was, on the bill for the evening. Unmissable. I grabbed a disco nap to prepare to throwdown and around midnight Eva and the Wolfe and I cabbed it to Chambers Street. Sender's jaw dropped when he saw me, which was the desired effect, and then we proceeded to turn the party out. It was a joyous reunion, what with two-thirds of the Flan in the house; we were only missing "La" Cynthia. And Sender wrecked the set, proving that just because he now spends his days hanging out in the alpine snow with his sons, he hasn't lost any of his legendary house-rocking skills. Hopefully he'll start to commute. The Manhattan youth had no idea who they were messing with. I wore out a few women who came with lame boyfriends who couldn't or wouldn't dance, and we closed the joint down, burning a hole in the dancefloor on the back of a final triple-play from the Afrosound. Sender noted that we of the Don Flan were rocking the hell out of the cumbia groove fully fifteen years ago, at least a dozen years before it became an international sensation. No doubt. We were digging in crates when you were pooping in your nappies and we've forgotten about more records than you'll ever see, so step off. Yuh kyaan test. 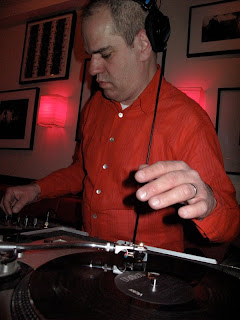 Real Vinyl: none of that Serato digi-nonsense. Sender is probably the last deejay out there shlepping a crate of records all the way from Geneva. 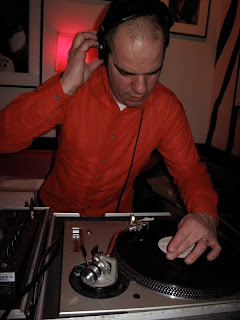 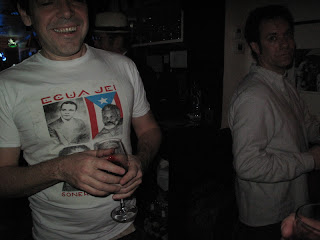 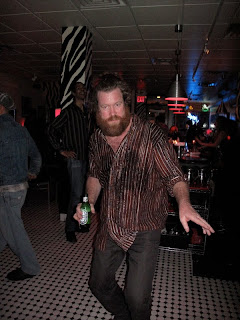