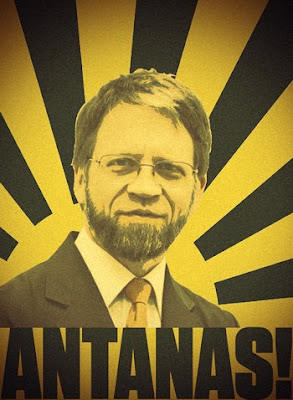 Few people in the United States seem to be as charged up about the Antanas Mockus presidential campaign as I am, although there was a Simon Romero story in the New York Times a few days ago. By and large I suspect that the major media here is going to stand on the sidelines scratching their heads until he is elected later this month, and then react in confusion and dismay. Mockus will again be described as "the formerly eccentric mayor of Bogotá," since once you are the president of a country, or even become a major candidate, you are apparently no longer eligible to be "eccentric," unless perhaps your country is in Africa. Mockus will be compared to Chavez and Evo Morales by journalists unable to conceive of a Latin American politics that defies the left versus right duality.

Few, in short, will get the story right. The story I hope people will write is about a green tidal wave of emboldened and motivated youth abandoning their generation's justifiably cynical view of electoral politics to rally their friends and families around a candidate offering change and vision, via a viral new media campaign beyond the understanding or control of the existing structures of power. If that sounds to you anything like the way Obama got into the White House, it isn't a coincidence; the reason I'm comfortable going out on a limb and predicting a Mockus victory is that, just as in that campaign, in Colombia the young graphic designers, facebookers, filmmakers, muralists and deejays have already chosen. 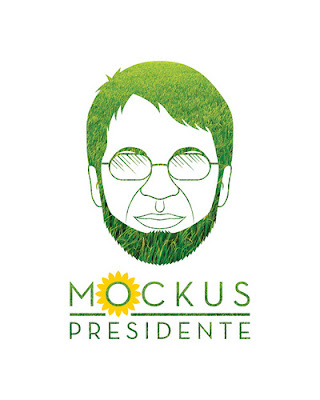 I believe none of the propaganda on this page to be the official creation of the Mockus campaign, although "Evolución" might be, but, like Shepherd Fairey's iconic high-contrast Obama poster (the only relevant and powerful work that artist has ever come up with, in my opinion, but at least he got one big one right), it doesn't matter, as it's all part of an unstoppable message that is spreading faster than bird flu in migration season. 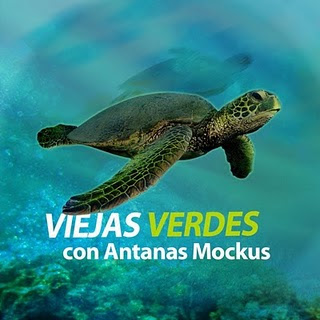 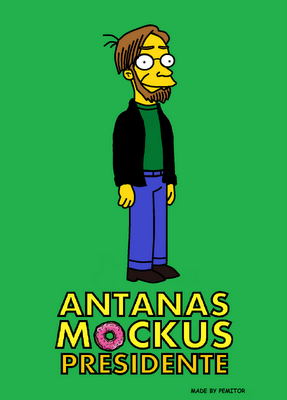 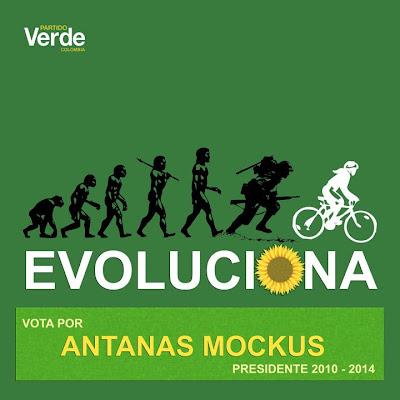 I don't need pollsters to tell me whether Mockus is looking good; you want an unrefutable, unscientific sampling? Searching the "fan" pages (now apparently the "like" pages) for "Antanas Mockus" on facebook reveals 361 results, led by Mockus' official page, which is liked by 597,887 people. Juan Manuel Santos' page, on which the only viable rival candidate looks like an airbrushed Botox victim, is liked by a mere 135,669. Far more telling, however, is the nature of the subsequent unofficial facebook pages. The next four of the top five Santos groups are all actually anti-Santos pages, including "No to the politics of war, I'm NOT voting for Juan Manuel Santos" (with 38,642 likers), "Those of us who do not want Santos for president, WE ARE MORE!" (22,995), "We will not let Santos rise on the basis of FALSE polling" (9,143), and "This inert lump of coal can get more fans than Santos" (10,830). In contrast, I could find only one anti-Mockus page among the first fifty pages devoted to that candidate, on the second page of search results, with a mere 3,328 subscribers. The many, many pro-Mockus pages include "Creatives for Mockus," "People who want their parents to vote for Mockus," "I'm voting for Mockus, ask me why," and "Colombians living in Sweden for Antanas Mockus." See you on May 30th.