My Brother, the Doctor

Yesterday I took time off from my rigorous and demanding schedule of watching three World Cup games per day and drove down to Philadelphia to attend my brother Luke's dissertation defense. Luke had asked me to lend whatever moral support I might have to spare. I was expecting a kind of academic version of a football match, with a coterie of mudslinging professors going forehead-to-forehead with my poor brother, kicking him in the shins and exploiting every opening and weakness in his argument as they rampaged through the hallowed halls of the University of Pennsylvania. While speeding down the New Jersey turnpike, listening to Argentina pummel South Korea on the world's best portable radio,

I imagined myself as a sort of boxing trainer who would crouch in Luke's corner with a towel, ready to mop up the inevitable tears, blood and vomit that would soon be splashing onto the floors of the Department of Anthropology.

In fact, and almost to my disappointment, the event proved to be far more affirmative than combative. I've forgotten the long and challenging title of Luke's doctoral thesis, although I know that it is about linguistic exogamy in the tribes of the upper Rio Negro of the Brazilian Amazon. If you don't know what linguistic exogamy is, don't feel bad; I only know because Luke told me, a few times. It's the practice of only marrying people from a tribe who speak a different language than your own. Much of the terminology in Luke's presentation was so far beyond me that if I so chose I could practice linguistic exogamy myself, simply by marrying a linguistic anthropologist, that remote is their idiom from our own. Words and concepts like "performativity," "virtual metapragmatics," "patrilects," "proleptic," and "signaling indigeneity" flew through the air like hard-hit soccer balls. (By the way, it isn't just me that's clueless, Blogger, on which I'm writing this, thinks all of those words, except for "virtual" and "signaling," are misspelled, meaning they aren't in Google's dictionary either!). Soon I was using the towel I had brought to mop my own sweaty, confused, brow.

But if I had trouble following, not so the committee of professors also in attendance. Professor Greg Urban, making introductory remarks before Luke began to speak, said that the dissertation in question "reshapes our understanding of what is going on in South America in major ways." GOOOOOOOOOAAAAAAL! The Graduate Group Chair, Professor Deborah Thomas, then announced that Luke would have approximately half an hour to discuss his work. Twenty-nine and a half crisp minutes later, he concluded a presentation packed with almost mathematically precise powerpoint slides.

It was at this point I thought the bloodletting would finally begin, and I awaited the first of what I expected would be dozens of excruciating and unanswerable questions, flying flat and fast like an endless series of penalty kicks, with Luke as the hapless goalie. Here, too, I was sorely disappointed; the few questions asked were more like suggestions, softballs intended to promote minor changes in the text that might help catapult this already epic, if specialized, work to new heights of popularity. The subtext seemed to be that after a few slight adjustments, a bestseller, at least in the peculiar language of linguistic anthropology, was not only within reach, but virtually assured. Deborah Thomas then unceremoniously kicked us all out of the room so that the quartet of professors could discuss Luke's fate (apparently, in this sort of trial, the jury stays in, while everyone else leaves). We stood in the hall chewing our knuckles fearfully, while assuring Luke that he had done an excellent job. But these agonizing moments were short; the jury did not deliberate for more than a handful of minutes before we were called back into the salon. "The verdict is, you did a fantastic job," announced Professor Thomas.
OTRO GOOOOOOOOOOAAAAAAAAAL!!!!!!!!!!!!!!!!!!!!!!!!! GOOOOOOOOOOOOOOOLAAAAZOOOOOOOOOO!!!!!!!!!!! 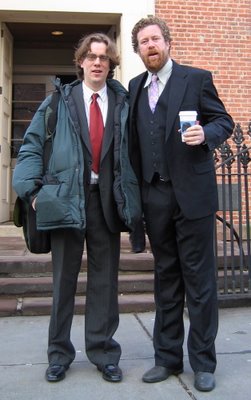 He's the smart one, on the left.

Email ThisBlogThis!Share to TwitterShare to FacebookShare to Pinterest
Labels: a birth in the family, linguistic anthropology, luke fleming, world cup

A fraternal masterpiece. And look who dressed for
the occasion! - touchingly fraternal.

Well into the greatest decade of all for anthropologists, Luke echoes the resolve of other and fellow anthropologists on looking less fashionable than the norm on Pine Street. Its a student's suit -- has UPenn seen the likes of Luke Fleming before? Of course, any spoof on Downing Street needs a student and his suit.