Cooking shrimps with the heads removed is like eating pitted olives. It might be more convenient, and less disturbing, but the tradeoff is a definite loss of flavor. But perhaps to save their customers from having to encounter the bulging eyestalks and delicate tentacles of the head-on shrimp, the Red Hook Fairway doesn't sell them. Suffering from a craving for another of Donald Link's superlative dishes, a spicy, minty Vietnamese take on the Cajun shrimp boil, I was obliged to head down to the Brooklyn Chinatown, which lines 8th Avenue from about 45th to 60th streets. The Hong Kong supermarket on 61st street is even better stocked than the one on Allen and East Broadway in Manhattan, and has all sorts of things that are sometimes difficult to come by, like fresh pork bellies, dressed rabbits and large, meaty shrimps with heads. Near the door and the registers are stacked innumerable brands and styles of rice in hefty twenty-five pound sacks. 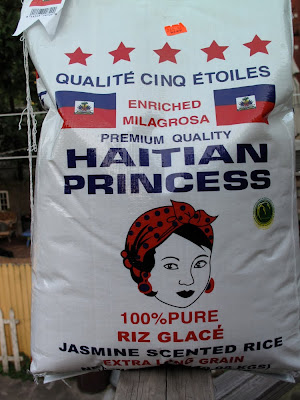 As I was paying for my shrimps I spotted something odd, a pile of gleaming white bags adorned with the Haitian flag. The news from the Haitian rice growing industry is not good, so this was a bit confusing. Until at least the late 1980s, Haiti was self-sufficient in rice production, but in recent years the sector has collapsed, thanks largely to the free trade strategies pushed by the United States as part of the neo-liberal plan. United States rice, produced with the help of a variety of agricultural subsidy schemes, began to appear on the Haitian market, undercutting Haiti's unsubsidized domestic rice growers. Haitian farmers, unable to compete on price, stopped growing and producing. The industry collapsed and withered. Recently, in the wake of the earthquake, Bill Clinton admitted that US policy on rice had been devastating and wrong, although he failed to extend his logic to a broader critique of neo-liberalism. "I have to live every day with the consequences of the lost capacity to produce a rice crop in Haiti to feed those people, because of what I did," he said. It is perhaps only a painful coincidence that Bill's home state of Arkansas is a center of US rice production; our country has been pursuing comparable strategies in the production and export of a broad variety of staple foods for the last thirty years. Under the circumstances I thought it highly unlikely that an enormous Chinese supermarket in Sunset Park, already overflowing with bags of rice from Thailand, Vietnam and Japan, would find the floor space for so elusive a specialty, so rare a commodity, as Haitian rice. Is there any Haitian rice still produced at all, and is any of it exported? I wondered. 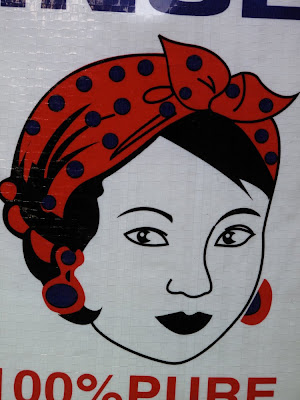 The Haitian flag, the colorful red and blue motif of the bag, and a vaguely Asiatic almond-eyed version of Aunt Jemima all proved only to be part of a branding strategy. The rice was clearly marked as having been produced in Thailand, and was being sold as "Haitian Princess" brand Hom Mali Jasmine, my favorite variety. But the thai origin of this rice leads only to more questions. It is a strange choice, isn't it, to name your rice after a basket-case of a country, a small, impoverished Caribbean island nation? In Africa these days, small boutiques looking for cachet often calls themselves "Dubai Fashions," or "USA cellphone," associating themselves with the allure of those faraway Shangri-Las, but Haiti doesn't have such resonances of luxury and dominance. In fact, to make a possibly racist observation, it seems to me likely that few customers at the 61st street Hong Kong Supermarket would take away any particularly strong association from this bizarre packaging.

So what it is all about? The only hypotheses I can come up with are that this thai rice was packaged for sale within the borders of Haiti, or to spark the interest of aid organizations shopping for earthquake relief supplies. Perhaps a Bangkok rice executive read Clinton's remarks and saw an opening in the market. Somewhere along the distribution chain it was diverted. Maybe a container fell off a ship in the Red Hook container port, and so this rice ended up in Brooklyn. I couldn't resist buying a bag. I haven't cooked any yet, but I'll report later on its quality. 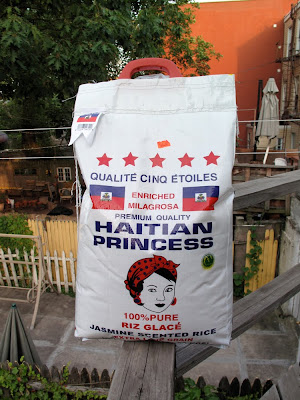 UPDATE: There is no question that semiotics is a theoretical discipline, not an exact science, and a recent trip to an ethnic grocery in Somerville, Mass., has me wondering whether there isn't something more to the Thai-rice-with-shameless-Haitian-branding story than I have yet uncovered. In the first place, this small purveyor of Asian and Caribbean necessities was also a stockist of "Haitian Princess" brand rice, meaning the stuff did not just get diverted from an aid ship to one random Asian supermarket in Brooklyn. But that's not all, they also had, right next to the Basmati, this: 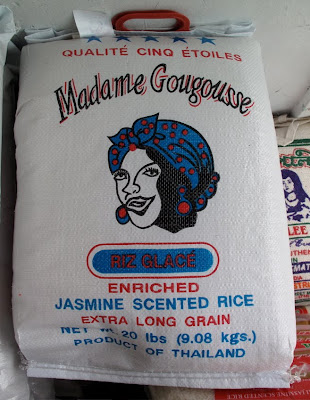 Who the hell is the cockeyed Madame Gougousse, with her Picasso cubist-period nose, half pointed and half rounded, and her racially ambiguous slash mouth, twised grin and half-shaded face? Frankly, she looks like a satanic version of the Haitian Princess. Note also that the "Five Star Quality" legend written at the top in French, as well as the five stars themselves, are, font and size-wise, identical on the two bags. Only the colors are reversed, as they are in the polka-dotted Aunt Jemima do-rags both women are sporting. It turns out that Madame Gougousse doesn't only adorn rice, she's the mascot for an entire line of tropical products, and she even has her own facebook page. 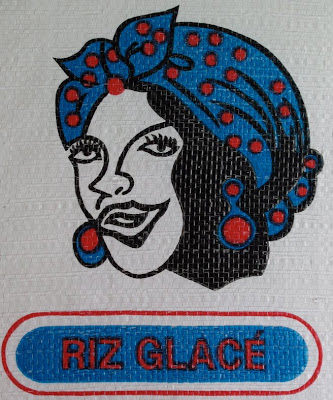 I'm a firm believer that the simple and obvious solution will very frequently turn out to be the correct solution, but this is all getting so terribly complex that I'm having trouble imagining what that solution could possibly be. And as if Madame Gougousse wasn't enough, there's this: 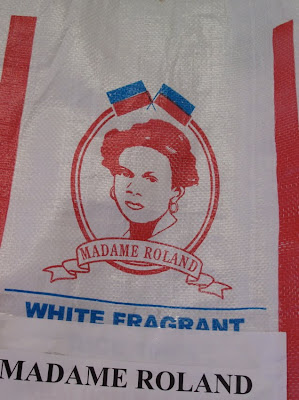 Currently out of stock at this nameless Somerville grocery, but represented by an empty bag hanging above stacks of other brands, is Madame Roland's White Fragrant rice. Madame Roland has a pair of (partial) Haitian flags crossed above her head, on which she is thankfully not wearing a handkerchief, and seems quite clearly to be of African extraction.

I find it difficult to imagine that there are multiple competing Thai rice companies all vying for the Haitian food-relief market with these many variations on a theme. Evolution, in graphic design as in species, takes time, and I'm left wondering whether there isn't some much more ancient trade relationship about which I am so far ignorant. Perhaps, despite her objectively more demented graphics, Madame Gougousse is well-established, and the Haitian Princess, along with Madame Roland, is trying to ride on her coattails? Or was the now unavailable Haitian rice once so desirable that the Thais, who grow an excellent product themselves, tried to muscle in on the Haitian's export market, perhaps in francophone West Africa? Anyone who can illuminate us, please chime in.

Your last two posts are outstanding--sort of the blogger as subliminal investigative reporter. You might help us suss out the mystery of the rice if you told us its price in comparison with others on the retail market. And are you sure that Arkansas rice farmers are subsidized?...Just asking.

This article: http://www.guardian.co.uk/world/2005/apr/11/hearafrica05.development
in the Guardian describes the scale of rice-farming subsidies in the major developed nations, albeit several years ago. Here's a sample paragraph:

"Between them, the US, Japan and the EU subsidised their rice production by $16bn (£8.48bn) in 2002, the latest year for which full data are available. The US policy is particularly harmful for the rice-growers of Ghana. In 2003, the US paid $1.3bn in rice subsidises to its farmers and sold the crop for $1.7bn, effectively footing the bill for 72% of the crop."

I'm certain deeper Googling would reveal the specifics of Arkansas and I have no reason to suspect rice production in that state is not subsidized, versus elsewhere in the US.

Most Hom Mali Jasmine rice is available, regardless of packaging, for approximately $15 for a 25lb. bag, in Brooklyn's Chinatown. In Somerville Mass., I saw the same bag of rice today for $17.50. By the way, either would be a bargain price in Haiti.

Dude, you are a such a loser. Don't you have anything better to do.

Basket case of a country???? Wtf does that mean? Get on a plane headed to Haiti and see how many "basket case" foreigners daily are aboard filling up seats.