Now, I love nature and almost everything in it, perhaps more than most people, but there are a few creatures out there revolting enough to make one question the existence of God. The leech, for instance. Those which swim about in the warm shallows of pebbly freshwater lakes waiting for plump toddlers to go wading are bad enough, but the swimmers scarcely rank on the grotesque-o-meter when compared to the arboreal varieties of Asia and Australia. These prowl through the moist monsoon jungles, inconspicuous and thirsty, until, sensing the body heat of a passing mammal, they leap from the trees like kamikaze caterpillars. Brush up against the wrong leaf and your flesh will promptly be swarming with black, blood-sucking inchworms. 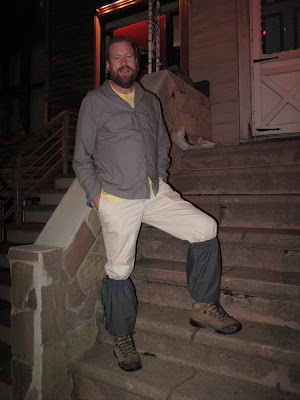 At home in Red Hook during a "comfort and fashion" leech-sock evaluation session in early April.

Short of a full-body Tyvek suit of the sort used to combat radioactive discharge at earthquake-damaged nuclear power plants, there is no entirely leech-proof costume. Precautions are possible, however. At Cat Tien National Park in Vietnam in late January, I met a party of German adventurers in the outdoor canteen, looking rather bashful as they sat drinking beers while wearing four sets of matching purple twill gaiters. These, they explained, were "leech-socks." January in Vietnam is the height of the dry season, widely advertised as leechless. Nonetheless, I had managed to collect two of the gruesome creatures that day, during a ten kilometer hike on a narrow and overgrown forest trail. I stared at the Germans in their aubergine accoutrements for so long that I was finally forced to assure them that I was not making fun of their socks, but was rather jealous. Where, I asked, had they obtained them? 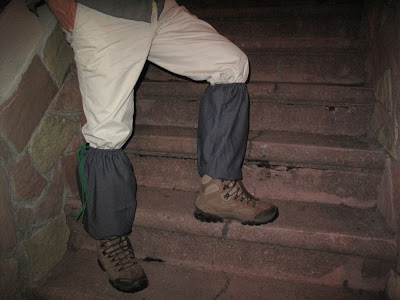 Their outfitter had provided them. As it turns out, there are few places to purchase leech socks. The locals of the leech-infested zones don't seem to use them, and I could not find any for sale in Vietnam, much less in purple. Knowing I was to be in the Indian Himalaya in mid-May, primo leech drinking season, I attempted the mail-order route when I returned from Vietnam. Googling revealed this guy, who claims to sell the world's best. I briefly considered dropping the forty bucks he charges for a pair, but when I realized shipping and handling was not included and that I was looking at a $55 tab for a pair of socks, I temporarily forgot my fear of leeches. More googling. At last I found the sort of post I had been looking for.

The advice was simple. Cut off the legs from a pair of old pants, sew closed the bottoms, and add a drawstring at the top. Apparently leeches cannot penetrate twill or other densely woven cotton, as opposed to regular socks, which they treat like a revolving door, an access-panel to your hard-earned corpuscles. There is no need to use Tyvek, Gore-tex or anything else other than tightly woven cotton.

I'm not much of a quilter, so I consulted my friend Ashley Singer, one of the craftier people you will ever meet. She owns industrial sewing machines and knows Matt Damon's hat size. She spends her days making monsters and goblins for the sets of big Hollywood movies, and blocking custom-made fedoras out of beaver felt. She plays the harp.

"How would you feel about helping me make a pair of leech socks?" I asked. (I suspect both of us knew this really meant: how do feel about making some leech socks for me?) A pair of old lightweight jeans, ten or so minutes with the sewing machine, and presto. 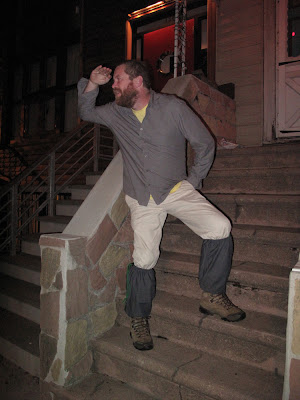 When I asked her if my new leech-socks made me look like a brave and intrepid explorer, Ashley suggested that it might be best if I peered out at the horizon "as if scanning the area for leeches."

COMING SOON: PART TWO, In which THE LEECH SOCKS are PUT TO THE TEST in the LEECH-INFESTED CLOUD FORESTS OF THE INDIAN HIMALAYA, a post that will include GRAPHIC IMAGES OF MY naked TORSO.