The indignities of the economic disparity between the poor and the rich are many, but the rickshaw is in a class of its own. In the west we routinely hire those less fortunate than ourselves to do the jobs we would never do: "illegal" Mexicans are paid substandard wages to pick our tomatoes while they live eight to a motel room; maids trying to get a toehold in the new world scrub our toilets. Nonetheless, the typical enlightened westerner is revolted by the human-powered rickshaw, a basket on wheels pulled through the streets by a jogging coolie. One person reclines in a padded chair, elevated above the other. His fellow human, reduced to a beast of burden, runs ahead, all the while pulling this wicker chariot by two sturdy steel bars. The truths this relationship exposes are too raw.

There are few places where rickshaw-pulling remains a thriving trade. I did not see a single one in Vietnam or Cambodia in the two months I spent in South-east Asia this winter. Rumor has it they have been banned. In Vietnam, even the far more civilized tricycle taxi, or trishaw, seems endangered. Tourists are happy to ride in those, but in the era of the ubiquitous motorcycle taxi they are no longer a popular form of transportation for the locals, who are in far too much of a hurry. In Calcutta, however, rickshaws are still to be found on almost every block. 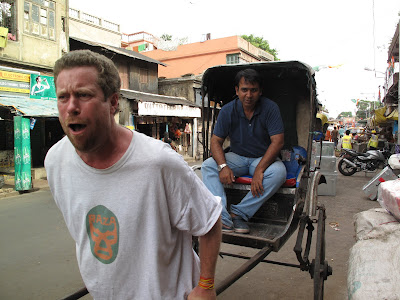