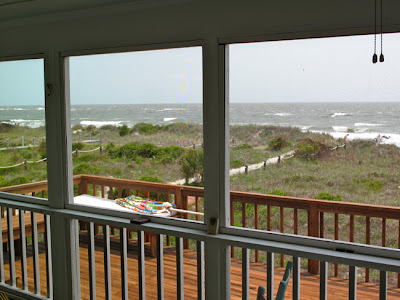 Hard on the heels of a Vermont mountain 4th of July weekend, we headed to Edisto Island, beneath the frying skies of the Carolina low country, for another five-day relax. It's almost as if we're trying to sample all the archetypal American summer vacations in a row. Like most great holidays both of these long weekends have involved a lot of communal cooking. Teams of family and friends gathered together in the kitchen, sweating shoulder to shoulder over the open flames of a gas range, all looking forward to a splendid meal together. In Vermont we were hosted by the lovely Sue Schickler, a professional chef. Here on Edisto, at the beautiful beachfront home of Henry and Virginia Woodhead, Frank Harmon arrived from Raleigh with a copy of Edna Lewis and Scott Peacock's The Gift of Southern Cooking under one arm and two tubs of lard under the other. Lewis, he announced, "treats lard as if it is a precious commodity." It was clear we were in for some serious cuisine. 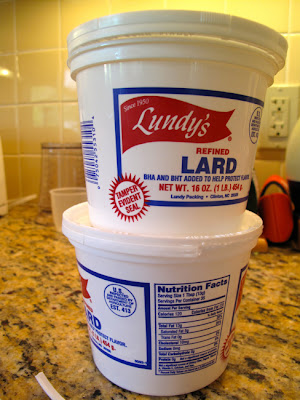 Lard has gotten a bad name in the last fifty years, thanks to the cholesterol police. You won't find it on the shelves at Whole Foods, and we couldn't find any at the fancy granola and organics version of Whole Foods on the outskirts of Charleston, SC. These sorts of places have half a dozen brands of butter imported from France, Ireland and Denmark jostling for refrigerated shelf-space, but they don't carry lard, which seems to be one of the few blacklisted ingredients that has yet to be widely redeemed in our foodie culture. Lewis and Peacock, however, seem to have set that redemption as their goal; a quick look through their cookbook reveals pig fat to be a crucial ingredient.

Frank Harmon had purchased his lard at Doscher's supermarket, on the Savannah highway, an unrenovated time capsule entirely free of organic tomfoolery. The contrast between the two supermarkets was sociologically fascinating: Doscher's clientele overlaps with that of a Wild Oats even less than its selection of products. All the other shoppers were African American. There, next to the tubs of crisco, was the lard.

Harmon announced that we were going to cook fried chicken, which I had always thought heart-stopping enough when prepared in what I thought was the traditional manner, namely submerged in boiling vegetable oil. No, Harmon explained, that results in flavorless nonsense when compared with the results of Dame Edna Lewis' recipe, which is skillet-fried in lard and butter. It isn't often that I'm accused of being a health-nut, but here was Harmon scoffing at my fear of hardened arteries. Nonetheless, I would argue that Lewis' recipe verges on the comical in its rococo employment of fats:

First: Brine the chicken pieces overnight.
Second: Drain the chicken and soak it all day in buttermilk. 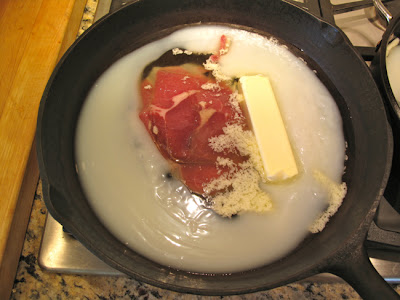 Third: Melt one pound of lard with a stick of butter and flavor this abundant compilation of animal fats by frying in it a few healthy slabs of "country ham" for approximately 45 minutes, until the country ham is brown and leathery, having rendered all of its own fat, salt and flavor into the lard mixture. 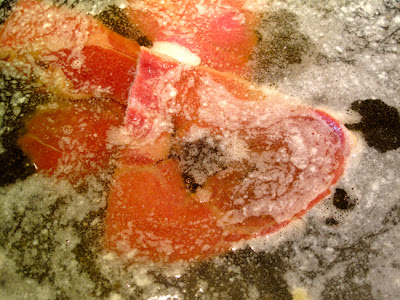 Periodically skim the bubbling butter foam to prevent it from burning. 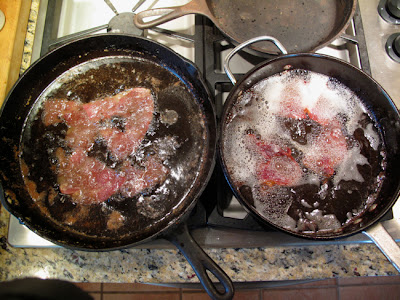 Remove the dessicated country ham from the fat and "reserve for other uses."  You now have two skillets full of ridiculously flavorful pig grease in which to fry your chicken. Just don't invite any cardiologists over for dinner.

After completion of the complex two-stage chicken marination process, I stirred the bubbling fat with abandon, coaxing every last bit of flavor from the slabs of country ham. Between bubbles, I prepared the "dredge" as Frank read out the ingredients to me from where he sat perched on a bar stool on the far side of the kitchen island. I was looking forward to the moment when the two of us would toil side-by-side, slipping the breaded chicken pieces into the twin skillets of now-flavored lard. "The next step I think should be to put the chicken in a colander to drain off the buttermilk," he suggested helpfully, while taking a sip of wine. I hastened from one patch of granite countertop to another, preparing the flour mixture and removing and draining the now-shriveled bits of ham from the skillets, all the while looking about rather frantically for a colander.

"We probably ought to get the tomato gravy going as well," said Frank, savoring his Sauvignon. "First, you need to finely chop a large onion, it says here."

I was starting to feel somewhat overwhelmed, but I was thankful for Frank's calm and encouraging presence there in the kitchen as he read more and more of Dame Edna's time-seasoned instructions to me in a reassuring and professorial voice. "Is the chicken draining? How's that onion coming? The guests will be arriving in about twelve minutes, and then we should probably start cooking," he said.

Start cooking? I had been under the impression that I already was. By now I was feverishly chopping gallons of tomatoes to add into the gravy. "You'll probably want to hold off a bit on adding the cream to that," said Frank, sharing the wisdom earned from years of experience, which I was so eager to absorb.

"Please, Frank," I begged. "The guests will be here any moment. I feel I'm not ready. I just don't have the experience necessary for the dredging process. Could you help me, please, oh Jedi master?"

Frank strolled over and began gently and expertly rolling the still buttermilk-moist chicken parts across the dishes of seasoned flour. This complex and burdensome task was for Frank but the work of a minute or two, and he quickly regained his observational perch as I slid the breaded chicken parts into the sizzling lard. 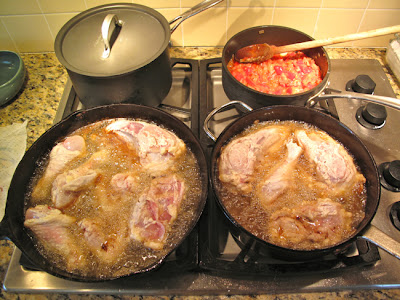 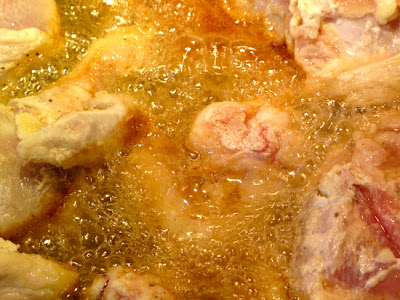 Cook chicken approximately 7 minutes per side. 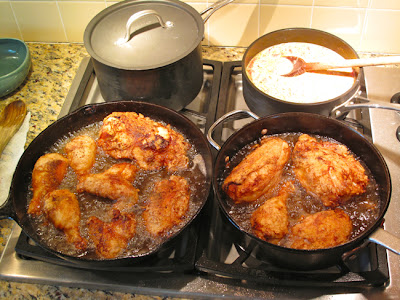 Until golden brown. You can underdo them just a bit, as after fifteen minutes in bubbling lard the interior flesh will continue to cook after you have removed the parts to a plate lined with crumpled paper towel. 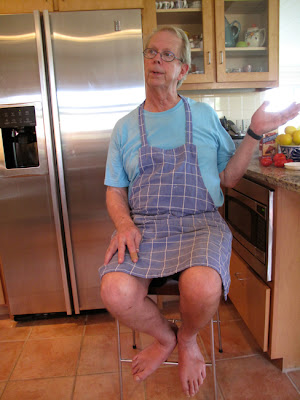 Frank Harmon, architect of the poultry, passionately engaged in telling me what to do cooking up the world's most delicious fried chicken. 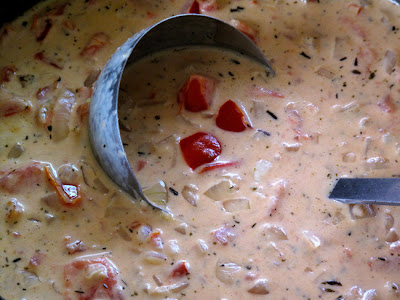 Peacock and Lewis' tomato gravy makes a fabulous addition to the lard-fried chicken, as it should, since it consists essentially of fresh Carolina tomatoes simmered in heavy cream. 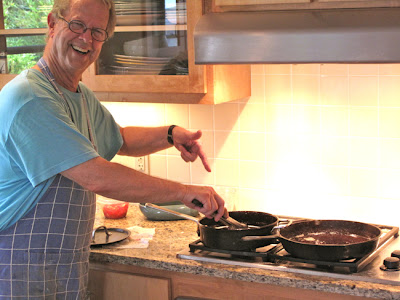 "Seeing as you've got your camera out, why don't you snap an action shot of me, cooking up the chicken?" suggested Frank. (Note lack of chicken; this is the culinary equivalent of a wedding photograph, or a "dramatic recreation" in a documentary film. Which is to say, fabricated out of whole cloth after the fact. All the chicken has already been consumed.) 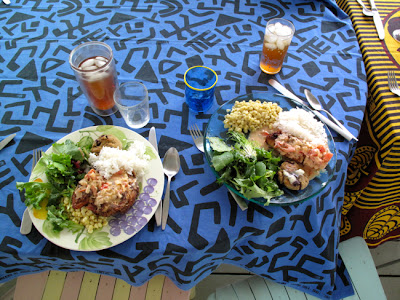 "Rococo employment of fats" was our favorite line! Hilarious recounting of a fabulous meal.