Deep in the Heart of Bavarian Staten Island

Three weeks ago or so, when Irene was just a hot breeze swirling around the Bahamas, Laura and I had an overlapping free weekday. Usually, we would head straight for Jamaica Bay National Wildlife Refuge, to see lots of birds amidst not so many people as on a weekend. This year, however, the unseasonable torrents of August rain and an administrative / budgetary snafu have left the East Pond, where the water level is normally manipulated to maximize its attractiveness to migrating waders, far too full for any self-respecting shorebird to pause there. "What do you say we explore the oyster-baron mansions of Staten Island?" proposed Laura.

"The what?" The murky, industrial waterfront surrounding Staten Island includes graveyards of rusting tugboats, miles of petroleum storage tanks and semi-submerged, expired ferries. But one hundred and more years ago, these now dubious waters teemed with oysters, and great fortunes were made harvesting them and serving them in the oyster bars of Manhattan and beyond. What's more, Laura informed me, a few of the grand residences of the oyster oligarchs might still be standing along Staten Island's northwest shore, enjoying a harborfront view of Manhattan.

It now costs $13 to cross the Verrazano Narrows Bridge, which is close enough to the ticket price at MOMA that we were determined to savor every moment on the "borough of parks." 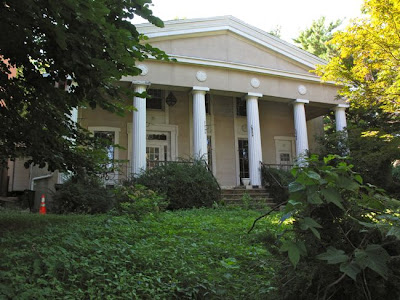 The nouveau-riche have always been fond of reviving the Greeks, and apparently the oyster magnates were no different. Now abandoned, the front yard wooly and overgrown, this titan is just waiting for a little bit of love and elbow-grease. One suspects it comes with a fascinating midden of oyster shells somewhere out back. 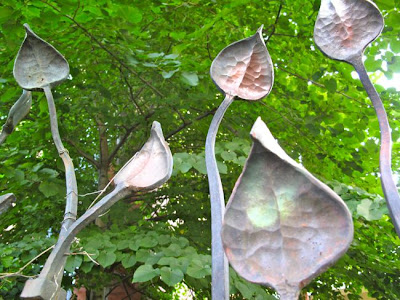 The wrought iron-fences, the closest one can approach, are more art nouveau than nouveau riche. They're very nice, and I'm frankly surprised no enterprising recycler-looters have never made off with them. 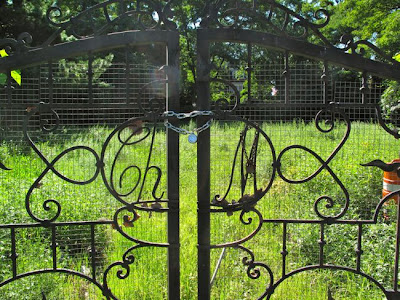 Right next door, there is no house left at all, only competing wrought iron gates complete with the presumed initials of an oyster magnate in the style of a champagne bottle label, demonstrating a certain consistency in the dominant Staten Island aesthetic over the years. 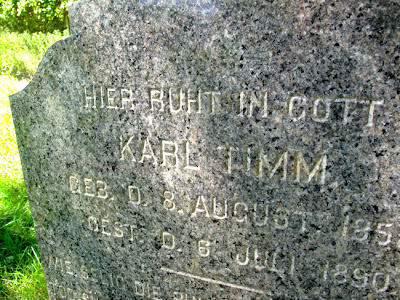 We followed the shore south and west, around the channel of the Arthur kill. There seemed to be no further evidence of the splendid oyster epoch. Suddenly we stumbled into a corner of Bavaria, not far from New Jersey, and providentially just in time for lunch. Almost across the street from a shady and overgrown graveyard filled with headstones of first generation immigrants from the old country, we found Killmeyer's. 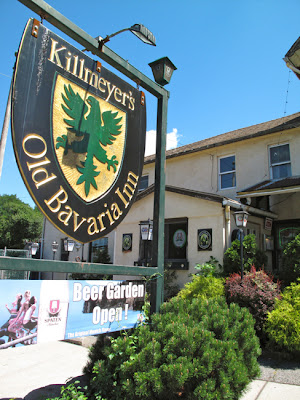 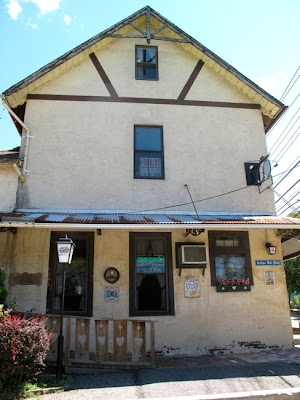 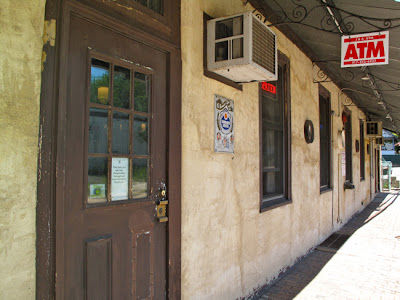 Except for the ATM sign and the slot-mounted air-conditioner one would swear one was in any of countless villages in the surrounds of Munich. 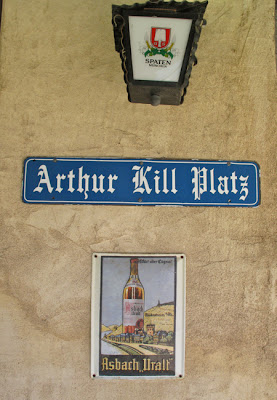 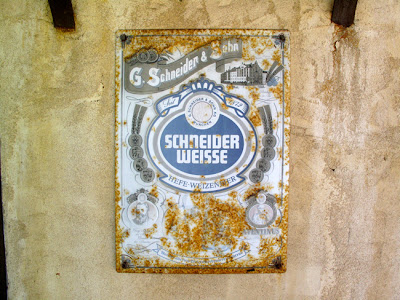 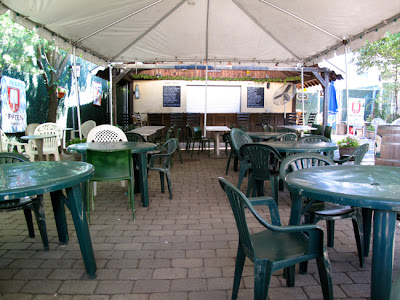 We made for the tented biergarten in the back yard, empty of people on this weekday noon, but crowded with plastic Wal-mart patio furniture. A dirndled waitress, somewhat surprised to see us, soon brought us the list of spezialitäten. A blackboard on the wall listed an impressive array of deutsche brews. Traitors to the south, we ordered refreshing tankards of Gaffel Kolsch, a beer so delicious that it inspires in me the hope of one day visiting Cologne. 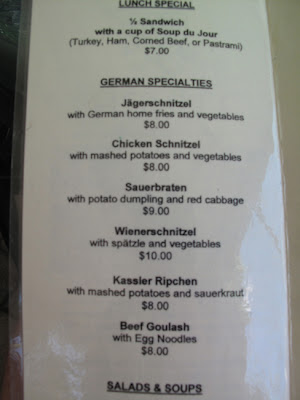 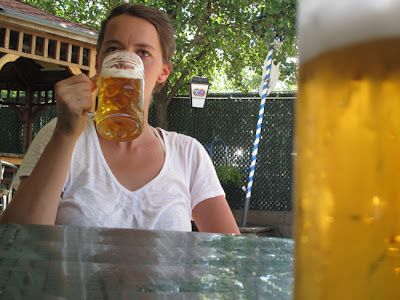 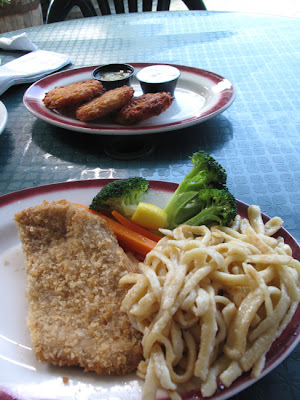 Latkes, and spaetzle mit wienerschnitzel. The latter seemed perhaps to have been breaded and frozen somewhere back in the old country, but we weren't really there for the food. Apparently on weekends Killmeyer's features their own local oompah band. 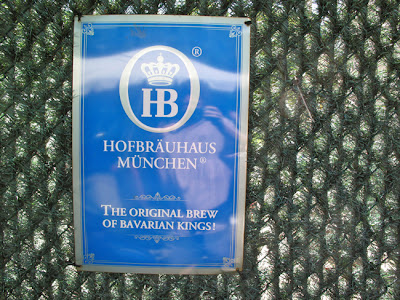 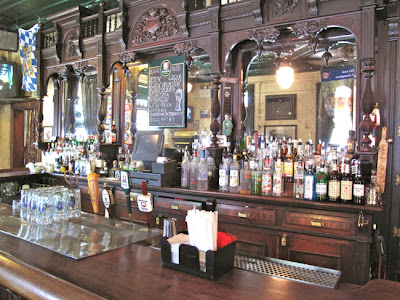 After this unexpected transatlantic adventure, we wended our slightly blurry way back to Brooklyn, where we regaled our good friend and favorite saloonkeeper St. John Frizell with our tales of intrepid outerborough exploration. "OMG!," he said, "You've discovered Killmeyer's. I love that place. Did you see the bar? It was built by itinerant Czech carpenters. Apparently they just traveled around stopping into places and offering to build authentic Praguian furnishings. Isn't it spectacular?" Absolutely, we agreed at once, and made on the spot a vague plan someday to return together, and polka. 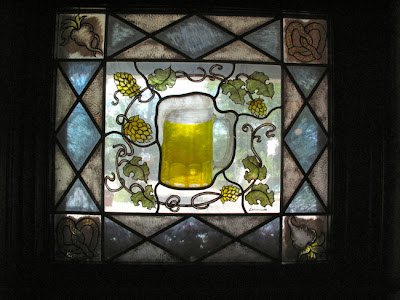 I never knew my fellow hill tribe members left such a succulent footprint on the outter burough.

Succulent, meaning toothsome or delicious, might be going a bit far. I would have to say that the ambiance won out over the cuisine. Killmeyer's isn't exactly the Viktualienmarkt!

Andrian said...
This comment has been removed by the author.
06:52

That's why they invented beer in BAvaria. You have a few and that selection of semi-prepared pork products accompanied by some form of potato just tastes like something really sophisticated.

Been there and deemed it not soooo Bavarian.
But fun and ethnic even for one of those Bavarian mountain country girls herself.
And yes, the food makes you less hungry at best.