Taman Negara, Malaysia's spectacular and gigantic park, billed as "the world's oldest rainforest," is home to some amazing creatures, including the great argus, essentially a long-tailed chicken, but one so spectacularly plumed as to make peacocks seem rather petite by comparison. Tigers live here, as well as wild Asian elephants and neck-crookingly tall mahogany trees. I saw some spectacular birds (but not the argus--I'll have to go back!), but one of the oddest creatures was this fish, out for a stroll along the driveway, in its own fashion. Casual googling suggests it is an anabantoid, or climbing gourami, one of a number of species perfectly content to leave the water and walk about on the land for hours at a time, presumably in the interest of expanding territory and range. 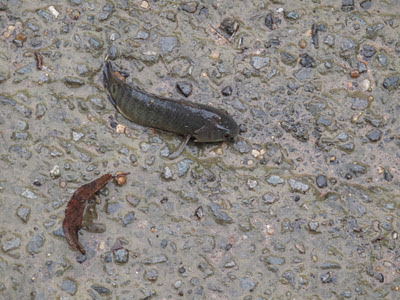 When I first saw this fish I had an experience you will perhaps share while watching the beginning of this video, namely that the poor animal was being pulled along by some unseen hand, in the manner of a Times Square prankster dragging a twenty-dollar bill along the pavement on a bit of invisible monofilament. I looked around, to see if someone was having me on. Then I followed this little creature for a good hundred feet. Strangely, it stayed on the asphalt. After a time, perhaps exhausted, or having concluded that it was not going to have the luck suddenly to come across an unknown pond, it turned around, and started moving back in the direction from whence it had come.