Here at antarcticiana we consider one of our core missions to be the calling out of mendacious, cynical and counter-human corporate behavior. Whenever possible, we enjoy battling greed and incompetence with snark and vitriol. But we aren't hypocrites, and when presented instead with excellence we feel duty-bound to share the good news with our vast readership. Therefore, we are proud to present the first ever antarcticiana award for superlativity in the field of customer service. The winner is USAirways.

Last week, I had a quick one-day job down in Virginia Beach. To get all the way there and back, and fit in a day of filming, required a bleary, pre-dawn trip to LaGuardia Airport, a USAirways shuttle to DC, and a quick USAirways connection onward to Norfolk. Under normal circumstances, I look at those promotional charging stations that Samsung now has dotted throughout the world's airports and I think: that's a recipe for losing your phone. In Washington I was still dozing, however, and my phone's charge was diminished. With a whole day in the field in front of me I needed all the juice I could get. At the gate at Reagan I plugged in, and then sat just a few feet away, half-guarding my phone while reading Keith McCafferty's The Royal Wulff Murders,

crime fiction set in the trout fishing paradise of riverine Montana.* A fellow crew-member appeared, the USAirways flight was called. Minor distractions. Guess what: Those Samsung charging stations are a recipe for losing your phone.

On board the Norfolk flight our kindly USAirways stewardess informed us that the USAirways airplane doors had been closed and that it was therefore time to turn off all electronic devices. I patted my pockets, but I already knew. I had a feeling of dread not unlike that induced by turbulence, although we were still on the ground. I stewed and seethed with self-loathing. Hadn't I said to myself, just as I was plugging in my immaculate Samsung Galaxy S-series smartphone: you're going to forget that.? Indeed I had, and indeed I did.

Once airborn I took advantage of the USAirways in-flight beverage service to explain my plight and ask for advice. The stewardess immediately asked for all the details. "I'll talk to the USAirways Captain, and we'll call it in," she said. "We should still be within radio range of Reagan."

"It's in a blue protective cover, and must most certainly still be plugged into the Samsung console just to the right of USAirways gate 35," I said, somewhat breathlessly. She handed me a USAirways napkin, on which I wrote down the salient details. Meanwhile, she went to fetch me a USAirways club soda. She returned, took the napkin, got on the cockpit telephone and described the emergency to the Captain. Minutes later, she came back to my seat again. "The Captain has spoken to our people in concourse "C," and they are sending someone from USAirways to look for your phone."

The DC to Norfolk flight is only some twenty minutes, and we were soon in the terminal. I borrowed the producer's phone and immediately called my own. It was answered, by a USAirways employee from baggage services. She had recuperated the phone and said it would be waiting for me at the baggage desk near the baggage claim on my way back through the airport that evening. Meanwhile, the pilot of the aircraft, overhearing my conversation, suggested that I call again before getting on my return flight, and said that baggage services would likely bring the telephone to my Washington departure gate. I was mightily impressed. Here I was, standing in the terminal, discussing my lost telephone with the archetypal Captain, a guy who had taken a pause from his busy day to discuss my problem. Silvery gray hair still cut in military fashion; gold bars on navy uniformed chest; that stentorian, reassuring voice I had heard over countless aircraft PA systems: "If worst comes to worst, call them up and they will Fedex it to you." USAirways.

Nonetheless, I fretted all the day long. The phone having been found was one thing, actually getting it back into my paws was another. I pictured the phone being tossed into a giant cardboard box full of other phones left behind at other Samsung charging stations by other morons. I carefully calculated the minutes we would have to transfer to our connection on the way home. Then, disaster. The Washington flight was delayed. The competent USAirways agent at the checkin quickly reticketed us, but through Philadelphia. A quick taxi-ride from LGA, and shortly before midnight I collapsed on the sofa at home, phoneless. By now, I was certain, the phone's battery would be dead, the post-it note someone might have stuck to it would have become unstuck, and it would soon join the vast graveyard of the expired and unclaimed.

The next morning, Fedex account number in hand, I searched through piles of old newspapers and dirty socks, looking for the landline. Reduced to using the speaker feature on the base station, I quickly reached a competent USAirways baggage services employee. On Friday morning my phone arrived, wrapped like fish in yesterday's DC tabloid. Thank you, USAirways! 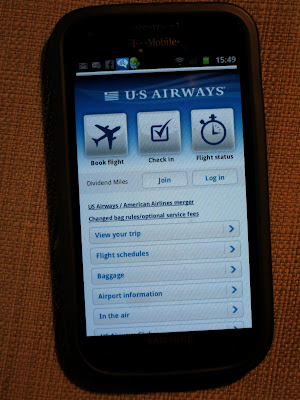