Not just another night at WD50

I had a crazy start to the week. My friend WoWe asked me if I wanted to join him and see what might dribble out the end of my pen while he photographed a gang of international culinary superstars spending 72 hours in New York to prepare for an all-star tribute dinner for Wylie Dufresne. Okay, I said, sounds like fun. Here's one of many possible dispatches: 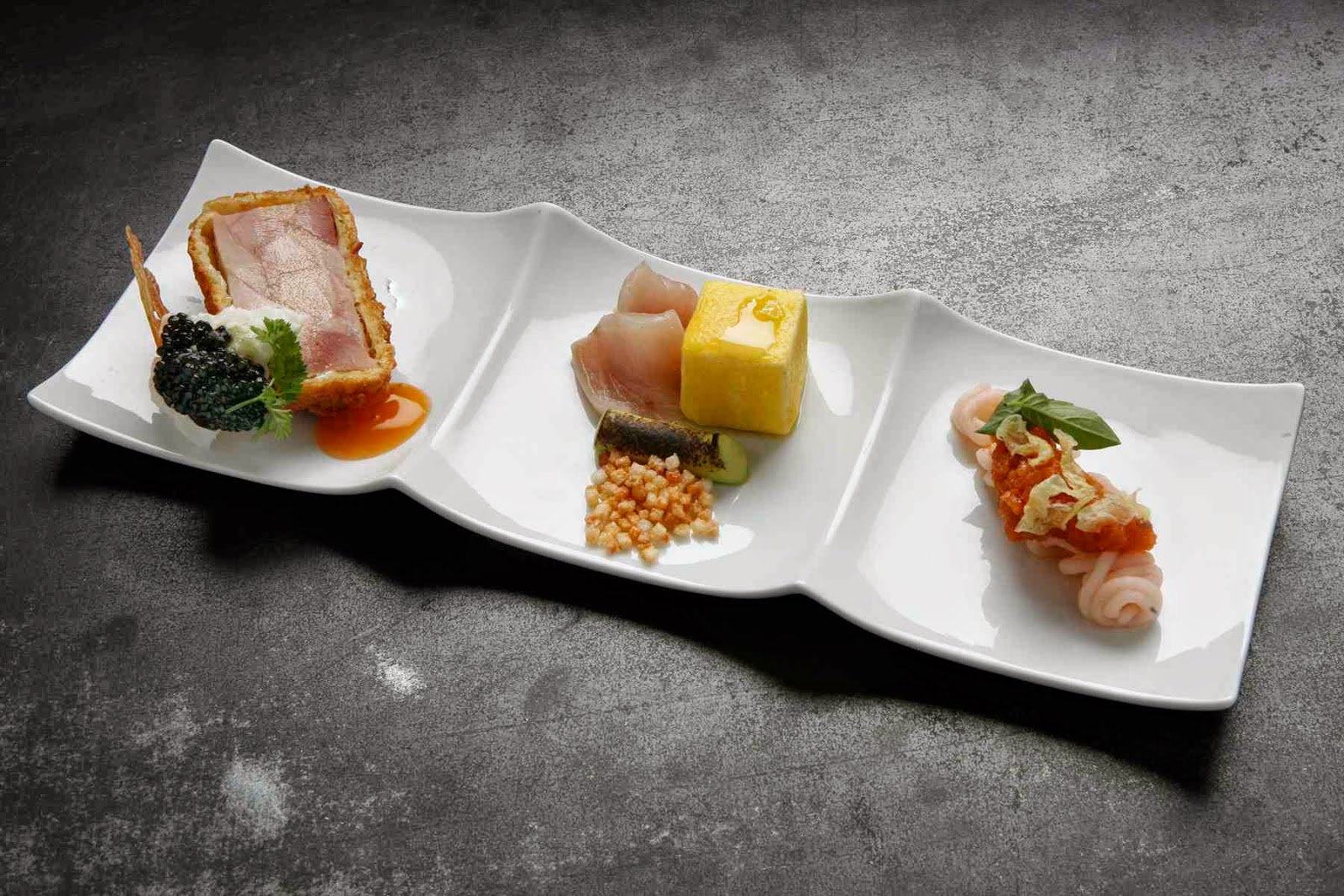 3 Dufresne dishes, with his famous "Shrimp noodles" on the right.

Last Tuesday afternoon on Clinton Street in Manhattan's Lower East Side, chef Wylie Dufresne's molecular gastronomy restaurant WD50 appeared to be closed. The sun streaming over the tenements made the windows glow a dull, mottled brown: they had been blocked out from the inside with lengths of butcher's paper, as if the place was under renovation. Inside, however, the kitchen was a hive of activity, full to bursting with an astonishing gathering of some thirty head chefs from the best restaurants around the globe. Apples were being cored and mousses were being frothed. Magnus Nilsson of Sweden's Fäviken and Agata Felluga of Jour de Fête in Strasbourg were hip to hip, braiding shallot shoots into little nests of “Longevity” brand noodles, purchased in nearby Chinatown. René Redzepi of Noma, ranked #2 on the influential World's 50 Best Restaurants list, was sampling a variety of hot chile infusions with Ben Shewry of Melbourne, Australia's Attica (#21). Iñaki Aizpitarte (#17) and Kobe Desramaults (#72--the “50 Best” actually has 100 restaurants on it) were piping caviar-laced chicken liver parfait into those cored apples.

Wylie Dufresne was not present. In the basement, event producer Alexandra Swenden had assembled a team that was madly editing video footage to be tweeted and uploaded later in the evening. Out in the dining room, seemingly immune to all the stresses of the kitchen, the impresario Andrea Petrini had only one concern: with hours to go until dinner would be served, could this giant international secret possibly be kept from the pioneering chef whose restaurant they had all occupied? 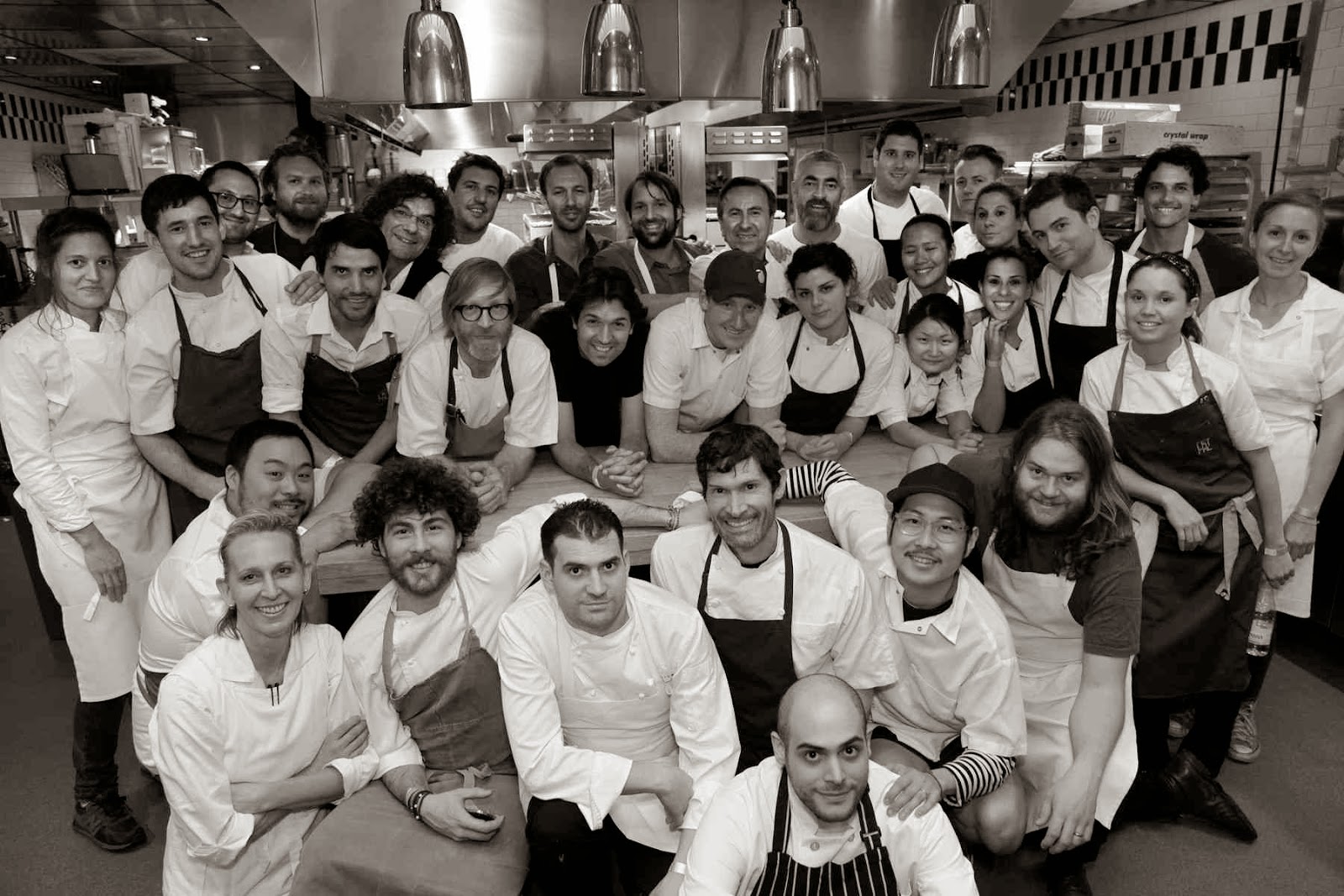 Agata Felluga, Blaine Wetzel, Virgilio Martínez, Fulvio Pierangelini, Claude Bosi, Daniel Burns, Ben Shewry, René Redzepi, Alex Atala, Rosio Sanchez, Ana Ros, Rodolfo Guzman, Karime Lopez, Magnus Nilsson, Danny Bowien, Daniel Patterson and Gabrielle Hamilton are just the people in this photograph I got to meet and chat with and even interview over the three days of Gelinaz! preparations. Daniel Boulud is in there, too, but I didn't really get to talk to him. I did meet him, at Frankie's Spuntino on Monday night. He walked up while I was talking to Frankie Falcinelli and when Frank introduced us he said “do I know you? I don't think I know you.” I don't think he intended to be rude, I imagine he was just wondering if I was some Gelinaz! chef he hadn't met yet, but I never quite recovered enough to ask him to talk to me later. David Chang and I had plans, but apparently he started running the kitchen at WD50 to get things back on schedule Tuesday night and so he eluded my interviewing stamina. That's why I'm only an accomplished home cook, not a chef. All the other people who aren't named: I hope to meet you another time and I don't mean you any disrespect.

This surprise dinner for one of their own was the most recent in a series of undefinable culinary events presented by Gelinaz!, a loose collection of chefs that is part think-tank, part spectacle and part gathering together of friends who like to cook. Petrini, a longtime food journalist and talent scout, is the co-founder and the cement that binds them together, much like the transglutaminase “meat glue” that Dufresne uses to make his infamous shrimp noodles. Coincidentally, this is likely the actual dish immortalized in the recent premiere of HBO's Silicon Valley as “liquid shrimp.”

Gelinaz! started in 2005 “as a joke,” Petrini told me. His good friend, chef Fulvio Pierangelini “was known world-wide for being a pain in the ass, always complaining that people were stealing his ideas and his recipes. So I proposed that he go onstage with a bunch of other chefs who were re-imagining his dish and we would do away with copyright forever.” Perhaps the only thing all subsequent Gelinaz! events have had in common is this core idea of many chefs concocting their own versions of a specific dish. At a June, 2013 event in Ghent, Belgium, diners were served twenty interpretations of an 1861 Cauderlier recipe for chicken in pig's feet jelly.

We live in an era uniquely obsessed with food and its preparation. Cookbooks, now almost invariably tied to a particular chef and restaurant, are one of the few thriving areas in “old” publishing, despite the mind-boggling number of recipes and preparations available on the web. As evidenced by HBO name-checking Wylie Dufresne, high cuisine is pop culture, and an art-form. Last night's dinner is as worthy of conversation and serious discussion as the latest Wes Anderson film or that recent museum show that just opened. “We live in difficult times,” Petrini explained to me as I was trying desperately to dodge hot saucepans and scurrying sous-chefs. “Food is something that can reassure us”. The old standard of excellence in food was the Guide Michelin, which, Petrini says, “judged food by the criteria of the upper classes.” The idea was that a regular family would save its money to go to a great restaurant, perhaps once or twice a year. Today, that seems absurd. “For young people,” Petrini says, “food is everywhere.”

On the web, we have instant access to menus and photographs from the most far-flung of the world's temples to eating. Places like Nilsson's Fäviken, in a remote corner of rural central Sweden, would likely never have become must-eat destinations without the information era. But meticulously prepared food is not a commodity that can be ordered from Amazon. The global promise of the internet has also brought a great uprooting which with food has had the paradoxical effect of making us desperate to regain a sense of place, a sense of craft. We want access to unique ingredients and preparations that in the past might have remained unknown. Craft in general, and food in particular, is an antidote to the emptiness of consumer culture, and to the mass production and anonymity that are the less welcome side effects of the information technology explosion. Food grounds us, and an innovative, memorable meal is something everyone can aspire to create. It is no coincidence that so many of the World's 50 Best chefs here, many assisted along their way to stardom by Petrini's significant influence as its french chairman, are foragers, cooks who make it a point of pride to use ingredients so fresh and so local that they are often found growing only in the immediate surroundings of the restaurant. Places like Noma and Attica turn the winemaking notion of terroir into a guiding culinary principal. 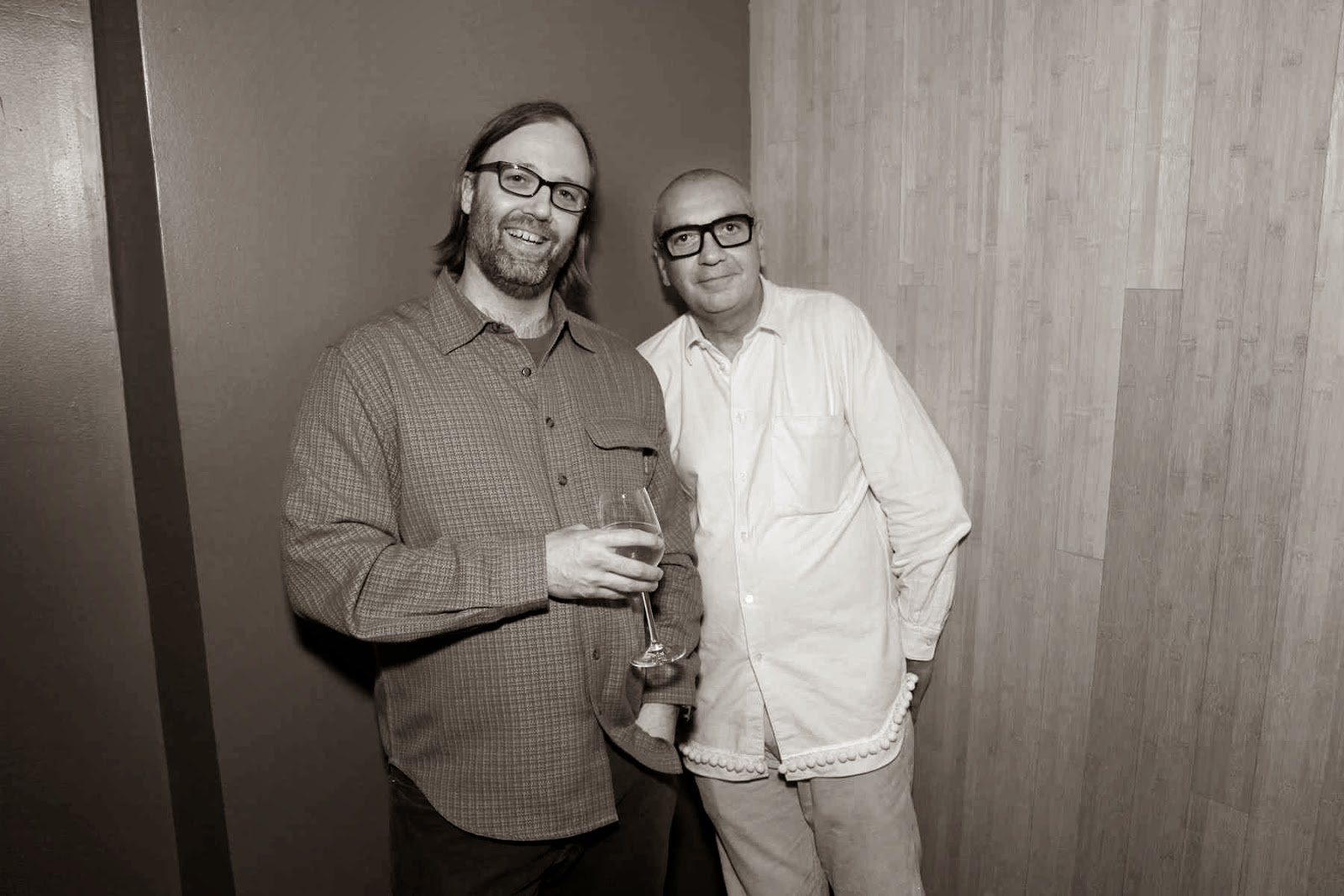 Petrini is modest, with a profound sense of humor he expresses daily in his wry smile and his choice of wardrobe. At WD50 he was wearing a pale lemon-colored flannel shirt trimmed all the way around at the bottom with a row of dangling white lace balls that looked as if they might have been stolen from your grandmother's lampshade. “I'm not trying to influence anything,” he said, but chef after chef commented that they first met Petrini because he came to eat at their restaurant when it was still comparatively unknown. Rodolfo Guzman struggled for five years to keep open his restaurant Boragó, in Santiago de Chile. Then he was named #8 on the Latin American 50 Best list. “Overnight, we were booked one month in advance,” he explained to me, while picking through his arsenal of endemic Patagonian murtilla berries. “It was like a gift. It's why I am here.” Redzepi remembers meeting Petrini at Noma only a few months after he had opened: “That's why he knows everybody, because he discovered everybody.” 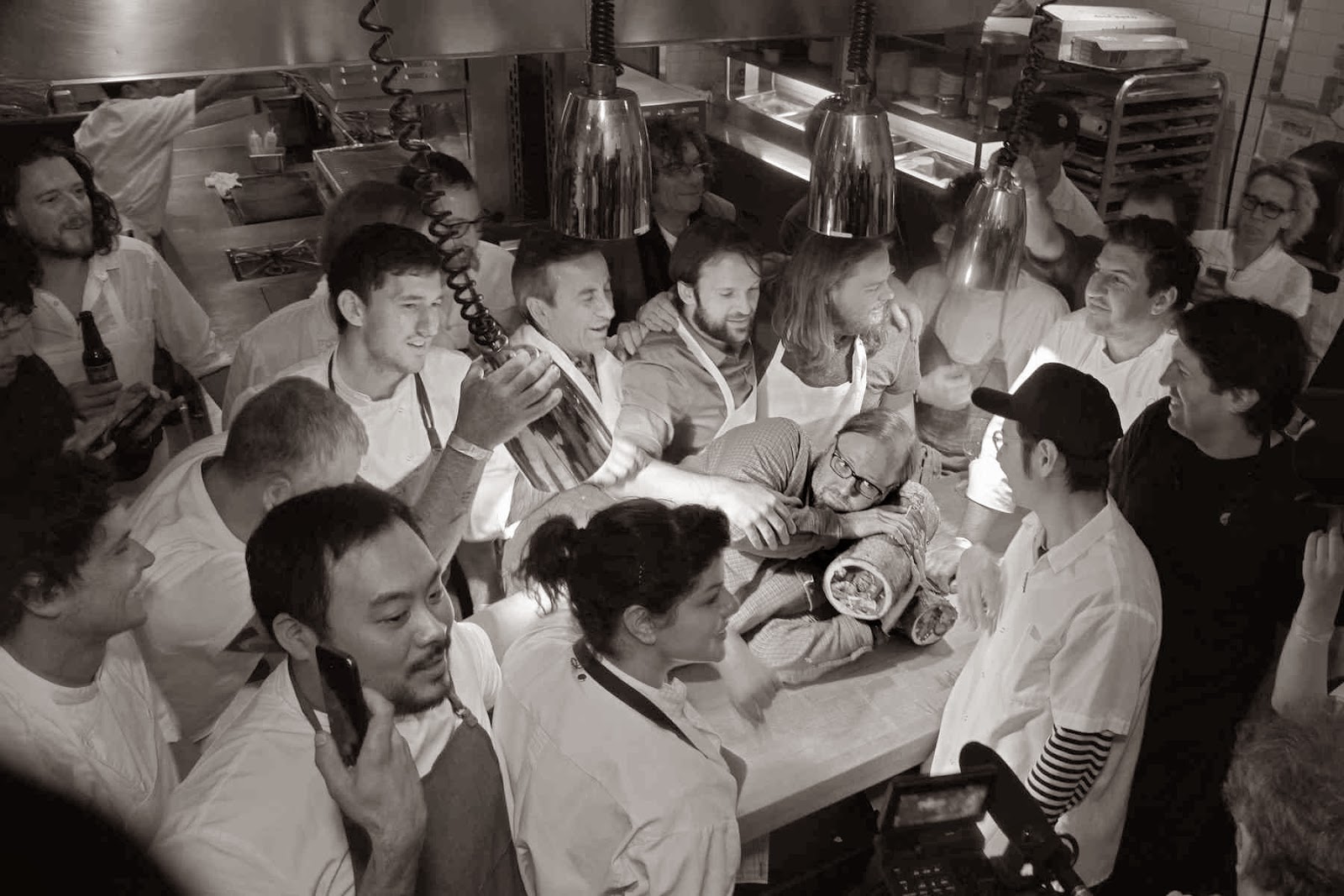 The chefs gather around unwitting host / roastee / honoree Wylie Dufresne, stretched out on his own work table.


At WD50, time was running short. The sun had set, and Dufresne was due to walk through the doors at 7:30 PM, lured to the restaurant on his day off by bogus reports of a refrigeration catastrophe. The ten-course meal--what Petrini called “remixes” of three of Dufresne's signature dishes, including the shrimp noodles—was as ready as it could be. Seventy non-paying guests—each chef had invited two—were hushed into silence in the dark dining room. In the kitchen behind, the lights dimmed; the only sound to be heard was the roar of the range hoods. Thirty of the world's best cooks had worked seamlessly together preparing for this moment, their egos apparently left at home. Now they crouched in the gloom in their colleague's kitchen. Precisely on time, Dufresne entered. In the middle of his own dining room he was greeted with a wide-screen television playing videotaped greetings from one chef after another. “Where are they?” he murmured in the dark, “where are they?” Suddenly, the lights went on, and there they were, hugging him, and serving him reimaginations of his own food. At once the world seemed smaller, friendlier, and a whole lot more delicious. 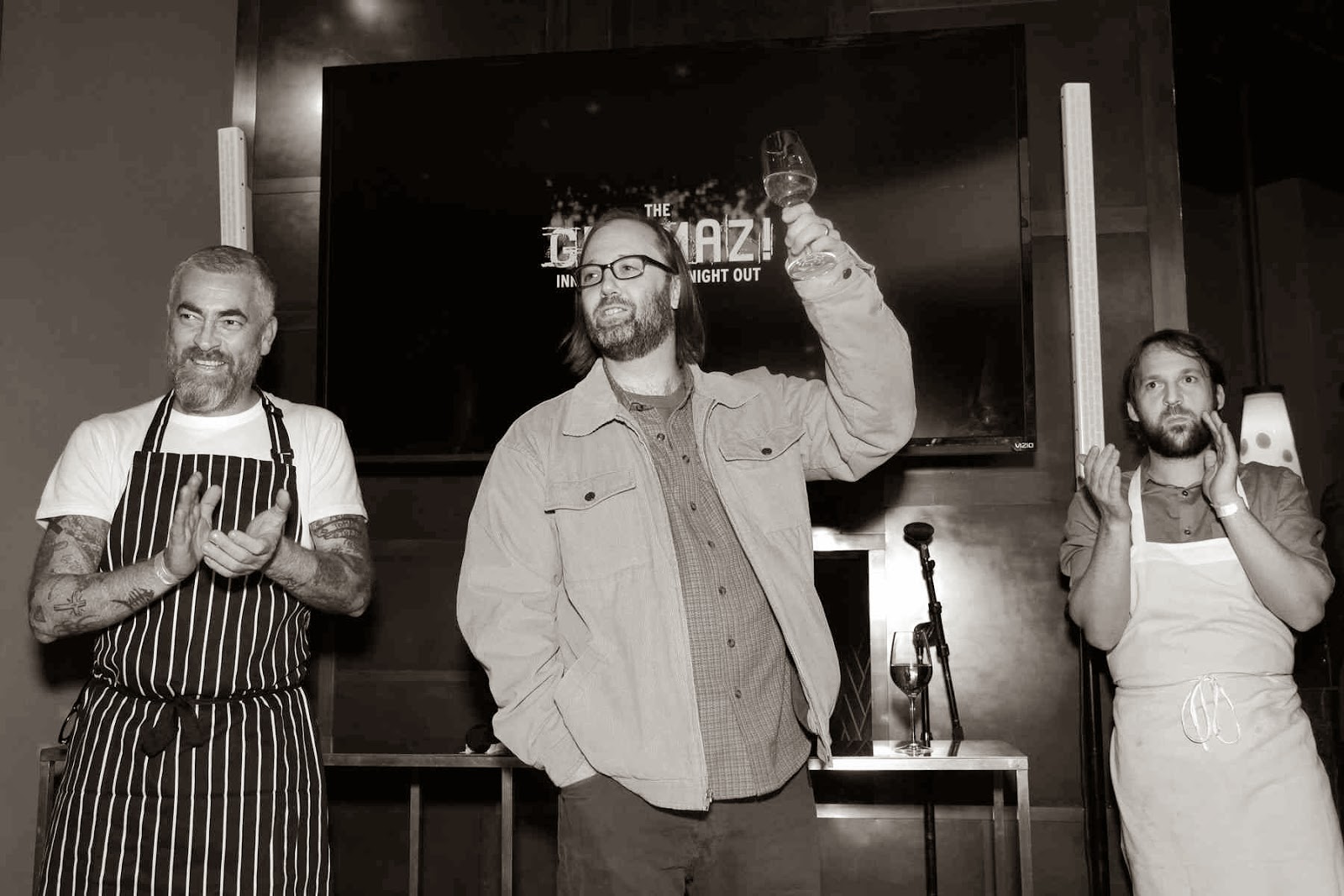 Update: I don't want to jinx anything, as it hasn't run yet, but this story has now been acquired by the Suddeutsche Zeitung. If you want your own story, be in touch, as I have many more.

Another Update: A gently longer version of this story will run in the Suddeutsche Zeitung Feuilleton tomorrow, April 19th, with more images by WoWe.