Putting the "Twit" back in Twitcher 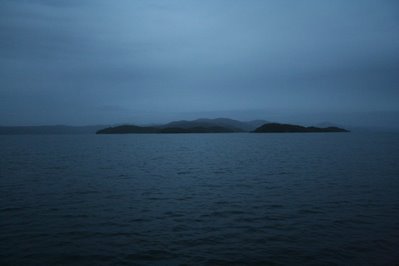 A few nights ago my friend Kara and I went Kiwi spotting. The national bird, nickname, trademark, and essential identifier of all things New Zealand, kiwis, of which there are actually three, or five, or possibly more species, depending on which authority one turns to, are quite rare and difficult to see in the wild. They are nocturnal and flightless, and their numbers have been decimated by all manner of introduced predators, from dogs to stoats and rats.

At 9pm dusk was just approaching here in the far southern hemisphere summer as the two of us, along with fourteen other avid kiwi fanatics, clambered aboard guide Philip Smith's boat, Wildfire, at the main wharf in Halfmoon Bay. Halfmoon Bay is the urban megalopolis at the throbbing heart of Stewart Island, population 370, well to the south of the southern tip of New Zealand's South Island. The cruise, Smith explained, involved a thirty-five minute boat ride to a sheltered inlet, followed by a nighttime hike across 500 meters of forested island spit to Ocean Beach where, he assured us, his operation had so far this season maintained a 100% success rate in the matter of the spotting of wild kiwis. I took this generous and enthusiastic proclamation as an ironclad guarantee that on tonight's excursion absolutely no kiwis would found. (I remembered reading in Smith's brochure we regret that we are unable to offer a refund in the event that the kiwis are uncooperative, or words to that effect). As the deckhand cast off the ropes, it began to rain. 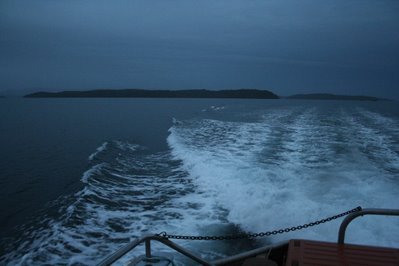 In the wake of the Wildfire

My mood brightened as we motored out into Paterson Inlet and encountered various parties of little blue penguin bobbing in the sea en route. I had before had fleeting glimpses of this smallest of all the world's penguins, but they are so quick to dive and spend such a very long time underwater that I felt entirely unsatisfied with my previous sightings. Now, with night falling, their hard day of nonstop fishing was perhaps done, for many of them seemed content to loll about on the surface as we passed.

At a distant, rickety jetty, Smith extinguished the motor and briefed us in preparation for our kiwi-spotting adventure. We were to walk silently and slowly, in single file, but bunched together as closely as possible, spotlighting in the undergrowth beside the track as we hiked up and over the spit to the beach. Flashlights were distributed, cautions were issued.

It was by now dark, and a light rain was falling. From the jetty a mossy, treacherous limestone stairway led up the face of a cliff and into the bush. We set off, shuffling closely together like penguins. Fifteen flashlights pierced the gloom beneath the low coastal canopy of gnarled and windblown podocarps. We continued on, kiwiless. With nobody speaking and only the eery illumination of the jiggling flashlights lighting the way, the procession took on the character of a satanic pseudo-Rosicrucian cannibal death cult, as in a bad film. "Where's the Kool-Aid?" I whispered to Kara. We appeared to be on the way to a secret location where we would all participate in some bizarre nocturnal ritual, except that instead of wearing floor-length red velvet hooded monk's robes and carrying black candles we were all dressed in Gore-Tex and fanny packs and sporting Petzl headlamps.

We arrived at the beach, obviously not having seen a kiwi "along the track," as Philip had suggested we might. Just as we emerged from beneath the sheltering foliage it began to rain in earnest. P. Smith had us all gather round in a sodden huddle. Pointing his flashlight into a pile of beach-washed kelp at his feet, he gave it a kick. A mass of sandhoppers, revolting albino insect-crustaceans, leapt about in the beam of light, trying to get out of harm's way. "That's what the kiwis eat," said Smith, in a confiding tone.

Snapping off our torches, we fanned out behind him, advancing slowly, like paratroopers in hostile territory, as he panned the beach and the high-tide line of rotting seaweed with his portable spotlight. On we marched down that beach, a phalanx of eco-tourists, soaked and sandy and vaguely itchy from an imaginary onslaught of sandhoppers. In the gloom ahead I sensed the cliffs marking the end of the beach and knew without a shadow of a doubt that we would soon arrive there without having seen so much as one of the jurassic hair-like feathers of the Stewart Island brown kiwi. Philip paused and pointed his flashlight down at the sand. "These are the tracks of the kiwi," he said. We all stared intently at these proofs of the existence of actual kiwis. They seemed to me indistinguishable from those of a healthy chicken. "But these ones are from last night," he finished.

As silently as possible we continued down the beach. Below the high tide line stretched a second line of washed-up seaweed, black bulbous pods tightly filled with air dotted along the sand. One hapless kiwi-spotter stepped on some and there came a series of loud, explosive pops, as if a child were playing with bubble-wrap. Quickly Smith gathered the group together one more time, like a teacher who hadn't seen just who threw the spitball. "We all need to try and avoid treading on this row of seaweed here," he whispered politely, as if no one had yet stepped on it. "The popping might spook the kiwi; they have very sensitive hearing." The rest of us scowled at the culprit, who had doubtless ruined Smith's perfect track record, and our evening. 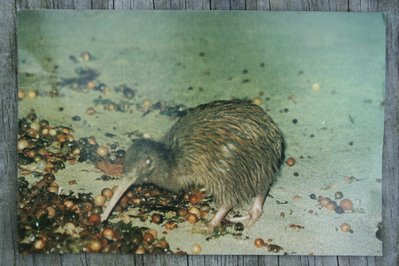 What a kiwi looks like; unfortunately this is the kiwi on Philip Smith's promotional postcard

Fifty yards further on Smith paused again, and clicked off his lamp. We pulled up short, standing in the darkness, the only light a vague and blurry glow from the spume atop the crashing waves. "There's one just up here," he said. None of us had seen a thing as he had waved his lamp back and forth across the sand. What had he seen that suggested a kiwi? He turned on the lamp again, and pointed it up towards the dunes, illuminating the line of slick and slimy kelp. And there it was, looking like nothing so much as an extraordinarily hairy coconut husk on a pair of Mr. Potato-head legs, rooting about in the putrid, rotting seaweed with its long and flexible beak. Through my binoculars the luckiest of the sandhoppers flashed white as they sprang to safety past the lamplight. The kiwi thrust deep and fast into the sand, a round, brown, hirsute sewing machine, gobbling critters. It then waddled to a creek, which there entered the sea, and proceeded to drink, pointing its great beak skyward to get each mouthful of water down into its belly. Tremendous. We all tried our best to staunch our oohs, and aahs. "It's a male," said Smith, whispering. "The female can be up to 20% bigger." At last, apparently oblivious to the presence of our large group of salivating eco-geeks, the kiwi wandered up over the dunes and lost itself in the scrub. 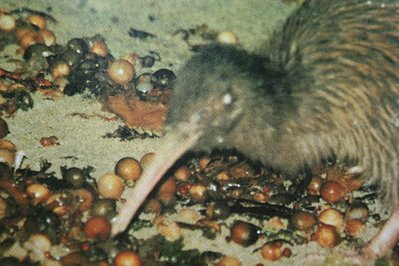 Kiwi postcard detail (thankfully no flash photography allowed, so no image of the "actual" bird we saw...)

On the hike back through the forest we found another, a smaller, juvenile female that Smith said was probably that year's offspring. Kiwis are the only birds to emerge from the egg fully fledged, and live their first four or five days on the egg-sac, which they absorb. Then, already quite large, they immediately go out and feed, just as the adults do. This one appeared to be rooting for worms and insects amongst the leaf litter. Soon it meandered off the path, deeper into the bush, and we made our way back towards the bay waters. Tired and soggy but sated with kiwi, we reboarded Wildfire for the trip home.

2605, for those who are following along.